Today I went to an Estate Auction. It has been several years since I went to one. Auctions are normally on Saturday, and I would rather go yard saling than bid against the pros. But, since today was Sunday and there wasn't much else to do in the junking world, we went to the Auction. It was in a small town with not much else to do, so I assumed it would be crowded. Sadly for the people having the auction, there weren't many of us there. Luckily for those of us that were there, we got some good deals. This was an auction at someones house - everything sold lock, stock and barrel - As Is. 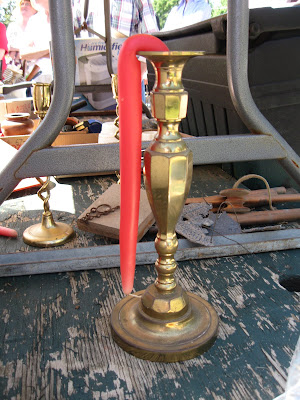 Did I mention that it was hot?
*I took this photo on the sly because I thought it was funny. When the auctioneer finally held it up for bids, the ladies made quite a scene over it. The auctioneer got sort of embarrassed at first, then he did a big old belly laugh. *And no, I did not buy this! 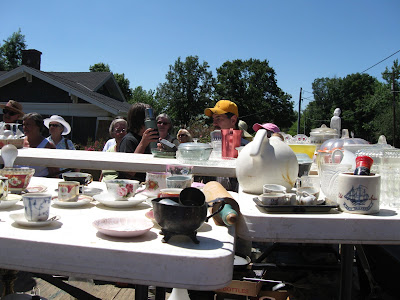 *See that aluminum pitcher in the back? It sold for $22.50. The old man beside me watched the ladies bidding on it. When the bidding ended he said, "Jeezus Christ. I got a whole damned cabinet of them damned things."

There were tables set up on top of a flat bed trailer. Everything was sold either by the piece or by the box. And, if something didn't sell, the Auctioneer just kept adding things to it until someone bid. You'd think that sounds like fun, right? Well, it is until you bid on one little box of vintage Christmas items and you find that you have just bought eight boxes of random Christmas Crap, a box of baskets, some old hats and a broken down old chair for your lowly bid of one dollar. And, there is a big sign saying, "IF YOU BOUGHT IT, IT MUST BE REMOVED FROM THE PROPERTY." Oh, nooooooooo. 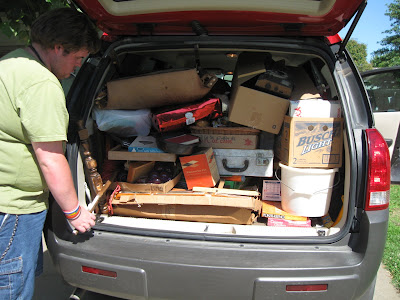 So, that is how the car got filled up to the brim with auction junk. I had also found a yard sale on the way and bought a couple old train sets, a bunch of old board games and a set of Highlights Which Way USA books for cheap. (The books are already on ebay - a set sold last week for $103.00!) The broken down old chair got broken down even more by The Breadman and The Bean so it would fit in various locations in the car.

Whenever I go to auctions, I tell myself what I will bid on something and then I stop. Every once in awhile, I will go up one more bid and the other person drops out. Since it's only another dollar, it is worth it to try if it is something I really want. Case in point. The reason I actually went to the auction was in the listing I saw PICNIC BASKET. Since my number one "want to find item" this year is a red Redman picnic basket, I thought this might be it. Well, it was a Redman basket, but more of an orangey color. I decided I would go as high as five dollars because I really didn't have to have it, but I do like them, so I would like to have it. I bid to $4.00, then a guy jumped in at $5.00. I was going to stop, but I went ahead and said, "$6.00" and the other guy dropped out. So, I got it for $6.00. Not bad!

When we first got there to do the walk through, I spotted a shoe box crammed full of old livestock ribbons from the 1950's and 1960's. There were a bunch of fancy Grand Champion Ribbons as well as a lot of first, second, third and fourth place ribbons. I told the Breadman not to faint, but I was going to go as high as $20.00 for the ribbons. I knew they were treasures. I leisurely pulled some of the less fancier ribbons to the top of the box as I was looking. (Trust me, everyone does it - try to make the box you want look less appealing to the rest of the crowd.)

The Auctioneer started in the house, then worked his way out into the garage. He worked his way down the driveway leading towards the box of ribbons. I had my number in my hand, trusty old number 68, itching to get to those ribbons. Down the line we went as he sold old pictures ("These are OLD - look at all the dust!"), small tables, boxes of books, boxes of old newspapers, a pair of old roller skates in an old metal skate case (sold to ME for $1.00 "Look for her skatin' down the street ta-morrow!"), some old toys and then........to............my.........ribbons. He said, "Now here's a box of ribbons for those of you who ain't worthy of winnin' any yourself!" I was thinking how badly I wanted the ribbons, but I had to watch myself to make sure I didn't get all wrapped up in the bidding and go over my $20.00 bid.

The Auctioneer picked up the box of ribbons and held them over his head....."TWO dollars, who will give me TWO DOLLARS?" I quickly bid the TWO DOLLARS and waited. And, waited. And do you know what? Not one single solitary person at that entire auction was even remotely interested in those ribbons. I got them all for TWO DOLLARS. 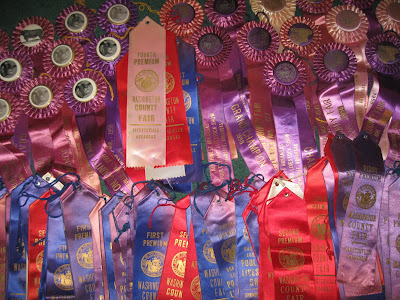 And, even though no one else even wanted them, I clutched them to my chest like I had a box of diamonds. I carted them around for most of the auction, thrilled with my purchase. 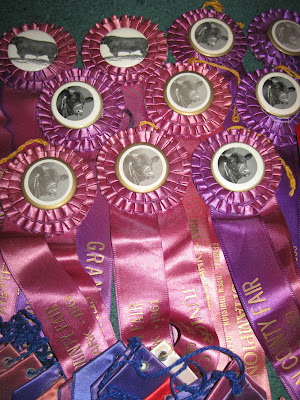 I am loving these Grand Champion prizes with their sweet purple and pink ribbons. This man worked hard to earn all these ribbons. I can't believe someone in the family didn't want them. But, I'm glad they didn't or I wouldn't have gotten them for TWO DOLLARS! 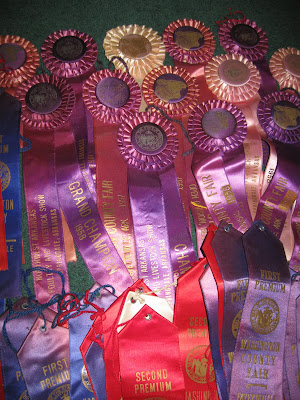 I bid on a stack of old games - Scrabble, Dominoes, Playing Cards, Poker Chips, and the like. I bid $1.00 and I guess he was trying to up the bids, so he kept throwing more an more on the pile. I ended up winning (if you can say winning) the whole pile for my original $1.00 bid. Part of what he added on was a huge box full of linens. Well, linens are my thing, but these were mostly old sheets, old towels and old rags. And by saying OLD, I mean not vintage - just old yucky stuff. But, when I got it home, I decided to go through it a bit closer. I was happy to find several old flour sacks, a couple flour sack towels with appliques on them and a vintage (not old and yucky) linen tablecloth still in it's original package. So, even though I didn't bid on some things, I still won them. And, I ended up with something decent in each box.

When it was all said and done, I had spent $23.00, which was only $3.00 over what I had anticipated in paying for the ribbons alone. So, I did pretty good! I spent about an hour in the front yard sorting it all out. I have three boxes and a couple of bags going to the Super Cheap Thrift on Tuesday and two boxes out by the curb for scavengers or the trash men, whichever comes first.

The auctioneer told me that there was another sale in town next week with high end furniture and antiques. I will probably go - I love to see people with deep pockets bid on things - especially when I am not interested in buying whatever it is they are bidding on! And, sometimes, I get lucky and they turn up their noses to old boxes of Christmas ornaments and maybe even some more Grand Champion ribbons!