Thursday I needed a mental health day, so I went on a ride through the country, out by the lake, over to the next county then across the line of Oklahoma and stopped in at the casino.  I had a free meal ticket and a $5 Free Play - so why not.  I spent my $5 Free play - doubled that to $10, but then lost that and the extra $100 I had brought in with me.  The Bean was with me and I asked him to loan me a $20 until we got to the car.  Then I suggested we go into the HIGH ROLLER Room and each play $10, then leave.  Crazy talk from a crazy woman.

You can guess where this is going, right???

I hit the button and got a red screen - a red screen means you get a free spin and it will be a winner - usually one to ten times your bet.  So, I thought I was going to maybe win $100.  Whoop!

But, then, the screen went purple! 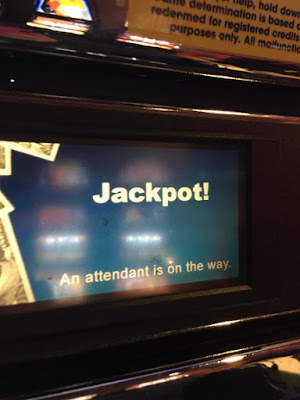 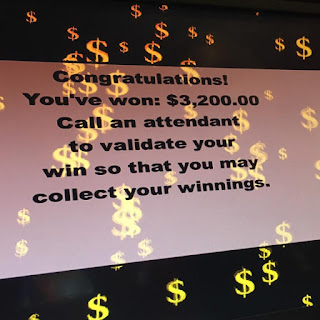 Things got a little blurry after that, but I know for sure I screamed, "CHRISTOPHER!!!! GET OVER HERE!"  And he came running.

It was very exciting.  VERY.

Not bad for a mental health day, right????

Well, hey!  It's been another wild and crazy month over here.  Everything is fine now, so that's what counts.  My Mom was sent back to the hospital - they thought she had a stroke - but it was really low potassium from all the diuretics that they had put her on in the first place.  She (we) spent one night in the hospital, then went home.  She was released at 8:00 that night too.  What is UP with releasing folks so darn late at night?  Sheesh!  Then at her one week check up from that visit, they determined her Potassium was too HIGH (from the diuretics they had placed her on....), so zoom - back to the ER.  It was pouring rain, thundering and lightening and there we were trying to park and unload at the ER.  The test at the Dr. was either false, or it had dropped during the day, so she went home that evening.  Actually, it was about midnight.  Crazy drive home in the pouring rain again.  But, she is feeling good and everything is good with her right now.  So, that is all that matters.

Two weeks ago, I came out of the shower and heard a hissing noise in the laundry room.  Opened the door and the washer hose was a) spraying water b) sparking and c) shooting flames.  What the heck.  I screamed for help and the three of us relay teamed and watched that the fire didn't catch - it was just occasionally shooting a little flame up (but a "little" flame is way too much of a flame in your house!), turned off the breakers and monitored the smoke alarm.  Every thing seemed fine except weird, so we continued on with our evening.  Then The Bean took a shower, but he came out pretty quick.  "I just got shocked in the shower, " he said.  What the heck?!?!  I decided I would call an electrician the next day.  Of course, that was Sunday, so that meant BIG BUCKS.  But, we really didn't want to be electrocuted.

Sunday the Electrician came, but he was stymied as to what was going on.  Everything he checked, checked out fine.  Then we realized we didn't have any hot water, so he checked the tank and IT started sparking.  What the heck?  He advised calling a plumber to look at the hot water heater.  (I know this is such a long and probably boring story, but it was a nightmare for us!)  So, we had no washer or hot water that night.

Monday I called Plumbers, but they all said that would be an electrical issue, so I called the Electrician back.  He talked it over with his supervisor and they were here within a few minutes.  The Supervisor told me that our house wan't grounded anymore.  The grounding had failed and the house was trying to ground itself, so it took the hot water line and tried to ground to it.  Nearly electrocuting us.  What the heck?  He said that he worked overseas - he had worked grounding 5000 shower rooms that hadn't been properly grounding and some servicemen had been electrocuted.  That's when I really realized how very lucky were had been.  It took all day to rewire, rebuild the breaker box, put in new grounding, add in a whole house surge protector and a surge protector to the hot water and A/C unit.  That cost $5000.00  Gulp. FIVE THOUSAND. Then we still had to have a plumber come fix the hot water heater for another $250.00. Plus the water buckled our bathroom floor and caused some other minor damages.

About a week later, I decided to call our insurance just to see if any of it was covered.  I really only thought the bathroom floor might be covered, but our deductible would probably be about as much.  Luckily, I got the nicest adjuster and she listened to my whole story, called the electrician and heard his version of the story (same as mine) and checked our policy.  Much to my surprise, about $4500.00 of it was covered.  So, getting it fixed properly and not being out Five grand, was a really good thing.  Oh, yea - and BONUS - not being electrocuted.  Whoop!

So, here's the point to this story - if you see sparks coming out when you plug in a plug, or you feel the tingliest tiny shock like a 9 Volt battery on your tongue, call an electrician and see if your house is properly grounded!  Also, if you have damages, call your insurance.  Be nice and ask questions.  They will help you if you have it coming to you. Keep track of everything too.  I mentioned not having the washer and hot water heater for a week and multiple laundry trips and they gave us $15 a load, which was super nice. Also, some of our issues were covered because there are new codes concerning using zinc rods and some other things - insurance pays for code improvements because that is out of your control.  At least our insurance did - your mileage may vary.

SO, WHAT HAVE YOU BEEN UP TO?

I've been thrifting as much needed thrift therapy and I re-worked my entire booth today.  Oh!  And they are filming the new season of True Detective in town and the set designers have been hitting my booth hard for 1970-80's items.  They bought all my vintage toys and some vintage kitchen stuff.  I can't wait to look for my stuff on HBO!