When Mr. Bunny showed up Missing last night I put some signs out by my mailbox asking "Please Bring Back our Bunny!" DH laughed - told me I was being silly. Ha Ha. Today we came home from errand running and low and behold, Mr. Bunny is standing on the front porch. His foot is broken and he needs a new paint job. But, he's back. It's nice to have him back, but mostly my faith is restored and I no longer think I have vigilantes and thieves running amuck up and down my street waving handguns and stealing garden statues.
Posted by Shara at 5:01 PM No comments:

Somebody ELSE got a Great Deal!

I am so MAD! Last night I notcied that my all time favorite garden statue is GONE! Stolen from in front of my house. It was a three foot tall concrete Jack Rabbit. I stopped at a charity sale late in the day and spied him under a table. Knowing he was out of my price range, I asked "How much?" anyway and "$2.00" was the magical reply that came back to my ears. I once saw a two or three year old boy stop and kiss that same rabbit on the top of his head then bid him farewell as he went on. I looked him up on ebay once and he was worth about $150.00-$200.00 because is was vintage and fabulaous. I am mad that someone stole him but I am even madder that someone violated me and came to steal him. This wasn't a person walking by - he weighed about 50 lbs. so it took some work to steal him. I don't care if it was a dumb teenage prank or a serious thief. It was WRONG! Bring back my RABBIT!
Posted by Shara at 10:14 AM No comments: 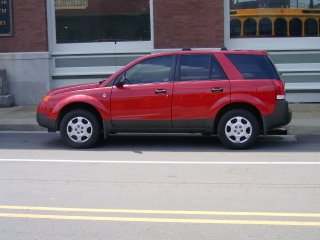 DS and I went to get the car ready for our vacation today. We had the oil changed and got new filters in the car so we "good to go." We have a Saturn VUE. I can'tremember if I have ever discussed Saturn on here or not. If you need a wonderfully reliable comfortable new car at a good price - go to Saturn. They are so fair to everyone - same pricing no matter who you are or waht you look like, etc. We got our VUE with no down payment, no trade in and we got 0% financing. And, believe it or not, I acutually had a $1000.00 coupon that they applied to the sticker price.

After we left the Saturn Dealership we went to Hobby Lobby since it is right next door. Right inside the door they had all their 4th of July merchandise for 80% off. I tried to walk by. I tried not to look. But, something caught my eye. I bought a life size stuffed Uncle Sam for $3.98. He was $19.99. He will look great sitting on the bench in the front yard. I also found a gazing ball that is made of mosiac to looklike a flag. It was $17.99 so I only paid $3.58 for it. I like a certain amount of patriotic stuff out all year long. Not Uncle Sam per say, but the gazing ball will work all year long.

I'll be without a computer for most of the next week which is sure to cause withdrawls, I am sure! It seems like hotels would have computers in them by now!
Posted by Shara at 5:00 PM 1 comment:

Went to my favorite thrift today. They still have the great prices of 15¢, 25¢, 35¢, etc. Clothes are 25¢ to $1.00. Today all clothes werem $2.00 for a Wal-Mart bag full. I bought two bags for $4.00 and must have gotten about 15 items. I alos bought a really cool colorized 1950's photo of a baby. Too cute! Also three ruby red rocks glasses that I might use for candleholders instead for 15¢ each and two nice vintage tins for flour and sugar for 25¢ each. Thought about reselling the tins, but might keep them for my flour and sugar instead. Unless there worth a mint, that is. ha ha.

I am known at the most trusted Mom in town. For instance - I am at the library right now for the Summer Reading Program. I brought my DS. I also brought my firends daughter and son. Then my other friend came in to the library with a flat tire and had to go have it fixed. So, I am in charge of her two until she gets back. She wanted me to take them home with me, but I can't fit five kids in my car! So, hopefully, she will b e right back so I can return the other two to their house and go home with my one and only son! Who knew I needed a cargo van for extra kids???
Posted by Shara at 1:49 PM 2 comments:

I had a job interview on Thursday for the school. It was for the "Parent-Volunteer Coordinator." After going to the job interview and realizing what they expected me to do - be forceful and authorative and travel a couple weeks a year - I decided I wasn't interested in the job. I went to tell the Superintendent to withdraw my name and he announced they had decided to hire the other person. Doh! He said she had some experience doing a similar job, so that is great. He did offer me a different job at the lower Elementary School working in the library. I have volunteered in the library a lot and love working there. But, DH and I decided that this might not be the best time for me to get a job what with DS starting Middle School and needing homework help, etc. I am known for volunterring a lot and he wants me to be able to volunteer at his new school just as much as at his old school. And I am going to chair the Teacher Appreciation committee for the PTSA, so I will be known at his school too.

Thursday morning DS and I went to the CHEAP thirft that I love so much. They had just put out all these great brand new shirts in DS's size - Croft and Barrow, Polo, Ralph Lauren, Old Navy, etc. He got seven nice new polo style shrts from 25¢-$1.00 each. Great back to school clothes at an even better price! I bought a bunch of stuff for resell and to keep, but nothing worth a zillion bucks or anything.

Friday DS and I went to the Salvation Army, the Atic thrift Store and a garage sale. DS found a nice vintage Selsi telescope at a thrift. I was amazed it was only $1.00. We checked out the moon and Saturn Friday night. I also found him 19 of the Magic Treehouse Series books for 25¢ each at the S.A. I bought some ohter misc. things, but nothing to get excited about. I'm in the market for a new super speedy computer to get my ebay stuff going on ebay fast. Since I'm not going to get a "real" job - I still like to make my ebay money. It helps me with my thirfting money and fun money to blow with DS on the weekends and summer.

We're travelling to Toepka, KS next week for a week. Plan on hitting a lot of BIG thrift stores while we are there. I won't have a lot of spare room in the car for big stuff, but would love to find a great deal! A few years ago I bought a 1972 Crissy doll in Topeka at the SA for $1.27. I sold her for $100.00 -Buy It Now - on ebay. That helped pay for the trip! You never know when you might find a piece of Maria pottery or Murano glass or...I can dream, can't I?
Posted by Shara at 10:15 AM No comments:

I am a BzzzAgent and they recently sent me a box of Hershey's Take 5 Candy Bars. I'm supposed to eat one and pass the rest out. Which, of course, I will do. But, since I can't GIVE each of you a candy bar - I wanted to urge you to try one if you haven't. They have a nice salty pretzel inside instead of nougat or a cookie. I like a like a little saltiness with my sweetness when I have a treat anyway. They are really good! If you have tried them, leave a comment so I can report it in my Bzz Campaign. If you want more info on becoming a BzzAgent click here for more information: www.bzzagent.com
Posted by Shara at 1:34 PM 4 comments: