...And Your Little Dog too!

There's a big Wizard of Oz party in blogland today. And, even though I'm not officially a part of it, I wanted to share my Wizard of Oz memories. I have many reasons to love the Wizard of Oz, two of which include being born in Kansas and surviving (albeit, in the womb) the 1966 Topeka tornado which was at the time, the most expensive tornado to date in US history.

My Mom has loved the Wizard of Oz since she was a little girl. We watched it every year. And only once a year. Because once upon a time, The Wizard of Oz was only on TV once a year. It was on the Friday after Thanksgiving at 7:00. Which also happened to be the exact time the roller skating rink opened. We went skating every single Friday night. With one exception. The Friday after Thanksgiving. I believe (and hope) that that was the only time in my life that I was a surly teenager. "Have to stay home so she can watch the Wizard of Oz. Puleeeeze. Like it isn't the same as it was last year! Hurumph!" But, I gave in and joined her in the "TV room" and we watched it and ate homemade caramel corn. Every year. And, even though I was a tad grumpy about missing skating, I did love the Wizard of Oz too. 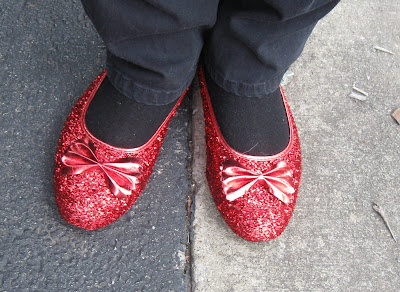 This January I took Mumsie and The Bean to see the traveling Broadway production of The Wizard of Oz. It was a late birthday gift to her. As part of her gift on her actual birthday, I got her a pair of Ruby Red Slippers. They were mostly a conversation piece and a fun gift. But, I'll be darned if she didn't actually wear them! She wore them to the play and let me tell you, they did not go un-noticed! It might have been partly because most of the ruby slipper wearing ladies were still young enough that the needed booster seats in their theater seats! One little girl came walking by and Mumsie said, "You have Ruby slippers too!'' And her Mother said, "Oh, she spotted you from waaaay across the room!"' The whole time the little girl was looking at my Mother with much admiration in her eyes.

I've picked up a few Wizard of Oz collectibles along the way at yard sales and the thrifts. 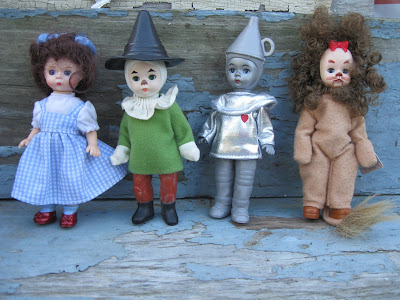 Dorothy, Scarecrow, Tin Man and the Cowardly Lion Madame Alexander dolls from McDonald's. I picked all of these out of various toy boxes at yard sales or 10¢-25¢ each. 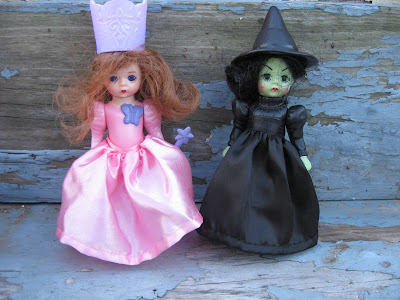 Glenda the Good Witch and her not so good sister, The Wicked Witch of the West. "I'm melting, I'm melting!" 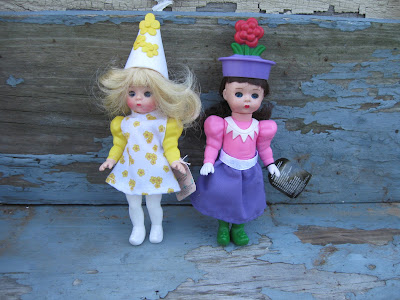 Lesser known characters - more from the book than the movie - a couple Munchkin girls. 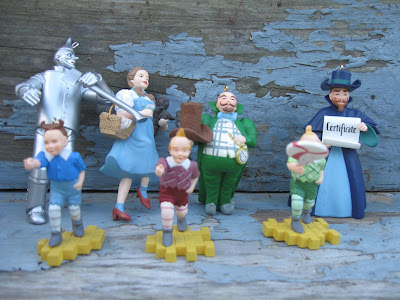 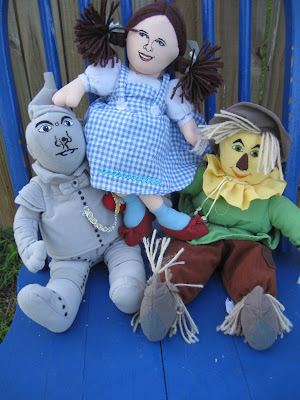 I won all fifteen characters out of the stuffed animal machine at Wal-Mart. I'm suprisingly good at winning in those machines. It usually only takes me one or two quarters to win. I have them all, but I could only reach these from the top of my storage bins in the garage. I am a bit of a Munchkin myself. 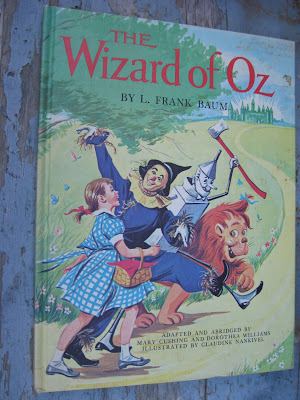 Then there are books of course. This big children's version has sweet illustrations. 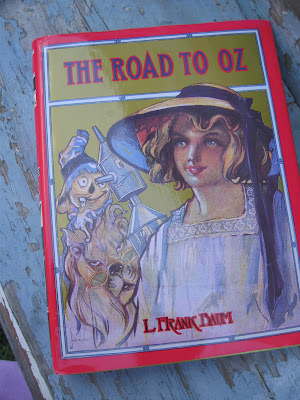 This book was give to The Bean when he was far too young to be able to read it. Mumsie couldn't wait to share her favorite book with her Grandson. 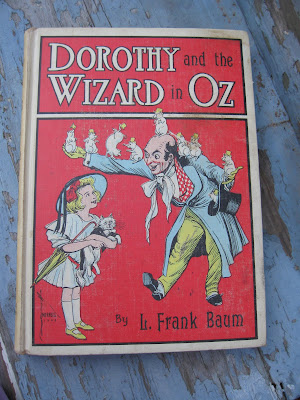 I adore this old copy of the Wizard of Oz. It has the sweetest color plates and graphics. I also have an autographed copy of the The Silly Ozbul of Oz and Toto written by Frank Baum's Great Grandson. I seem to have put it somewhere "safe" and now I can't find the darn thing!
And, lastly, these fantabulous Ruby Red Slipper tags arrived in the mail one day via the Wizard of Oz Lovin' Heidi. 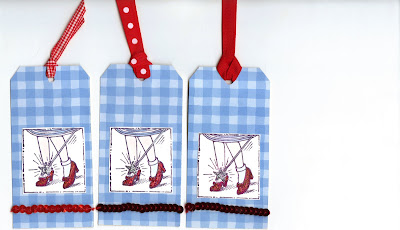 Aren't they fab? She was sweet enough to gift Mumsie with some as well. Mumsie has requested that these be put in her urn when she is gone. I think she likes them!
Posted by Shara at 1:05 PM