Yesterday it rained again enough to flood out our street and caused lots of flooding and damage to the area. My Dad lives out by the lake in the house where I grew up. He told me that the lake was the highest he had ever seen it in 35 years. Field Trip!

Our goal was to go back to the bluffs where I took this photo on Christmas Day a few months ago. 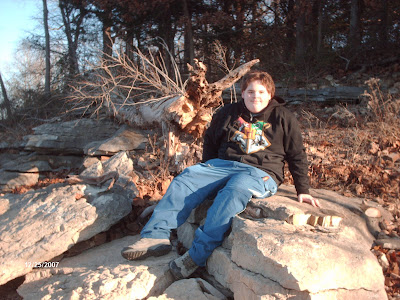 Those bluffs The Bean is sitting on are up this road. Past that water. Water I wasn't driving though. Not me. Those bluffs are now at least 40 feet into the water and at least 30 feet under water. 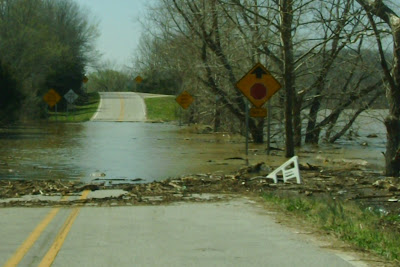 So, we went to the Swimming Area. 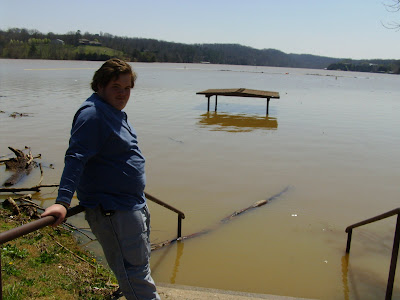 It's about 100 yards out there in the lake. There's a picnic table and a BBQ grill under that roof. You can't see it? Me neither. Those steps lead down to about six steps, then you walk past roof, down about ten more steps then you cross the sandy beachy area to get to the swimming area. Gone, baby, gone. 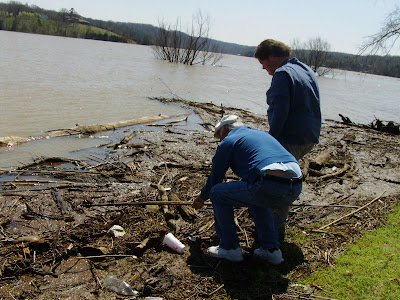 Oh the junk was in high supply today. Lots of pure junk and some treasures were floating in the lake and clogged up towards shore. Here you see The Bean and my Dad using two long pieces of cane chopstickstyle to snag an amber glass jar that was stuck in the muck. The water under that muck was about three feet deep, so we were being cautious. They got the jar. It was an amber glass Coffemate jar. Not an antique, but not new by any stretch. That junkin' just runs in the family. 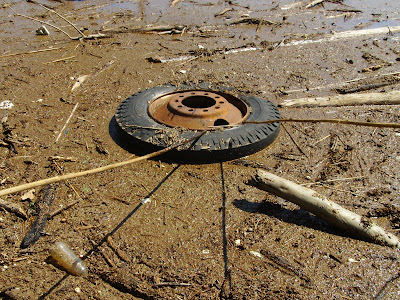 This huge tire complete with huge metal rim had floated to the surface. This is a man-made lake that was formed in the 1960's. They bought all the land and just flooded it, houses, barns and all. Stuff has been under that lake for 40 years and it's popping up everywhere. 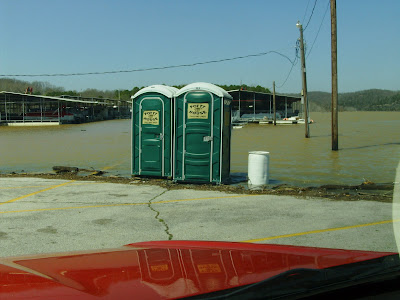 These Porta-Potty's are down by the Marina and are about to float away themselves. 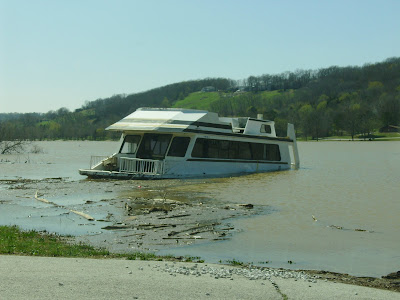 Once upon a time, this was a fancy houseboat. It broke lose from who knows where and floated up about a year ago or so. Now it has a hole in it and it is going down with the weight of the water flooding inside. It's pretty sad - you can look right in and see the mirrors over the bar and the captain's chairs. You would think somebody where would have figured out their boat ws missing by now! (You can see my Dad's house up on that ridge). 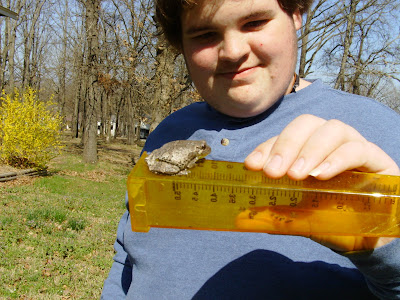 After the lake visit, we went to get some cuttings of some plants to take home. My Dad found this silly little frog hiding under his BBQ grill. The Bean got quite a kick out of him. 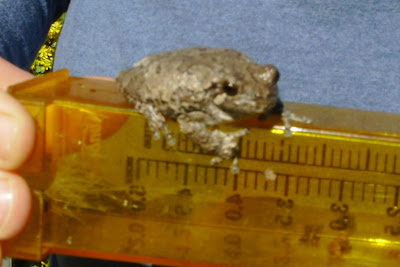 Seconds after I took this photo, I took one step backwards at the precise second that &^%$ frog squirted a giant pee right towards me. He missed. The Bean laughed very, very hard over that one.
~~~~~~~~

On the way home we passed right by a Thrift Store. What a co-inky-dink! Okay, so I went home a very specific way so we would have to drive right by it. It's the thrfit where I have never bought anything because thier prices are too high. But, then last year, I found the MacKenzie Childs dishes for $20.00 that I sold for $400.00. So, when I am near - I stop just hoping for another good score. I lucked out again today for something for me.

I have been on a vintage cupcake pick quest lately. Everyone in Blogland keeps finding them. I want some too! Today was my day! 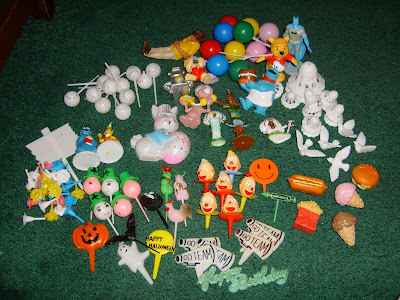 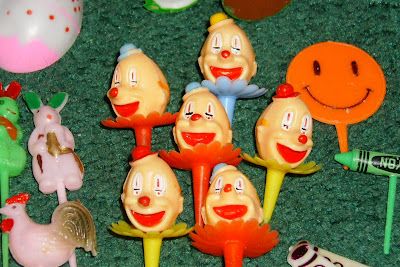 Funny vintage clown heads, a rooster and two bunny cupcake picks. Seriously - how cute are they? 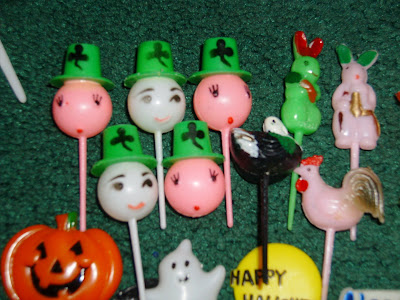 Some funny St. Patrick's Day head and those bunnies and that rooster again. 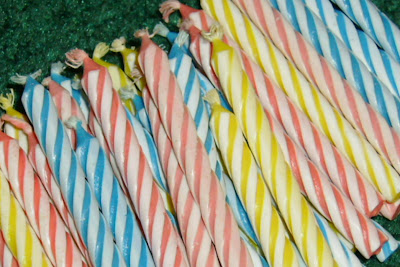 I started to throw these candles out, but I think they are vintage as they are made thicker and heavier than the ones like it you can buy today. So, in the keep bag they went.

Doesn't everything usually go in the keep bag?

More rain coming on Wednesday. And Thursday. Did I mention Friday? Ho hum.