Well, we made it through all day Sunday without anything getting broken. Yea for us. I kept DH in the driveway assembling shelves with the help of The Bean. They did a very good job. Thank heavens The Bean knows you should read instructions and follow them precisely. His Daddy never has been a direction follower, therefore, nothing is ever assembled correctly. When we were first married we bought a lot of that furniture in the box that we had to put together. I had put an entire Entertainment Center together alone and knew it needed to be done correctly the first time because once it was together, that thing ws solid and did not come apart. DH thought you could just randomly assemble it. When he was "finished" he would have a random pile of bits and bobs, screws, nuts and glue left. "Extras" he called it. Uh, I don't think those are "extras" since the top is leaning to the left and the bottom is leaning to the right.

The shelves went in the garage and are for my Christmas and other holiday decorations. It is really insane that I have nearly 30 Rubbermaid totes full of holiday items. Inside and outside stuff. Things I only see a few weeks apiece each year. But, would I get rid of any of them?? Uh, NO! I keep thinking that the "Clean Sweep" dude would be having a fit about my Stuff. "It's all too much". But, it is organized and shelved and I have a place for it (insert thumbs in ears and begin wagging), "So, Pbthhhhhhh..." (And I did donate another entire pickup load full this weekend to boot).

The Bean has his Homeschool testing next Monday. These are the same tests that they take at school, but so much more relaxed. At school they preapre them for weeks and weeks and then they begin practice tests for weeks. Then they have the actual tests. But, once the tests are over, it's pretty much party time until the end of the year. For homeschoolers, it is two 45 minute tests - Reading Comprehension and Math. And on the Math you can use a calculator. They say it is because homeschoolers learn things like they will use them in the real world. Yes, you need to know the fundamentals to work out a Math problem, but when you "grow up"you will most likely use a calculator to get those answers. He's taken these tests at school and done extremely well, so No Worries. Yet, anyway.

The Happy Mail fairies have been smiling down at me recently. Friday this package of goodies arrived from Helen. Helen found my blog through RefundCents last year. 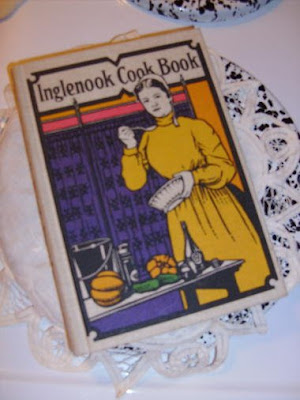 Since that time, Helen lost everything she and her family owned in a horrible house fire. She is a great lover of vintage things, thrift stores and bargains, so losing her possessions was hard for her, but she was also thankful to be alive. I sent her some goodies not long ago after she commented that some cereal bowls I had were similar to those she lost in the fire. And, even though I wanted nothing in return, she sent me some lovely items including this wonderful old cookbook, another cookbook with some good Vegetarian recipes and a sweet doiley. She also made me some wonderful return adres lables with monkeys and hearts on them. Watch for them when you get Happy Mail from me! 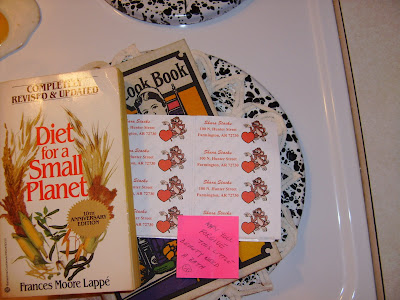 Today another sweet surprise came from Sveltestuff Sue. The Bean went to get the mail and came running in saying, "Who do we know in New York??" 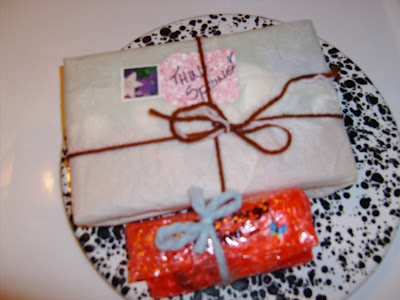 Lucky for him, Sue remembered him and sent him some keychains for his evergrowing collection. As for my goodies from Sue..lookee, lookee, lookee! 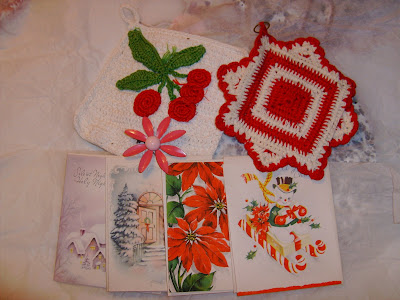 Two wonderful vintage potholders in loverly red and white. Check out the cherries on the square one. Love it! And a pink pin which she referred to as Pepto Pink. My fave! She also included some fabulous Vintage Christmas Cards for my collection. Sue has been very giving lately as she also sent Heidi some similar goodies. Thank you Sue. You made my day after a particulary crummy weekend. ;o)

Here's to a better week for us all!