I find myself at home alone today. And, it feels odd! The Bean is at the Education Co-Op taking the Ohio State Basic Exams. They last from 9:00-11:15, but have many breaks, four, I think, so the actual tests are not much time at all. Two 25 minute reading tests and a 25 minute Math test. I was pleased to see that all the kids and parents looked pretty much like us - regular people. Some I even recognized some people from Wal-Mart and around town. Sometimes the term "Homeschooler" puts a certain image in your head. I don't mean this bad. I was just pleased to see that none of the kids looked different than the others. The teacher that was administering the tests turned out to be one of my high school teachers from *cough* 25 *cough* years ago from 20 miles away. Very, very small world. 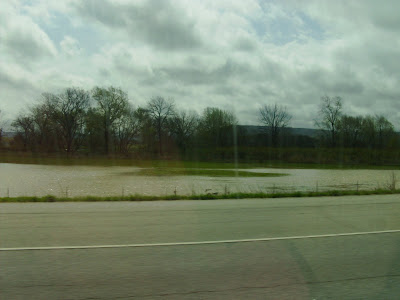 The weather has continued to be weird-O around here. Last week we had more massive amounts of rain. This picture is a pasture near the river, that is now a river itself. Normally you cannot even really see the river from the bridge as you drive over it. 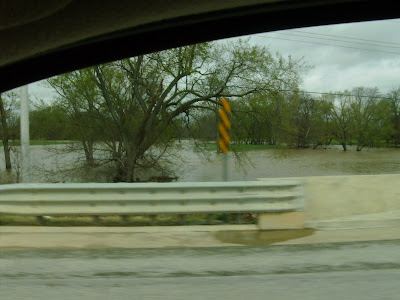 Here's that bridge - water, water everywhere. There are houses and businesses under water, not here, but very near here. It is such a mess. And more rain coming Thursday and Friday. Last Wednesday night, it got really hairy down in the River Valley, but the weatherman said it would remain calm up here - just lots of rain. Well, it was calm at my house, but at about 5:00 a.m. my Mom was in bed and the power had gone out so she could here everything. She said she heard what she knew was a tornado coming, but barely had time to react to it before she could hear it pass. We are from Kansas, so we know the sound of a tornado when we hear it. Thankfully (that is an understatement) she and my stepfather and all their critters as well as their house was unscathed. They did lose a few trees. But, the houses not more than two miles up the road were flattened. Trees uprooted, cars beat up with golf ball sized hail. In the River Valley they had softball sized hail that broke holes in all the windows, holes in the siding on homes and completely broke out the windows in cars. No one was hurt, so it is a very good thing. We were watching the local wether and they had to abandon the studio and take cover and, I tell you, that was a pretty scary thing to listen to as their mikes were still on and people were ducking and running. They were okay too. It was just scary to listen to it all.

This morning it was 25 degrees so everyone had to cover up all their sensitive plants. On the way to the testing area, it looked like Halloween - ghosts everywhere! People use pillowcases, sheets, Wal-Mart sacks (which are the wrong material to use) and buckets to cover things so it looks very odd in the yards. We covered up our scared Clematis which we love so much. The Forsythia and Lilac are strong enough to make it. Wednesday it is supposed to be 85 degrees. It is just nutso.

I still have an hour to kill before I am Beaned again. We are off to WalMart to get a movie out of the Redbox which is the bestinvention of this century. And, I say that with confidence, knowing their is still 92 years left in this century.

$1.00 a night DVD rentals, no late fees, no people to hassle you, no extra charges. Just the DVD you want when you want it. Absolutely fabulous! We have seen six New Releases in the past two weeks. We normally see about one a month. We've seen "Enchanted" "Dan in Real Life", "Martian Child", "Waterhorse" and "I am Legend." Am I the only one that didn't know whaht "I am Legend" was about? I knew he was the only one left in NYC and he was trying to survive. But, that is all I knew. Holy Crap if you haven't seen that movie and you don't like scary movies, do not watch it. I was terrified. I still am! And, I am still sort of scared of the dark! Yikes!
Posted by Shara at 9:31 AM