Thanks for all the encouragement on The Bean's tests. He said he didn't think there was anything on it that he didn't know how to do, so I am relieved. All the parent were giving their kids the third degree about if they had covered it all and if they thought they did well. It's not just the kids that were tested. The parents were tested by proxy. If the kid fails, the parent has failed. It was also nice for The Bean to see that he isn't the only kid in North America being schooled with his Momma. The results will come in the mail for our eyes only and for statistics only. I know he will do okay, I am just happy that the %#*& school won't automatically know his scores. Since that was their big "fear" about having him return to school. I hope they are through the roof and I will take them next year and do the proverbial "Nanner-nanner-boo- boo" at them.

Today we went to two yard sales, dug in some people's trash (!) and went to the thrift. All with me sans makeup which is something that I just do not do. Ever. But, today I ventured out and ended up going into the thrift ala natural. My Mom says I have officially "hit bottom." Thanks, Mom.

Here's the loot from today and a couple things from the thrift on Wednesday. 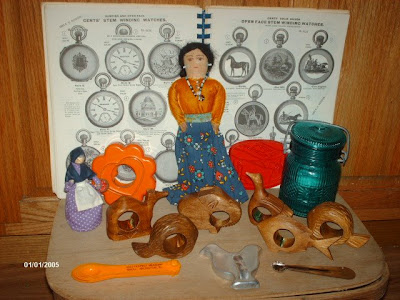 That book in the back is a watch repair book with all the original ads and information about pocket watches. I thought it would make good crafting fodder in collages and the like. In the center is a neat old Indian Doll that was destined to go to my Mom until she said I had hit bottom. Kidding, It's still hers. There's an assortment of wooden napkin rings, a Pampered Chef Whatzit (Grapefruit tool, melon baller? I dunno, I just buy anythig Papmered Chef when it's 5¢), set of vintage avertising measuring spoons and a set of Tupperware Cookie Cutters - 10 cutters in one (I already have one of these that I use all the time, so this is destined for a Swap or "Just Because" mailing). The old blue jar isn't actually as old as I originally thought - it is marked "Avon"on the bottom. I still think it's a neat jar. And, I scored it out of the TRASH. More about that below. The little doll on the left has a head made of a hickory nut and her basket is an acorn top. It is just too cute. (I am using my old camera so the photos aren't too great and I can't zoooooooom in on anything). 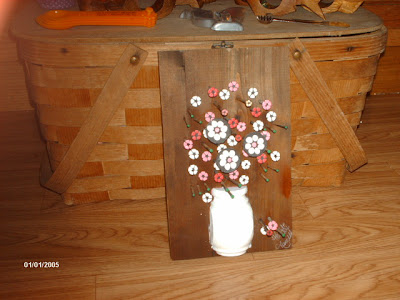 I have another one of these pieces of art somewhere in my ebay stash. Now that I have two, I suspect I have another collection in the making. And being the Junkreator, it is right up my alley. The flower pot is a piece of porch railing. And the flowers, what are those? Can you make them out? 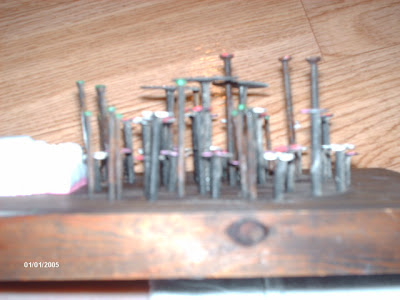 Nails of all sizes - long, short, skinny, fat. Hammered in at different levels then painted to look like flowers. Junk! Clever Junk!

This vintage wooden puzzle was my favorite find today. It was only 25¢ and just too sweet. The clock hands are broken off, but the graphics are just too cute. 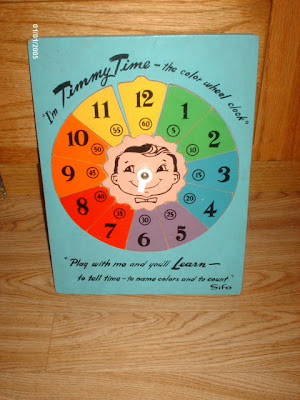 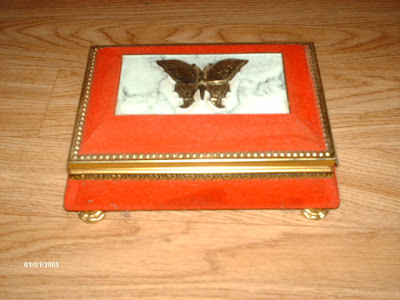 This tin is marked Western Germany on the bottom. It is all tin, but has a red flocked velvety surface. The center of the top looks like marble with the gold butterfly in the center. It was pretty dusty when I found, it, but it cleaned up pretty well. I love W. Germany tins. They are so elaborate. This was only 65¢! 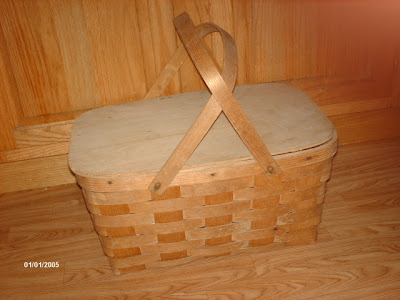 The picnic basket (another?) was $5.00 and everything else cost a total of $3.40. Except the jar was free. Which brings me to the jar. And the digging in the trash stuff. We were in the town where I got this junk last year. Ever since last year I have been looking forward to this weekend with great anticiaption. Annual Clean Up. If you don't want it, put it by the curb and the city will pick it up. If there's anything left! Some people throw absolute crap out in big heaps- matresses, sticks, lumber, broken TV's, etc. and nothing looks like a treasure. Then there are the people that lay it out like a department store just hoping someone will take things. I spotted such a line up by the curb today. Everything looked to be in clean and good condition, but the jar was all I decided to take. This weekend, gues where I will be? Junkin' curbside. Oh, yeah.