I've been working all week trying to save my photos from this old dinosaur computer so that I can finally open my brand new fancy computer that has been sitting in the garage for THREE weeks. Lots of my photos are saved on discs, others are on this blog and now I am trying to save the rest onto another private blog, just so I still have access to them. Lots of my photos are being deleted.

While going through the photos, I have been going through a lot of memories too.
Here's a photo of the first house that DH and I shared together. We moved into it in February and got married in May of that same year. Oh, my Dad was not a happy camper about that situation. But, a terrible bad thing had occurred in my apartment building and I had to move. Not in May after the wedding, but then. That minute. We found this little house and we moved in together. Not that it was or is anyone's business, but because we were such traditional folks. We pretty much lived there platonically until the wedding. I had to get out of my apartment and I couldn't afford the house on my own, so we shared it. We were friends before we got married and lived that way until the wedding. 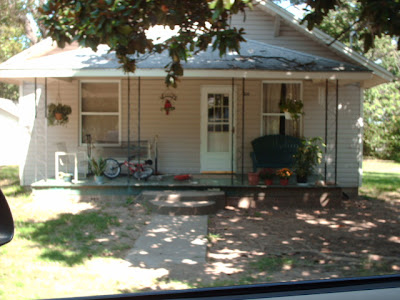 This photo was taken on a drive by there about two years ago. Not when we lived there. I had plants on the porch and a sweet porch swing off to the right of the door. One day I had a particularly "Day from Hell" with the evil witch that I worked with and when I went home, I cracked open a wine cooler and we went out to sit on the porch. Hubby and I were on the swing, and my Mom was sitting on a chair in front of us. While we were in mid swing, I saw her mouth open in slow motion and say, "Nooooooooooooooooooo" while her line of vision went down, but her eyes stayed at my eye level. I found it all very odd and couldn't figure out how she could look me in the ye, but her eyes were going down. And then, WHAM, I felt a crack on the top of my head and everything just sort of went wonky for a minute. Suddenly she was on her feet, DH was on his feet and I was on my feet.

The big wooden house beam that the swing was attached to had come down and brought with it the swing, me and DH. The beam was nailed up and not screwed, so everytime we had sat on it, those nails were slowly working their way out. DH seemed fine and I assured them I was fine, but then a big thick oozy trickle of blood snaked it's way down my forehead. To say that DH panicked would be a slight understatement. He wanted me to go to the hospital immediately. I agreed, however, I wanted my purse and my shoes, because I was barefoot. The being barefoot part is important because when he went in to grab my purse and my shoes, I asked for some socks, because I hate to wear shoes without socks. In fact, I am rarely ever barefoot. I always have on my socks. For some reason, this request of something so unimportant as socks, really got to him. He went a little nuts yelling at me "Socks! Socks? Socks?! You don't need socks!!!" and telling me he would not get me socks and I was going to die due to loss of blood right there on the porch while he got me socks and yadda yadda socks this and socks that. I mentioned to him that he could have gotten the socks by then and had me half way to the hospital, but he didn't care. "No socks for YOU!" Just like the Soup Nazi. I think my Mom must have grabbed my socks when she got her purse, because I know I had socks on in the Emergency Room because they made me take my shoes off. I only ended up getting two stitches on the top of my head and my drowsy fall-asleep-at-the-drop-of-a-hat husband was put in charge of watching me to make sure I didn't have a concussion. (Thankfully my Mom stuck around to watch me.) When we got home, we looked at the board lying there and realized that the eight inch long nail had really only missed impaling me in the head by a few inches.

So, if I have this sort of memory and story to tell after I look at each and every photo, you can see that this is going to be a very long process. Bear with me. You're just lucky the Birth of The Bean isn't on here or we'd all be a boohoo'ing and reminiscing!

Which reminds me of another story!

But, I'll keep this one short. When I finally went into labor after a week of patossin and other inducing drugs, I went fast. Within an hour I was not ready to I was having the baby right now. It happened so fast that I wasn't able to have my Epidural. After we were released from the hospital, I received a rebate check for $300.00 for the cost of the Epidural that I had prepaid. I'm all for saving money, but come on. I really could have used that Epidural. We bought a new TV with it. DH said he enjoyed the new TV more than he ever would have enjoyed the Epidural. Oh, he's a funny one, that Sock Nazi.

*For those of you that asked. The Very Bad Awful Thing that happened at my apartment was truly horrifying. I won't go into details, because it still traumatizes me to this day. I will say that my neighbor, through some very strange and deviant activities managed to kill himself and no one found his body for twelve days. As you might imagine, living in my apartment was not an easy thing to do during that time due to certain smells and such. And, once we found out what had happened and why it was like that, no one could stay. It was an absolute nightmare. I can't believe I just blogged about it. Erase it all from your memory.