Yesterday morning, we had all the school stuff laid out with our schedule all planned out. But, suddenly it dawned on me that it was an absolutely stellar day outside. The temperature was about 65, the sun was shining in the bluest clearest sky I have ever seen, the hawks were out riding wind gusts and the trees were just starting to get hints of color and, well, homeschool could wait, I decided. Thee will be months of cold dreary wet weather coming, so we need to enjoy what we have while we have it. Life lessons were waiting!

I threw together a couple of PB&J's, some bottled water and off we went. We drove out into the next neighboring town. This is the home of the Super Cheap Thrift Store. And, I'm not sure if I have mentioned this before, but the SCTS is located directly across the street from a Civil War Battlefield. (Surely, I have mentioned that...) Anyway, I digress. It is where we go when we should be doing something educational, but really just want to be outside enjoying life.

We ate our picnic lunch and then went on the one mile loop Historical Tour. We learned about cannons, the battlefield, civilian life and so on. The walk is beautiful and peaceful. I love fall because not only are the trees turning colors,t but they have added surprises - hickory nuts, walnuts, hedgeballs, catalpa beans and other oddities. We love to look at each tree. 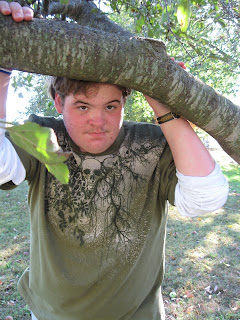 If there is one thing that I know it is this - as a Mother I have taught my son to appreciate his surroundings. He grabs the moment and enjoys it for whatever it is worth. He doesn't need Playstation (but he does like Playstation!) to have fun. He knows that there are things to do and see right here in our very own backyard and to enjoy it when you can. 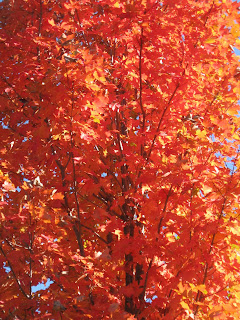 After our tour, we drove over to a different parking lot because I could see a tree in the distance that I wanted to take a photo of on the way out. The one and only brilliant orange tree in the entire park. 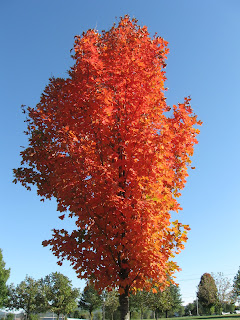 In order to get to this tree, we had to go down a road within the park that I had never been or or even knew existed. Down the road we passed a sign that said, "Apple Orchard." There were about 100 or so apple trees in three different varieties. They were loaded with fruit. Then I noticed people on ladders picking apples. I commented that I had absolutely no idea that there was an Apple Orchard in the Battlefield (we go there about once a week and have done so for years and years....). I wished aloud that we could buy some apples. 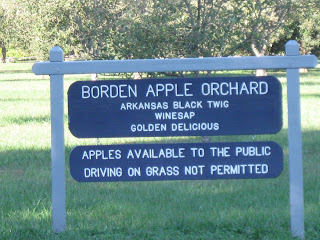 That's when I read the rest of the sign, "Apples are available to the public." FREE APPLES? FREE APPLES! We parked the car and grabbed two of the many tote bags that I carry with me for yard saling and headed to the orchard. I still wasn't sure that this was legal. Free apples for the taking and picking? I asked an older gentleman if it was true that you could have apples and he said, "You can have all you want! I've been coming here for years!" 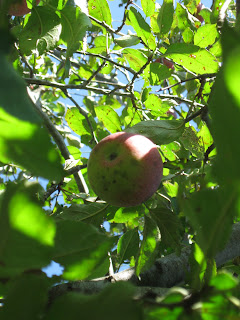 He had one of those tree pruning things with the rope on it lying on the ground beside him. He offered to let me use it, and I gratefully accepted. I stuck it high into the tree and tried to pluck one solitary apple. He said, "Grab the branch and shake the heck out of it." So, I did. Boom boom, boom, the apples started to fall. 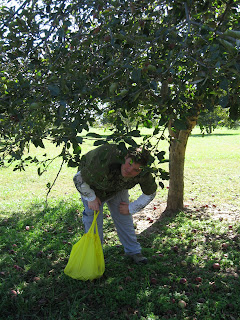 We couldn't figure out which apples had fallen and which ones were on the ground already, so we took turns shaking and spotting and then grabbing the apples. 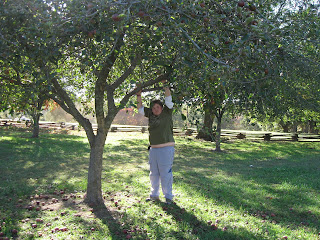 Before we knew it we had two huge bags full. When we left the orchard, The Bean said, "This was the best day, ever." I love that kid. 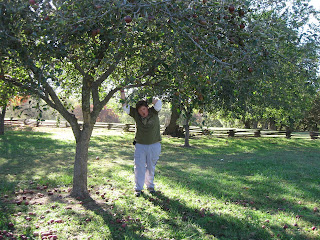 As I was going through the photos on the camera last night, I nearly deleted this one as it looks very similar to the one above it. I zoomed in on it and am I ever glad I did - look at The Bean. He shook an apple down right on top of his, well, bean! Right after that he was rubbing his head telling me an apple fell on it. I had no idea I had captured it! Too funny. 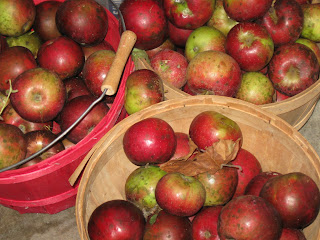 Today we made apple pies. I've made apple pies before in various stages - frozen crusts with canned filling, frozen crusts with fresh apples and scratch pastry with canned filling, but never fresh apples (THAT I PICKED) and fresh scratch pastry. I must say, it isn't he most attractive pie, but it smells like heaven and I know it will taste good no matter how it tastes! I used my new Kitchen-Aid Mixer (that i scored on clearance for $54.00 a few weeks ago) to make the dough, made the filling and the crust, so I think it was just too many new things at once to make a purdy pie.