A few weeks ago our family tried to go on an adventure to find a little one lane open bridge that is rumored to be haunted*. The bridge is open on the sides with nothing to prevent you from driving right off the sides into the river. The day we tried to go, just happened to be the day after Hurricane Ike had roared through our city, unbeknownst to my sleeping family. Zzzzzzzzzzzzzzzz we slept away as the wind howled and the rain fell along with trees in the neighborhood. The next morning, we rose from our slumber, jumped in the car and headed off in search of this bridge - the Tilly Willy Bridge. But, it was flooded out and under water because of the torrential wind and rain that we had no clue had happened the night before. Zzzzzzzzzzz. We got partway to the bridge, but had to come back home because of the flooding.
So, today we rescheduled adventure. This time we made it to the bridge. It was a bit uneasy driving over it and not even being able to see the sides on each side of the car. The water was low this trip, but I still didn't want to go over! 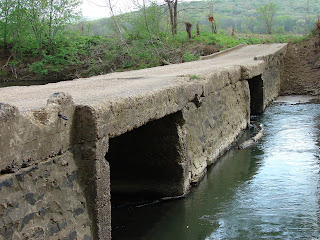 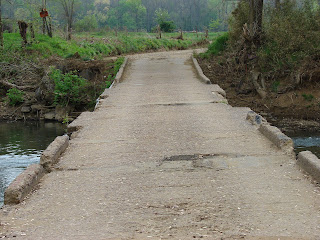 After we crossed the bridge, we drove for seven miles on a dirt road looking for a lake that we had recently read about. I honestly did not know that there were still that many dirt roads in our area! When we did find the lake, we were thrilled to be the only ones there. We parked the car, walked the edges of the water, throwing stones, looking at frogs and cutting branches from the various types of trees. This was a family adventure day, but it was also a field trip day. We cut branches from every different type of tree that we could find, a lot of weeds, flowers, acorns, hickory nuts, persimmons, mussel shells and five different types of mushrooms. We didn't pick the mushrooms - we took photos for reference. Tomorrow we are going to look each thing up in our nature book and document it. So, see, it was educational!

As we were walking along the water, we heard a car driving up the dam. I got a little worried because we were the only ones out there and we were, quite literally, in the middle of nowhere. But, then I saw the car and it was a Sheriff's Deputy making his rounds. He stopped an visited with us for quite awhile, wished us a good day and then he left. So, we had a good feeling about being safe out there. We drove on to the other side of the lake, ate our picnic lunch and walked the nature trail. It was a gorgeous day with temperatures in the low 70's all day. The hills full of trees have a slight touch of orange and yellow to them. I normally am not an outside, hiking, walking on the edge of the lake kinda gal. But, when Fall arrives, I am outside a lot. I cannot get enough of the cool temperatures, the blue water, the clear sky, the changing leaves and all things Fall.
*The Legend of Tilly Willy Bridge: It's said that two fatal and tragic events took place on this treacherously narrow and decrepit structure. One story tells of a family, consisting of a husband, wife and new baby traveling home one dark late night. The baby was in the backseat began to fuss. Not wanting to awaken his sleeping wife, the husband turned to comfort the child, only to end up running their car off of the bridge. All three perished in the dark waters below.
The other is a similar tale of a woman losing control of her vehicle and as the last family did, plunged herself and her young son to their own untimely and watery deaths.
It is now said that there are several paranormal events which occur there. One is the sighting of a woman in a white dress dancing and twirling in the fields near the bridge, and reports of a green goblin-like creature skulking about by the water's edge. Sometimes a "ghost car" is seen crossing the bridge.
It's said that if you stop your car on the bridge and put it in neutral that your car will be pushed by unseen hands to safety and when you get out to investigate you'll find your rear window steamed up as if by the labored breath of your rescuers. Oddest of all are the hand prints, both adult and child-size, that are imprinted in the steam. (From Ghost Geeks. com)
I will say that after we came off the bride, we had a hand print on the back of our car, but I thought it must have been there before the dust from the dirt roads settled on it. But now, I 'm not so sure!
Posted by Shara at 9:10 PM