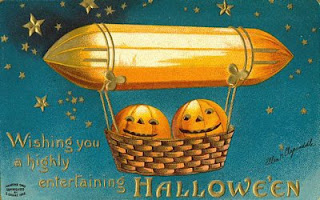 Boo! Happy Halloween. I still love Halloween, even though Halloween doesn't mean much at our house now that The Bean is beyond Trick or Treating. I still love my decorations, making goody bags for the kids and seeing the costumes when the kids knock on the door. This year if you trick or treat at our house, you will get a Trick or Treat sack full of spiders, rats, bats, skeletons, some candy and a black and orange pinwheel to amuse yourself. All bought after Halloween last year (except the candy - I'm not that cheap!) in true thrifty fashion.
Even when The Bean did go Trick or Treating, he never would say "Trick or Treat." He never did (or does, for that matter) speak to anyone he didn't know, so speaking to strangers isn't something that he would do. But, he would run fast to the door, knock and hold out his pail for goodies. Thankfully, he was one adorable kid with cute costumes, so people dolled it out after Mom, Dad, and Grandparents all yelled, "TRICK OR TREAT" for him. There was one mean old dude who said, "If you don't say Trick or Treat yourself, you don't get no candy" and proceeded to slam the door in his face. I should have egged his house. One year we took him over to the schamncy side of town to go to a few houses. We knew a few people in the area so we wanted to go to the houses that we knew and hit a couple neighbors too. At our first house, this very old, very cranky man was apparently overwhelmed by the rows of children knocking at his door, ripped the door open after The Bean knocked, looked down at my three year old Bean and said, "What's your address kid? If you don't live near here - NO CANDY FOR YOU!" Candy Nazi, ala Seinfeld episode. It made me mad and struck me funny at the same time, so we just left.

When The Bean was two, he was a clown. I applied clown face make-up on him, threw him in his car seat, took him to a party, Trick or Treating at Sonic, trick or treating to a few houses and then out to the retirement home for some more trick or treating. Everything a good Mom does except one thing - I failed to let the kid look at himself in the mirror. He got a glimpse of himself in a mirror at the retirement home and literally freaked out screaming in fear. He was a clown, for heavens sake, not a zombie or something scary. So, I learned a lesson, always let the kid look in the mirror!

When he was three he was a pirate complete with a moustache. Very comical and still very shy. But,s till awesomely cute and he scored a pumpkin pail full of treats.

The next year, he had just turned four and had a better grasp of the door knocking and getting treats thing. He still wouldn't say Trick or Treat, so I made him a sign and pinned it to him that said, "Trick or Treat, I'm shy". People loved that one. He was a cowboy with fringed pants, real boots, metal spurs, a suede fringed vest, real cowboy hat, rope and a horse to carry - an outfit I had pieced together throughout the summer. He was the cutest cowboy, I swear. People were really generous to him that year and he wanted to go to a lot of houses. He just kept going and going. After we had hit a bunch of houses, he suddenly sat down in one yard and pulled off his boots and socks, threw them aside and ran off for the next house. I found that odd, then I saw that his socks were wet and his boots were wet. The kid had peed himself and not even realized it he was so intent on candy, candy, candy. (That's a story he just loves to hear now!).

The next year, age five, it was the Halloween after September 11th. He wanted to a fireman. I put him in a yellow rainslicker, a fireman hat and he carried a plastic axe and a flag. People literally were choked up with tears while practically pouring their entire bowls of candy into his bag.

After that, age six, he was Matt Medic from the Rescue Heroes which was real hospital scrubs and a real lab jacket scored at the hospital thrift store along with a real working stethoscope from a yard sale. That year, he went to a few house, proclaimed, "I'm done" and he never went trick or treating again. Retired from Trick or Treating at the grand old age of six years old. He decided it was more fun to hand out candy at home and have Mom take him the day after Halloween and buy him giant bags of Butterfingers for half price. That's my boy.
This year he has decied to color his hair "You Won't Get Shot in the Deer Woods Orange" in honor of the holiday. Lord knows if it will ever wash out. Tomorrow we go meet Jack Hanna and see his show. I hope The Bean no longer has orange hair for the photos.
Did anyone see Regis and Kelly this morning? I love their Halloween shows. When Regis came out as Gordon Ramsey from Hell's Kitchen, he would talk but theywould "BLEEP" him like he was cursing. He told Emeril "Enough with the BLEEP'ing Bam." And he told Mario Botelli to get some "real BLEEPIN shoes". For some reason, hearing Regis get BLEEPED, was the funniest thing I have seen in a long time and I nearly peed my pants watching it. You might have had to have been there, but, to me, it was extremely funny.
Happy Halloween!
Posted by Shara at 8:11 AM