I went out Sunday evening (During a bout of stomach ick) and decorated the porch and yard. Wham, bam, thank you Ma'm, fast. 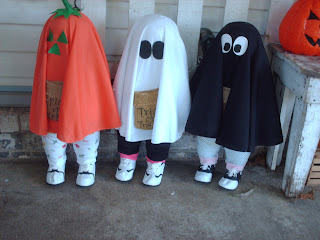 These three little guys line up outside my door every year - they are really kid sized and I think they are too cute. My Mom bought them for me about ten years ago and they will always be lined up trick or treating on my porch. 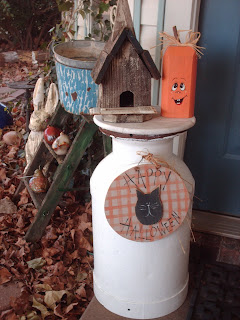 Some Halloween junk mixed in with my regular junk. I normally pull the regular junk for holiday decorating so that it doesn't look, well, too junky. But, this year, it's all out there...junk, junk, junk. 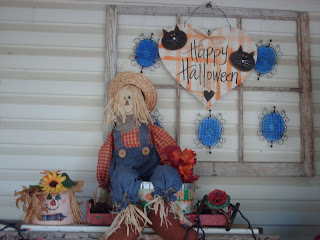 The scarecrow head is a craft of yesteryear when I used to craft constantly to enter things in the County Fair. 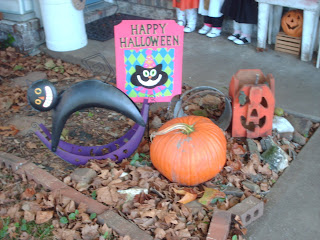 The pink sign was my one and only after Halloween purchase last year. I showed restraint! I've have the big black rocking folk art cat a long time, but I never put him out because he's too big for inside the house. I had a brainstorm Sunday - I put him outside! 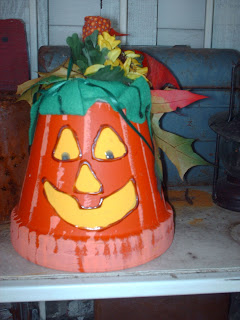 Another doofy craft for years ago. I still think he's funny, even though he isn't like the things I like to make and decorate with now. 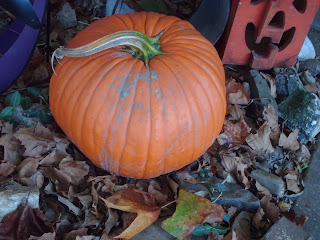 A big fat pumpkin with a jaunty stem on his round head. I love a juanty pumpkin! 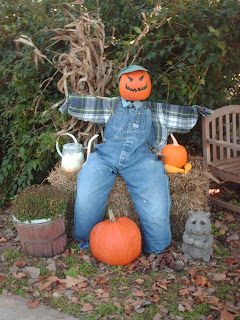 Official Fall Display. I will have to make him a regular scarecrow head after Halloween so he is more Fall'ish and not so Halloween'ish. 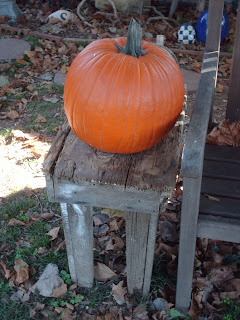 Another fat pumpkin on one of my favorite side tables by the park bench. I found two of these side tables at a yard sale years and years ago. I asked if they were for sale because they had things on them for the sale. The old man said he had made them forty years ago (he said it like they were junk because he had made them so long ago, but I knew they were awesome!) and I could have them for $1.00 each. The other one has chippy white legs and a reddish colored top - it stays in the house to protect it from the elements. 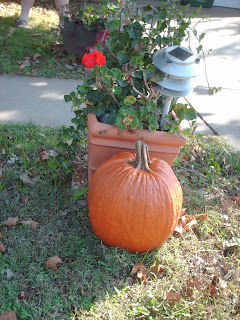 Planters and a pumpkin on either side of the driveway. I keep expecting to find them smashed in the street one day, but so far the hoodlums have stayed away. *We have no hoodlums.*

Tomorrow we are going back to the freebie Apple Orchard. We've had time to taste the apples we brought home last week and found our favorite. So, it is back to shakin' the trees to get the good ones. And, my ugly pie? It was delicious! I think the trick was the KitchenAid mixer - no handling and overworking the dough. The dough hook did it to perfection.

Miss Heidi asked how I managed to score a KitchenAid mixer for $54.00. I spotted it on the markdown aisle at Wal-Mart, but it wasn't priced. It looked out of place and it was a different color - sort of a gunmetal gray. Not like any of the other KitchenAid mixers in the store. I hauled it to the scanner (not an easy feat-that thing is heavy) and it scanned at $54.00. Sold! I had a $100.00 gift card from our Anniversary that I had been rat holing since May. My procrastination paid off! I think the mixer might have been a very nice wedding gift to a very unappreciative young married couple - they didn't want it, returned it to Walmart for some random price that someone pulled out of their hat and then it had to be sold. A few days later, at the other Wal-Mart across town, I happened on a beautiful set of Farberware pots and pans marked down for $125.00 to $44.00, so I used the balance of the gift card to pay for that. After 17 years of marriage, we were due some shiny new pots and pans. So, my $100.00 gift netted me about $325.00 worth of merchandise. (Thanks Mumsie!)