I SPY with my little eye

Wednesday is the Breadman's day off, so it is Family Day. We try to do something Educational one week, something not so Educational the next (movie, Target bargain hunting, etc.) Last week we went out and took photos of trees, mushrooms, plant life and flowers then identified them all using books that I have picked up at the thrifts. Only I could have a book entitled, "How to Identify Mushrooms and Fungi" (complete with a 15¢ price tag) in our library. The Breadman had the fabulous idea to pick one of each and bring it home for further study, but I over rode that idea. Lucky for us, because out of the seven different types of mushrooms we found, all but one turned out to be poisonous. That's why I handle the homeschooling, my friends.
Today we were headed to another lake to see if the trees were starting to turn when the sky opened and the rain began to fall - hard. We made it as far as the new Walgreen's up the street before we decided to stop and give the rain a chance to subside. It did pass, but it had rained so hard and so fast that we decided the mud factor would outweigh the fun factor. So, when you can't do something educational, what to do, what to do?
Well, you go thrifting, right? I had three totes full of Halloween and fall decor to drop off at the thrift, so I decided I might as well have a look around.... You know how that goes. 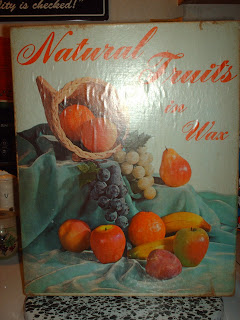 Pardon, the glare. I spotted this box for "Natural Fruits in Wax" with the price tag of $1.99 from a Department Store named Newberry's. It shows placing the wax fruit in a bowl on top of you TV for a "stunning display." Okay..... 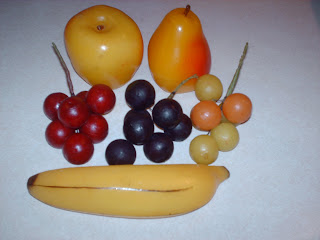 These pieces of wax fruit were in the box, still in their plastic bags - each one individually priced 19¢. There was a time, early in my ebay days, that wax fruit was highly desirable. I don't know if it still is or not. I looked around ebay, but when I typed in WAX FRUIT and got about 10,000 candles. So, I need to refine that search a bit. To say the least. The ladies quote me a price of $2.00 and I threw a big fake fit telling them it was only $1.99 originally. Luckily, they laughed. 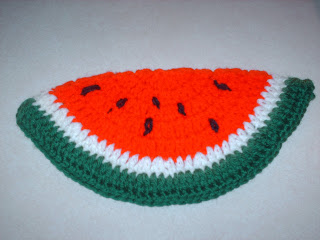 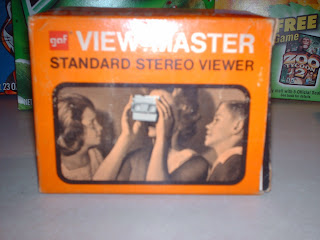 An original Viewmaster in it's original box for $2.50. No discs or wheels or whatever you call those things.. REELS! That's what they're called - Viewmaster reels. Anyway, no reels, but finding a almost new vintage Viewmaster is a pretty good find. 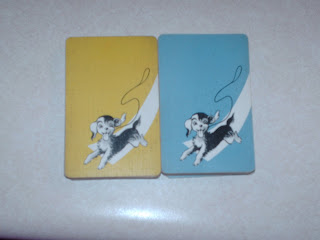 This is a set of two decks of playing cards for $1.00. They were in a Congress velvet flocked box, but the box had photos of Grecian Urns on it from a museum somewhere and these fun dog cards were in the box instead. I covet velvet flocked Congress Playing Cards, so I was sad to see the wrong cards in the box, but then I took another look at the cards and realized that they were actually much cuter than any Grecian Urns ever could have been considered. 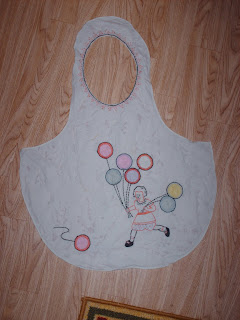 After I have looked in every section of the store, I always take a second run through. It seems that is when I generally find my best find. Today was no exception. I found this in a plastic shoebox under a bunch of crocheted potholders. Who would look in a box of crocheted potholders? (Me, watermelon lady, that's who). This is a child's apron, handmade with feedsack balloons and the cute little embroidered girl. LOVE IT. Especially for the princely sum of $1.00.

On a completely different subject. I have been spying. And I feel dirty. Let me explain, I didn't mean to spy. It just sort of happened and it went to far before I could get out.

I was on the local freebie website to see what was being offered and I spotted an odd last name by someone's listing. A name odd enough that I have only seen it and heard it one other time in my entire life. And I sorta dated a guy with that very same name twenty some years ago. So, I click on Profile just to see, so I can say, "My, what a small world" and then return to my surfing. But, suddenly I have links to blogs and My Space and Facebook and I have photos of his kids on my screen and I know his wife lost her job and photos of HIM siting on his couch watching TV. I have not spoken to this person in nearly twenty years. I should not know what his couch looks like! I should not know that he has the ugliest lamp ever on his side table. Then there's a photo of his dog lying on his BED. The guy's bed. Now I know what his bed looks like and what is on his nightstand and that there's a picture on his nightstand of his kids by the Christmas tree. And then there is a photo of their kitchen and I know how it is decorated and what his yard looks like and oh my god I am a dirty spying girl. I should NOT know what his house looks like, I should not have been able to recognize that I know where his house is or where he works or where she works or what grade the kids are in or what type of car he drives or, for goodness sake, what type of cereal they ate for breakfast that morning. Ick, ick, ick.

And I should have quit reading before I found out that they had some hard times with their kids and the law and mental disorders and money problems and needed help from a food pantry and I am all full of tears for this guy I haven't talked to in twenty years. And, now I am afraid that if and when I do see him ( I do see him around town occasionally, we just don't chat it up) I will run to him, give him a hug and a hundred dollar bill and he will look at me like I just fell off the turnip truck.

So, here's the moral of the story. Don't put all your eggs in one basket - don't connect all your online stuff because someone could be spying on you. They could have bad intentions and that is not good. Or, they could be like me and have accidentally spied on you and know they know that you have ugly wallpaper, three kids, an ATV and you drink Sprite in the can. Ick.