This afternoon our little kitty girl, Little Lady, seemed to have a seizure. She was asleep in her bed while we were watching "A Wrinkle In Time". Suddenly, I heard what I thought was her banging on the window with her paw at a bird or something. But, I couldn't see her sticking out of her bed, so I went to check on her. She was seized up and had her head back convulsing. I got her out of her bed (it's on a shelf up high so she can look out the window) and laid her on the floor in a blanket. She started drooling while she was convulsing. 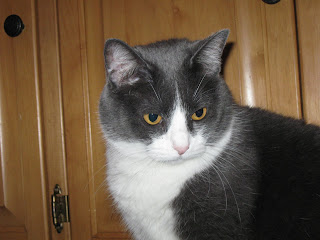 I was completely freaking out, thinking I was losing her. I begged her not to leave me and to just let it pass. After the convulsions stopped, I wrapped her up in the blanket and held her, but then she moaned to be let down. I set her down and she tumbled over to her side. I picked her back up and went to get the phone to call the vet. While I was looking up the number, she cried like she usually does when she wants down and sort of kicked off my chest. 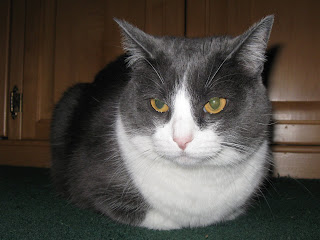 I laid her in the floor and she just popped up like her normal self. She ran to her food bowl, ate some dry food, took a nice long drink of water, walked into the living room and started playing with her toy mouse. Just like that. It was amazing. I have been staring at her for about six hours since this happened and she seems to be fine. I researched it a bit on line and it said that cats sometimes have seizures when their brain switches over in their sleep. I will be watching her like a hawk and will take her in if anything looks out of the ordinary. I don't want to blog about my cats like a crazy cat lady, but she is my sweet girl and it really upset me. The Bean handled it okay while it was happening, but completely dissolved into tears when she was back to herself. He is a very sensitive kid and loves our cats too. Hopefully, all will be well. But, I will be nervous for a long time.
~~~~~~~~~~~~~~~~~~~~~~~~~~
A few recent thrifty finds to clear the mind: 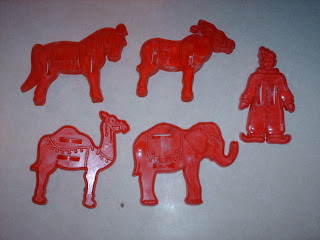 A set of circus themed cookie cutters. The plastic is a red and white mottled color and appear to be fairly old. 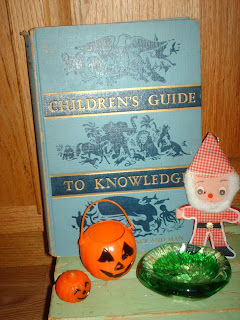 Children's Book of Knowledge from 1959 - I bought it for the great old illustrations and the pages about "Computer Brains of the Future" which describes (sort of) modern day computers and Internet. Sort of. The green glass dish isn't marked, but looks like it could or should be something. The little trick or treat pumpkin had the itty bity pumpkin candle inside it, so I grabbed them both. The funny Santa was cute for 10¢, but mostly made me giddy realizing that the Super Cheap Thrift was putting their Christmas stuff out NOW! 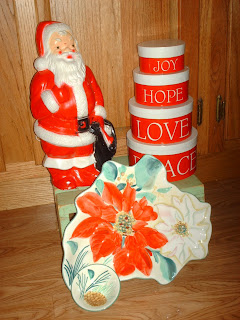 There wasn't a ton of Christmas, but since they are putting it out already, I know that must mean they have a ton to put out. This is a very old town with very old houses and lots of cool vintage trinkets being donated daily. The 1968 Empire blow mold Santa was 50¢ (yes, Sue, another one for the Army), the stacking boxes were 45¢ and the Pfaltzgraff dish set was 75¢. That is destined for resale, if it's worth it.
~~~~~~~~~~~~~~~~~~~~~~~~~~~
We picked about 50 lbs. of apples yesterday, so I am off to Google apple recipes. And check on the kitty girl. G'Nite.
Posted by Shara at 9:01 PM