Memories. I have none.

Today we cleaned out the garage. I'm always out there rearranging and organizing and donating things I no longer want or need along the way. But the day starts to draw to a close and I have to quit my work. There is one corner that never gets touched. It's in the very, very back. I thought I knew what was there - my old toy box full of Bobbsey Twin books, my Garfield collection form the 1980's, my albums (yes, I know, I need to get rid of them. But, I have so many good ones!) and DH's high school football and track crap awards. But, under that I found a couple mystery boxes. Hmmmmm..what could be in there, I thought? OH, my heavens! It was Halloween decorations from my childhood, my apartment years and our early married years in our first little house. A good lot of it went straight to the donate pile. Cheap things, Dollar store things, stuffed animals, junk in general. But! I found some treasures! A Beistle honeycomb turkey and pumpkin, Halloween die cuts from the late 1960's, and a few more goodies. I was happy to get rid of 95% of it, just to find the good 5% that I had forgotten about! 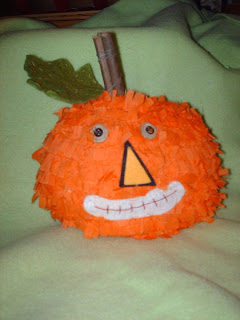 I found this guy in a box too. How could I forget him? Don't tell anyone...I have absolutely no recollection of this guy ever. Where did it come from? Did he just appear? 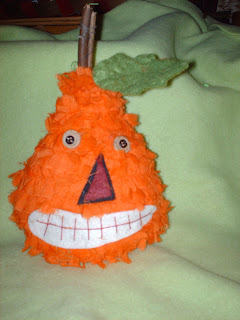 And, it gets worse! There's two! I forgot two! 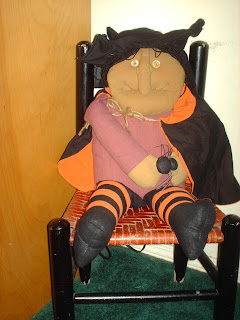 I did remember her after I saw her, but I had forgotten about her. I don't remember where I got her, though. I love her Mother of Pearl buttons and her jaunty spider. 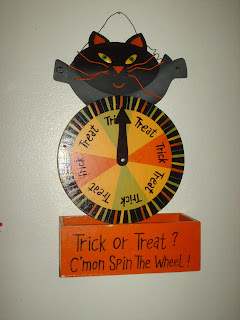 Trick or Treat? C'mon, spin the wheel! You spin the wheel and it decides if you get a trick or a treat. The box under it holds the goodies. I have no idea where this came from either. Never seen it. Nope. Nada. Not me. I can only imagine it came from an after holiday sale and I packed it away and promptly forgot about it. Either that, or I have Old Timers.
Whenever I am out thrifting or saling, I am on the lookout for cupcake picks. I adore cupcake picks. I just love to look at them. I don't think I would ever use my vintage cupcake picks on actual cupcakes for fear they would be thrown away. (That would be another plastic fork fight.***) I've been searching everywhere hoping to find some Halloween Cupcake Picks. I've looked at the thrift stores, yard sales, anywhere I look for vintage goodies. One place I never dreamt to took was in my own garage. 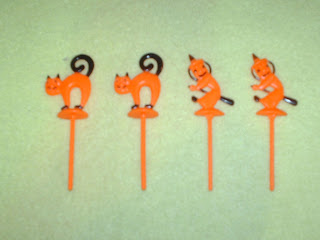 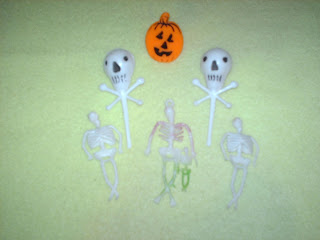 Two skull and crossbones picks, a funny pumpkin ring and a trio of skeletons. 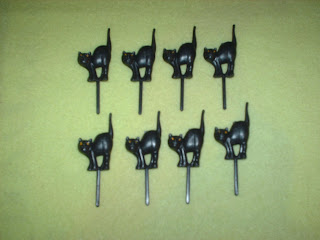 Eight black cats. (I know these are such awful photos. I didn't think to take them while the sun was still out). 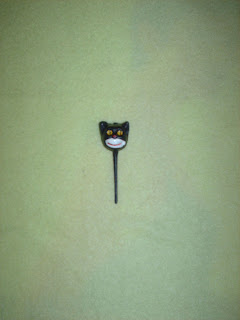 One funny black cat head. I love this one most of all. 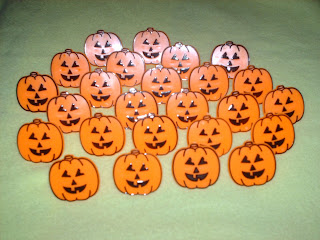 I remember buying thesepumpkin ring cupcake toppers when I was a child, packing them away and thinking, "I bet when I find these when I am in my 40's that I won't even remember them!" Okay, none of that is true. Except the whole "not remembering them" thing. I have no memories of these either. But, Mama likes!

***A few years ago, I hosted a Wedding Shower for The Bean's 4th grade teacher. I bought really nice heavy weight plastic forks at the Party Store for her shower. They were the loveliest Pepto-Bismol-ish Pink.

After the shower, I had a handful of the forks left, so I put them in the silverware drawer. One night we ate a piece of cake and used the pink plastic forks. The next day I was washing dishes and there were only two forks instead of three.

I asked The Bean what he did with his fork. He had put it in the sink with mine, he said.

I asked The Breadman what he did with his fork.

"It's disposable," he said.

"It's not disposable," I said.