Sloths and Cheetas and Bearcats, Oh My.

Today was another beautiful day. It reached nearly 77 today with beautiful clear skies. The sunlight was soaking through the bright red, yellow and orange leaves and just making a colorful glow everywhere. The Breadman went to the U of A Homecoming game while The Bean and I went to see Jack Hanna. We got there very early, in an attempt to avoid all the Football game traffic, but wound up in a mess of traffic anyway. But, with a little persistence and a good bit of circling the parking lot, we managed to find a very good parking spot near the Art Center. We picked up our tickets at the box office then proceeded to the lobby to look at the goods for sale. He has a really cool book "Passport Into The Wild" which is a great book with lots of flaps and pockets and interesting facts. We bought it as a souvenir and then they announced that Jack Hanna would be coming out to sign autographs.
We were fifth in line to meet him, so when he came out he was very jovial and friendly to everyone. A young couple in line ahead of us asked me to take their photo and they would, in return, take our photo with him. So, we switched cameras, I took one of them and they took one of us then Jack asked the next lady in line to get "one of all of us" meaning them and us, which was funny because we didn't know each other, but he assumed we were all together because we were helping each take photos. We explained it and he said, "Now, that's nice!" He signed The Bean's Book "To The Bean (okay, he wrote his actual name...)..."To The Bean - My Pal, Jack Hanna." Later as we sat waiting for the show, I looked at the books the kids in front of us were holding and they were just signed Jack Hanna. So, getting there us early netted a personalized autograph and a nice conversation. (I realize I am saying I have all these photos, but not posting them. They are on the Memory Card waiting to be copied onto a CD at Walgreen's.)

The show was very interesting. Lots of incredible animals including a Sloth, Clouded Leopard, Blue Parrot, Armadillos, Porcupines, a huge freaking snake, Madagascar Hissing Cockroaches, a baby Kangaroo, a bearcat (They smell like popcorn), Cheetah, an Arctic Fox and many others. In true Jack Hanna fashion, the show ran over 35 minutes because he would get excited and tell us different stories that he hadn't planned on telling or show an animal longer than intended. It was a great show - if you ever have a chance to see him - go!
~~~~~~~~~~~~~
Wednesday I stopped at an Estate Sale. I walked into a 10,000 foot warehouse stocked full of awesome glass, pottery, vintage clothing and all sorts of fantastic vintage items. My heart beat in my chest and I was weak in the knees. The first thing I saw was a five gallon bucket stuffed with aluminum tree branches. I asked how much for the branches and I got a long lecture about what it was (an antique Christmas Tree), what it sells for on ebay ($300.00), what he had it for in his booth ($150.00), blah, blah, blah. Then he proceeded to tell me that I could have it for $40.00. I said my famous, "I'll think about it" (Translation: no freaking way dude) and went to look around. A few minutes later he came and found me and told me that he had found some more branches to add to it and the price was now $60.00. Way not to get the sales, man. I spotted some Matte White pottery and went to check the prices. But, after the tree fiasco, I pretty much knew what I was in for - and, I was right. I saw pottery priced from $30.00 to $150.00. There were some nice pieces, but nothing worth nearly what it was priced. Ladies hats were $10.00 each, clothing was $20.00 an item (yes, you read that right. $20.00) and so on and so forth. I left empty handed. Everything was to be 50% off on Saturday, so I thought I might take another look then. I did find a child's sized Royal typewriter with glass topped keys that interested me for half price day (It would have been $15.00 then), but it was gone when I returned today.
Today I did buy a few boxes of miniature Shiny Brite ornaments. I love the small Shiny Brites the most and use them on any number of little trees throughout my house. I love the boxes too. Even when I checked out, the lady wrote down, "Antique Glass Christmas Ornaments". They were quite full of themselves. They are neat. They are cool. They are vintage. But, they are not antique. 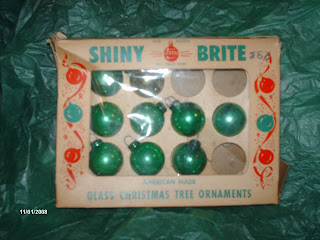 Small green ones with a few missing. Cute box, too! 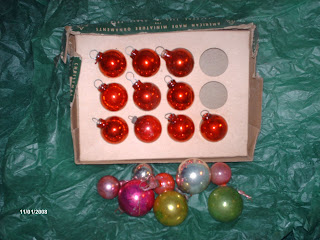 Small red ones, missing a few too but with a few extras in different colors thrown in too. Nice long ornaments. Some of the silvering is coming off, but turned just the right way - no one will be the wiser. 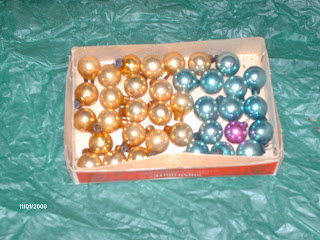 These are itty. Bitty. Itty Bitty. The whole cardboard box fits in the palm of my hand so the ornaments are a bit bigger than a pea. 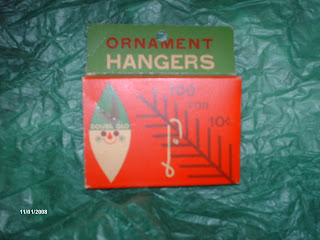 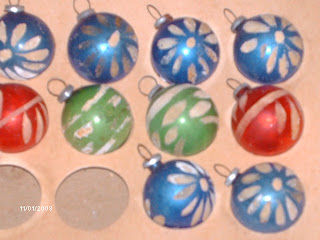 My favorites - tiny flocked ornaments. I paid $7.50 for all the ornaments and the ornament hanger box. That's more than I normally like to pay, but I loved the little flocked ones so much. This was the only thing I bought all day today, so I splurged. That's still only a bit over $1.00 a box, so not so bad, I suppose. Now, I just know that the Super Cheap Thrift will have about nineteen boxes of miniature flocked ornaments for 10¢ each..... 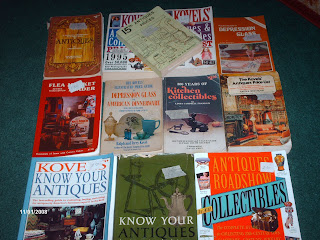 Friday I went to two sales and spent a total of $3.00. I got all these Kovel's price guides and pricing books for $2.00 total. The prices are outdated now, but everything I learned about collectibles came from Kovel's and pricing books in general. The prices might not be correct, but there is still a ton of information about makers marks, dates and history of items. 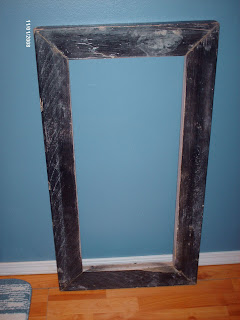 I got this heavy old frame for $1.00 at another sale. Actually, my Dad was with me and he threw a dollar down for it, so I suppose it was free to me. He doesn't often "get" my junk, so I was surprised he paid for something so odd! I don't know if this is a frame or an old window frame or what really. As you can see, it is black on one side and... 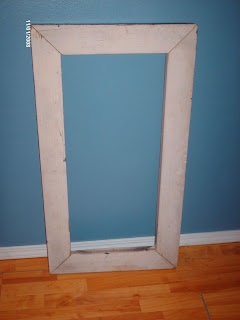 Pale Pink on the opposite. (I know it looks white, but it's pink, I swear). I thought it would look interesting "framing" something on the wall with the black side out for Halloween (next year) and pink for Easter/Spring. Or, I might just sit in the garage with all my "someday"projects. Who knows!