Going to the eye doctor is the strangest experience. Unlike regular doctors, where you go in sick and come out with medicine, feeling better, you go in the eye doctor's office seeing great and leave blind as a bat. Now, mind you, my eye doctor is super sweet and the nicest most caring eye doctor that I have ever had. They just make you do odd things. You put your contacts in to get to the office. Then they make you take them out, then ask you to read the chart on the wall. I always respond with my same witty remark, "What wall?" Ha ha ha. I'm a real pistol when I am blind. (This might be a good time to mention that I am a -9.50 in one eye and a -8.50 in the other. I literally am, practically blind.) Then they shine a really bright light in your eyes, then shoot big painful puffs of air in each eye. (Hate that part the most of all.) Then they ask you to walk down the hall to the exam room. Again, Miss Witty says, "What hall?" ha ha ha. There I go again. Then they test your eyes.

Put in your contacts so you can see if the prescription is correct, then take them out again. Then the Dilating Drops OUCH Those suckers hurt. Three drops in each eye - just enough to give you Tammy Faye Bakker eyes, then they leave you in a dark room with no one to talk to and nothing to do. Hum dee dum. Back she comes- shines a 8,000,000,000,000 watt light into your eyes while saying "Look up to the left, down to the right, up to the center, over to the left, down at your knees" It's like the world's worst pop quiz. "My left, or her left? Her knees or mine?" Once she is done, you can put your contacts back in and leave. But, wait, you cannot see. It is blindingly bright. You have to attempt to sign the receipt. You accidentally sign the clerks forehead instead. "What receipt?". Ha ha ha ha.

My first eye appointment was when I was nine years old. I could see fine at school, and then one day, quite literally, I couldn't read the chalkboard. Not even from the first row.

Mandatory eye test day rolled around and the nurse tested my eyes. She asked me to tell her what I saw on the screen and I probably said "A Goat" instead of "E A J G B" because I couldn't even see the screen, let alone what was on it. So, off we went to the Opthamologist for an eye glass prescription. He looked in my eyes and said, "My god! You're as blind as a bat!" And, being the strong women my Mom and I are - we burst into tears. He said, "Uh, I was kidding". Not funny, Mr. Goober. I got my eyeglass prescription and went back to 4th grade. I was greeted by Mr. William Burkett, one of my fellow classmates (who happened to already be in trouble and sitting in the hall) who greeted me,"Hi, Four-Eyes". Much to his surprise, my Mother rounded the corner right after that statement. He never called me that again.

I never liked my glasses, but I always wore them because I was pretty much useless without them. One day in Junior High we were pushing this giant ball around. I mean that ball was about seven feet around. There were two teams and each team was trying to push it to the opposite side of the gym. Something happened, (certainly nothing to do with my swift athletic ability - ha ha ha) and a bunch of us fell down. My glasses flew off, just out of reach, but I could still make them out. One of my team mates was someone I deplored and she deplored me even mored (I had to make that rhyme, I just couldn't help myself). In was like slow motion, I saw sneakered foot coming down hard, right above my glasses, sure to smash them to smithereens. That's when my enemy grabbed them out of they way and handed them to me. She said, "My Mom would have killed me if I broke my glasses." So, for one millisecond, we shared a special bond. Then it was back to hating each other like good old 7th graders do. (Or rather, did, The Bean is headed to 7h grade and I am sure they all just adore one another).

My eye doctor refused to give contacts to anyone under the age of 16. He was a cranky old fart, in retrospect. Before I started High School - which was 10th grade - I was granted permssion to get contacts. Yeah. I have worn them ever since. I've never had an eye infection, never lost a contact or any other horror stories people have told me that has happened to them. 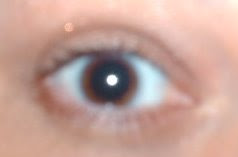 This photo is my actual eye. It's blurry to me, and to you probably, but really blurry to me.
It is now 2.5 hours since I had my eyes dilated, and they are still pretty much all pupils. I am typing this without spell check because I can't see the screen, let alone the keys. I'm probably a row off and it will look like a one armed baboon typed it. I don't recommend using the flash when your eyes are dilated. Not one of my smarter moves.

Hey, aren't you glad I went to the Opthamolgist today and not the Gynecologist?
Posted by Shara at 2:02 PM