I made a run to the Super Cheap Thrift this morning. When I got there, a family had set up a big sale in the lot next to it . We also ended up hitting one yard sale and another thrift in town on the way home. I found a lot of neat things that I failed to photograph, including a roll of gift wrap that looks like it is covered in old cigar labels in the free bin, an old beat up chippy green chair for $1.00 that is in the side yard holding an old watering can as we speak (and getting poured on!), a huge old seagrass basket for $1.50 and a wee little miniature seagrass basket for 25¢. 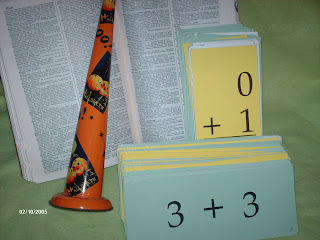 A nice old dictionary from 1966 for 50¢. (Hey! That's not old!) Actually, it's a reprint from 1933 and has the old graphics and definitions. I bought it to cut apart and add to Ephemera Packs and to use in my own crafts, but I really do not know if I can cut up a book. It's against everything my Mama taught me! The 25¢ flash cards are pretty new, but I think they could still be used in Ephemera packs. The tin Halloween horn came out of a FREE box at a sale that had little worth even buying but the good stuff was in the free box. I got a small cut glass sherbet dish, an old tin thermometer and the Halloween horn out of their free box. 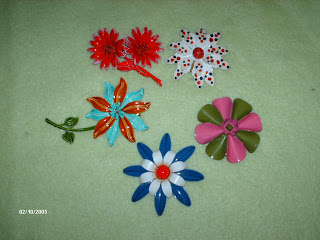 This is what I did buy at the sale with the FREE box - five flower pins. I would never wear them, but they are bright and cheery and happy and everyone else in Blogland buys them so I did too. What a follower! They were $1.00 each and they are all marked W. Germany on the backs. I appreciated the Patriotic-ness of the red, white and blue flowers (The white with red polka dots also has blue polka dots, they just didn't show up in the picture). 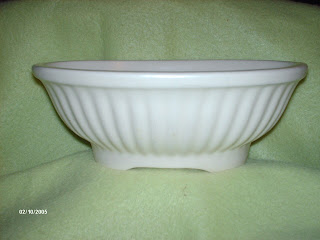 I bought this at a thrift that I rarely go to because they usually price 85% of their items $8.00. I'm not kidding. Everything is pretty much $8.00. It drives me nuts. You can't just willy-nilly grab things at $8.00 a pop. This lovely Haeger mattte white planter was in the "Antique" section, so I assumed I wouldn't be able to afford it. But, it was only priced $3.00 (which is still more than I normally pay). I think they had it priced low because it was insanely dirty and covered in melted candle wax. But, it cleaned up beautifully. 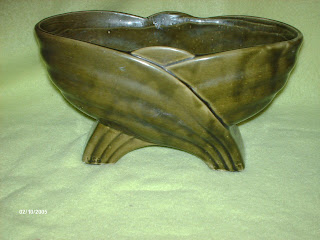 This very heavy unique planter was 55¢ at the S.C.T. (I justified buying the $3.00 one since I had only paid 55¢ for this one.) I show my Matte White Pottery collection, but what you don't know is that I have a very large collection of other colored pottery too. I need to made a decision on what I want to keep and what I want to sell soon. But, I love it all!!!! (The white stays HERE.) 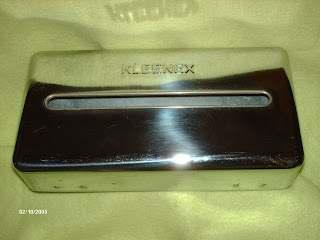 This cool old chrome wall mounter Kleenex cover was in the FREE box at the S.C.T. It has some minor rust on it, but an S.O.S. Pad cleaned it right up. Our bathroom has all chrome fixtures and I think this would be neat on the side of the vanity with Kleenex in it. 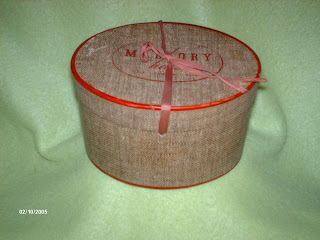 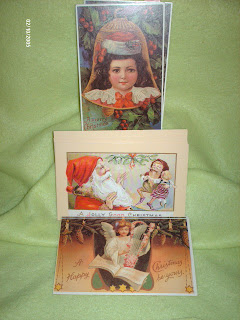 These are actually reproduction postcards - but I got 17 of them multiples of each one shown - for 55¢ total. More Ephemera Pack* fodder and items for my crafts. *Note to my Mom - call me an I will tell you what an Ephemera Pack is...And, Happy Anniversary!)
Hope everyone has a safe and fun 4th of July. Not much planned around here. There is a chance of rain most of the day and it is storming right now, so I don't expect much in the way of outdoors activities. Saturday our little town has Freedom Fest, so we will go to that and watch the fireworks. The Bean wants to go buy fireworks, but I hate those things. So dangerous and such a waste of money. (I sound like an old grumpy man.) He really only likes tame things like parachutes, snakes, colored sparklers and a few shoot-y things. I'll probably just give him $10.00 and let him make the choices. He's a good bargain hunter.
Speaking of bargain hunting, I took The Bean to Toys R Us today to do a little shopping. We gave him $100.00 from our stimulus check and he thought he wanted to buy the new Nintendo DS Guitar Hero. Luckily, they had one on display to try out. He tried it and didn't like it. So, that saved up $50.00. He shopped around and found this huge obnoxious NSECT remote controlled dart shooting insect-y thing that was $100.00. It was $69.99 on the shelf, but scanned at $49.99 and I had a coupon for $10.00 off so, he got that $100.00 thing for $39.99. That's my boy. The bargain hunter. *Tears*
STAY SAFE!!!
Posted by Shara at 9:16 PM