It Was Meant To Be

Yesterday, when I wrote about the big sale with all the cool old vintage things, I didn't tell about the quilt that I left behind. Actually, it was a only a quilt top, but it wasn't an ordinary quilt top. It was a Crazy Quilt - the first one I have ever seen outside "The Antiques Roadshow". This one was jewel tones and earth tones - made from old silk with stitching around each piece of fabric. Some of the silk was deteriorating, but not too badly. It was stuffed in a box under a table. When I pulled it out, the lady commented that it was a "treasure" and told me how old it was and how it was made. The cool thing was, she told me this in a manner that I could tell she knew I understood and appreciated it. Not one of those "Thatsa" salespeople ("That's a rug", "That's a CD player"). She was very nice. After all that discussion and talk about the quilt and it's age and craftsmanship, I was half afraid to ask the price. She quoted $10.00 on it and commented that it was a "steal". And, she was right. It was a steal. And, I really don't know why, but I put it back in it's box under the the table. I guess I was thinking of not spending $10.00 on something I really didn't need and trying to budget my money for other sales. As I was leaving she told me to "Come back tomorrow". Last night, I kept thinking about that darn quilt. My first thought when I woke up this morning was that quilt! (Well, that and I needed coffee.) I left the sale at 10:00 am yesterday and couldn't get back there until about noon today. So, I knew it would be gone.

When I pulled into the sale, the lady said, "You did come back!" I said, "I kept thinking about the quilt top, so I'm sure it's gone". And, she said, "No, it's still waiting for you." Can you believe it? I gathered it up and decided to grab one of the big wooden spools for $2.50. In the end, she told me $10.00 was plenty for everything, and then she gathered up all the linens she had and gave them to me. Free! I thanked for her for the deal and she said she was really happy the quilt was going to a home that appreciated it and loved it. Lady, that's my thing. Take it home and love it. 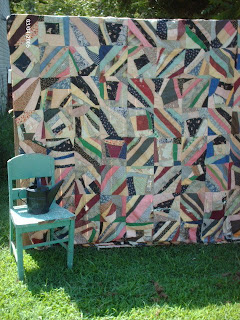 Isn't it divine? There are hundreds of silk swatches, thousands of stitches. I just think it is lovely. 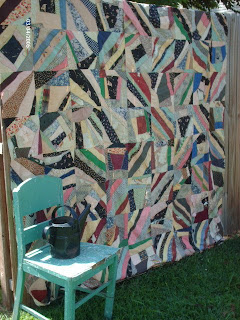 It is quite large, although I haven't measured it. It's at least a full size quilt. I mentioned having it finished, but she recommended, and I agree, that leaving it unfinished, per say, you can see the stitches and had sewing on the backside. 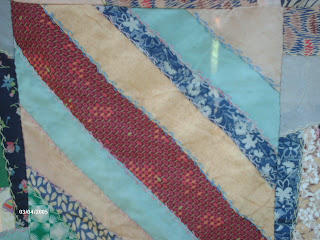 So many interesting fabrics and designs. 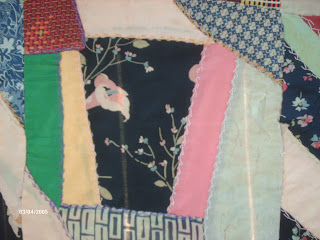 The colors are pretty bright considering it's age. Most of the fabrics are silk, but there's old feedsack material in there as well. 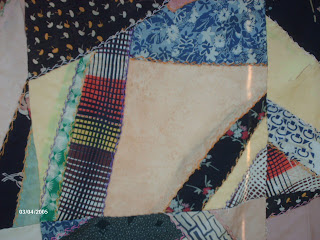 Each square is a square, but the designs of each square is different, which is of course, the very meaning of a Crazy Quilt. 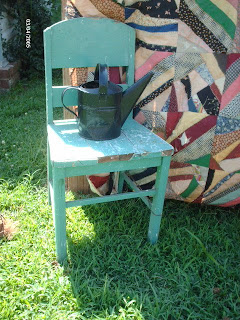 Since it's in the picture, this old green chair came home with me from a sale for $1.00 a couple weeks ago. It's holding a 25¢ watering can. The Breadman hates mowing the yard because I have all this junk fabulous stuff sitting all over the yard. Actually, he hates mowing any way you put it, so what's a little junk in his way? 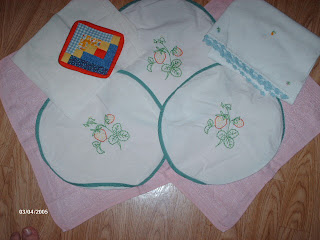 Here are the linens that the lady gave me. Two pink linen napkins, three strawberry embroidered doilies, a small quilted potholder, a sweet embroidered dishtowel and an old sugar sack. Wasn't that sweet? 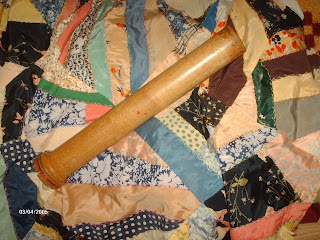 Here's the spool. It's really tall. I have quite a few of these. Have I ever shown what I do with them? Wait, I'll go take a photo. 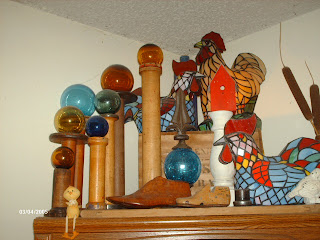 (Man, I love modern technology and digital cameras.) I have them all on top of a bookshelf holding blown glass fishing net floats. The roosters are lamps so when they are on, the glass floats glow too. I think it looks interesting. (Love that wooden baby shoe form!) 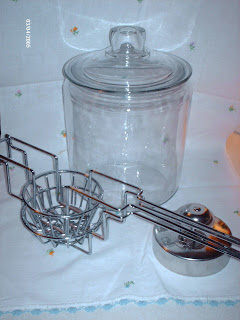 We stopped at one other sale today and scored this nice glass biscuit jar for $1.25. I have another one chock full of old molds, so now I have another one to fill up with something. The other two items are from yesterday's S.C.T. run. The Bean is interested in cooking and baking, so now he shops the kitchen sections at thrifts instead of the toy section. These were his two finds yesterday. The basket thing is a tortilla bowl fryer basket for taco salads and the other is a Pampered Chef Press and Seal for making small pies and tarts. We tried the tortilla fryer last night and it worked great. Now we just need to make some mini pies!

The weather man just forecasted temperatures at 100 or so until at least August 15th. That, is simply unacceptable. I guess the weatherman didn't get the memo that I HATE SUMMER.