I Found Prince Charming and Other Tuesday Tales

Brrrr. It's cold in here. Just the way I like it. Yesterday morning the A/C guys were to be here at about 7:30 and they didn't arrive until 9:00. I thought that meant the day was going to go off even worse than I had imagined. And, I had imagined it being awful. But then one truck arrived with a trailer behind it, then another truck, then another and then another. And a few minutes later one more arrived. It looked like an A/C repairman car lot in my yard! I had seven men going this way and that way and in the Attic, in the driveway, in the backyard, etc. They all had their own specific job and went right to it. By 11:30, a mere 2 1/2 hours after they had arrived that they would be done that day instead of it being a two day job as projected. Whoooopie! No camping in the living room with box fans! They did run into a few minor snags, but it was up and running about 5:30. It's cool enough in here that the Breadman is wearing these doofy slippers that look like football cleats that I bought him as a joke. He looks rather interesting in his shorts and cleat slippers.

This morning the A/C guy had to stop by to pick up a trailer that he had left in the yard. As he was leaving he told us that there was a little white dog in the yard. I knew that it was Prince Charming, the dog that belongs to the 4 year old girl next door. Prince Charming can escape through missing fence pickets and an open gate. He can also escape through the smallest gape. Take a look: 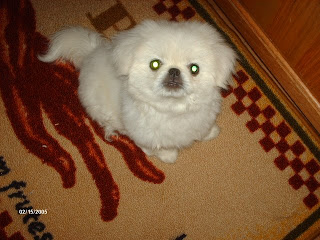 This is Prince Charming. We brought him in the house and he terrorized the cats for four hours. They all went and hid under the beds until we took him home. (non one was home adnt he fence had a mising picket, so DH had to break intot he back yard and fix the fence). While he visited, Prince Charming took a nap under the toe kick of the kitchen cabinets. The toe kick! He is one teeny little comical dog. When we brought him in, he had a piece of rope tied around his neck. I'm not sure if he was tied up in their yard or the littel girl had tied it there and forgotten it or what. But, what I do know is this - if he arrives on my doorstep one more time with rope around his neck, you know what? Prince Charming will be living at my house. It wouldn't be the first time I have had to rescue pets from bad owners. There once was a little white kitten that the neighbor kids used in a game they called, "Bombs Over Tokyo" which involved high pitched whistling and throwing the kitten. That kitten mysteriously disappeared and may or may not be at my Mom's house this very minute. (She's at least ten years old now).

Now might be a good time to introduce you to K.D. Kat. K.D. Kat has been on my front porch for three straight months, but he technically lives two doors down. Every time the neighbors walk past, they take him home, but he runs back here. Hell, he comes running when I say, "K.D. Kat" and that's not even his actual name! KD was derived from the fact that we called him Katy until we realized that he had some extra equipment that a Katy wouldn't have. Oops.*** 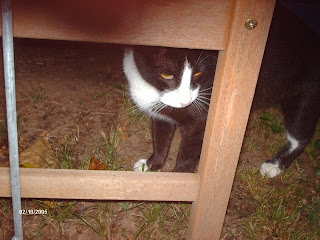 Today we did a little retail shopping. Retail store brand name shopping. Oooh lah lah. We went to Shoe Carnival and we all got new shoes - $138.00. It was buy one pair, get one pair 1/2 price plus one was on sale, but still $138.00 for three pairs of shoes is still crazy. Yes, I know some people pay that much or more for one pair. *Shudder* 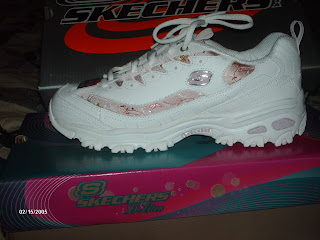 What? You weren't expecting something fashionable like high heels were you? Not me. I am an Athletic Shoe kinda gal. (But, sadly, not an Athletic gal.)

Next we went to TJMaxx. That store fascinates me. It is like a digger yard sale - piles of stuff, boxes of stuff, damaged goods etc., but they are still selling it at retail prices! Yikes! Oh, sure, it's discounted, but it's still high (in my eyes). But, sadly, sometimes you have to pay more than a quarter for stuff. I've been searching for a new purse that isn't one of those purses with the short straps that makes it go under your armpit. I like a longer strap. I finally found a purse at TJMaxx - Stone Mountain retailed at $88.00, but I paid $24.99. I guess that's a good deal. But, I just know that I will find the perfect purse at the Super Cheap Thrift for a quarter this week. Oh well. 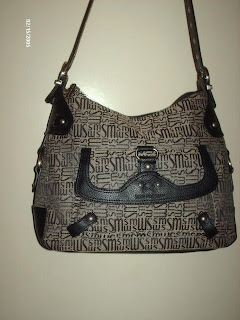 It is a Stone Mountain purse, so it has SM*SM*SM*SM all over it. I believe it is actually for Shara *Mom*Shara*Mom.

At TJMaxx I also bought a mammoth glass jar of sanding sugar for cupcakes and sugar cookies for $3.00. I only mention this because as I was paying, my husband of 17 years picked up the jar and said, "Oh, you are buying yourself some bath salts. That's nice." Now might be a good time to mention that I haven't taken a bath in the entire 17 years we have been married. I don't call him "Mr. Observant" for nothin'.

***As we were leaving today, the little boy that lives two doors up and technically "owns" KD Kat came over for a conversation. He is about 4 years old too. I tried to ask him the cats actual name, but I couldn't understand what he said. I thought he said Benji, but he said that wasn't it. He acted embarrassed that I couldn't understand him, so I changed the topic of conversation to his Daddy's Dump Truck.

"Yes, dat's my Daddy's Dump Twuck" (See why I couldn't make out the cat's name?)

I said, "I saw you leave in your Daddy's Dump Truck one day, is it fun to ride in it?"

So, if you see a four year old in a dump truck giving you the finger...that's my neighbor! Say "Hey!"