Too Hot to Junk. I Quit. Possibly. Maybe Not. We'll See.

Friday we went to a Benefit Sale to help pay Medical Expenses for a local couple hurt in a recent Vehicle/Pedestrian Fatality. A man was driving along a windy narrow road, when he rounded a corner and hit a young 23 year old girl that was jogging, then crossed the center line and hit another car head on. The driver that hit the jogger was unharmed (a DWI was issued later), the jogger was thrown an ungodly distance, knocked out of her clothes and shoes, and died on impact. The couple in the other car each have broken legs, broken arms and broken wrists. They are in Rehab and getting better from their injuries, but having great difficulties not seeing that poor girl fly over their car as they were getting hit as well. It was such a terrible accident, killing the girl and affecting her family, affecting the family of the Drunk Driver and affecting the couple and their family. It was an accident that could have certianly been avoided.

The sale was held a few doors up from our house at the house of one of The Bean's friends. It is her Aunt and Unlce that were hurt in the wreck. They had publicized the auction for a few weeks, so I knew it was coming. The night before, we did a drive-by to see if they had much. And, they did. Tons! It took every fiber of my being not to stop and have a looksie. When I did get there on Friday, they said, "We saw you drive by last night - you should have stopped and shopped!" Doh! After we left, we hit a few other sales, but the heat was gastly, so we headed back home until we took a trip to Sam's Club later in the day where I purchased enough pickle slices, croutons and jelly beans to feed an army. (Seriously, what gets into your head at Sam's? Did we need a bag of croutons as big as a bed pillow? Will we eat 6,000 pickle slices before February 2010? We dang well better!)
So, here's the loot from Friday. I do think it's interesting when I go to six or seven sales and randomly buy things and then discover when I get home and look at it all, that it has a theme of some sort. Friday's theme:
RED 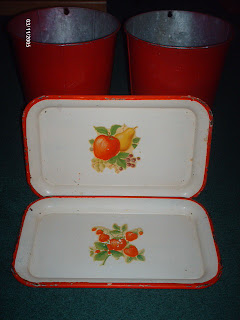 Two old Maple Syrup Buckets for 50¢ each. I bought these at a sale that only had all new items and kids stuff, so I was pleased to spot these under a table. They've been painted red, but the red is peeling, so I may be able to get them back to the original patina. The two trays were 25¢ each. They were extremely grungy and now they are only slightly grungy. 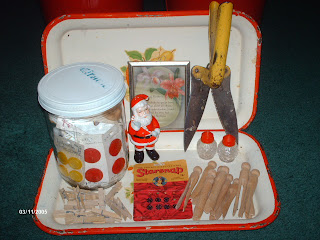 Today's treasures - A giant glass Miracle Whip jar full of carded buttons for $2.00, a vintge Santa Salt Shaker with cork stopper for 5¢, an old framed "Mother" postcard for 10¢, mini glass shakers for 25¢, mini clothespins for 10¢ and the old wooden clothespins were 5¢. The snap card was int he jar of buttons. The o ld garden shjears were today's, "Where did you find this?" item. It seems nearly every week I find an item at a sale and no one having the sale has ever seen it. They hem and haw over where it came from who it belongs to and what to charge. This time the magic price was 25¢. There's a photo on the side over there with my old garden tool collection. 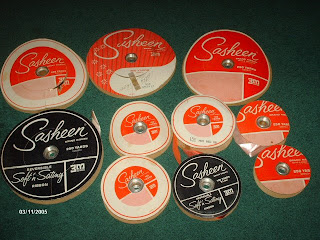 I spotted a big bag with a couple rolls of Sahseen ribbon in it, so I asked how much. It was only $1.00, so I grabbed the entire bag. I was really surprised when I got home and discovered that the entire bag was Sasheen Ribbon. There is Pale Pink, Purple, Coral, Hot Pink, Gold, Hot Red, Metallic Gold, Nile Green and two spools of Shocking Pink (which is a rather namby-pamby pink and not especially shocking). There are 250 yards on each spool -some aren't completely full, but close. So, that's about 25,000 yard so of ribbon. That's 75,000 feet. That's a lot of ribbon!

Today was Kid's Day at the local grocery store, so we headed over there and of course, had to hit a sale or two (or three or four) along the way. DH calls on the store, so the Asst. Manager had made The Bean a special bag of loot to pick up. We went to a Boy Scout Sale where everything was $2.00 a bag and a Foundation of some sort where everything was $3.00 a bag. 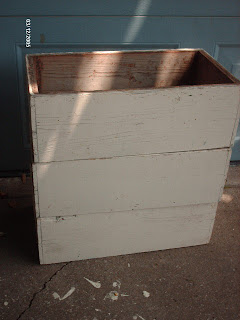 It took three Boy Scouts, two Moms and one Boy Scout Leader to come up with a price for these old white bee boxes. "What'll you give me for them?" was the final answer. I was about to leave when they told me I could have them allt hree for $2.00. Sold. What will they become? Haven't a clue. I just liked the white chippy wood. I didn't even realize they were bee boxes until they told me so. 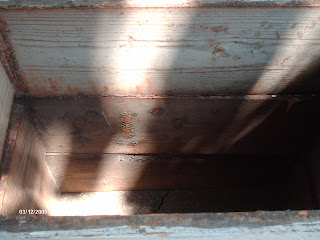 Here's the view inside - they don't have bottoms, so they are more like shadow boxes. You can see the honeycomb and beeswax residue on the sides. I really, really, really want to get a flea market booth, so I think these will go in it as display when I do. 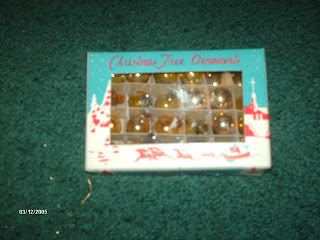 This the worst photo I have ever posted. Sorry. This is a box about the size of the palm of my hand holding 24 little gold blown glass ornaments. I've never seen any so tiny - they are fabulous! 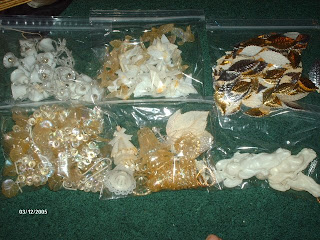 Another crazy bad photo. Sorry again. At the Foundation Sale, everything was $3.00 for a big brown grocery bag full. Well, it was so incredibly hot that I didn't even want to look around much. I spotted a small box full of old wedding cake decoartions, paper/foil leaves, plastic translucent clumps or grapes and other old wedding items. It wouldn't have filled up the bottom of a paper bag, so I asked how much for it and they told me that it was $3.00 since it would have fit in the bag. Meanwhile other people had bags so full and heavy they couldn't ever carry them. The man tells me it's all for charity, so I shouldn't mind. But, I did mind. I know it's charity, but to me, charity is just giving them money. Not buying less, but paying more than everyone else. I ended up paying it, because it wasn't that much and I'm not a total b!tch. I got plenty, and really $3.00 wasn't bad to as much old stuff I found. There's thousands of those foil leaves. 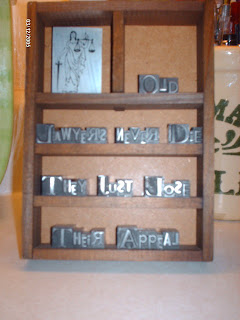 The photos just don't seem to be getting any better, do they? This is a printers box filled with "Old Metal Type Cuts and Engravings with Obsolete Foundry Type" (that's what it says on the back). It says, "Old Lawyers Never Die, They Just Lose Their Appeal". I don't like it the way it is, so the plan it so attempt to pry off all the old metal letters and use them in another fashion. I love old printer's blocks. 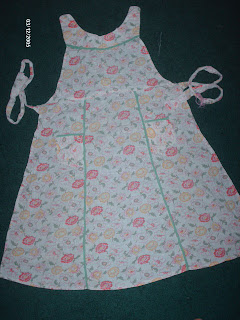 Here's a sweet apron made from feedsack material. I just cannot seem to leave an apron when I find it, even though I really don't even collect them (although I do have my fair share of them on display). 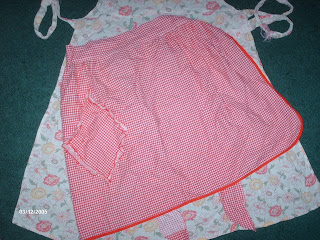 A red ginghman apron with a sweet pocket - both in a $2.00 bag along with all this: 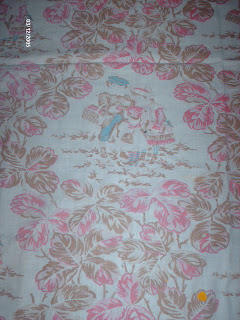 A very large piece of feedsack material with sweet children on it. 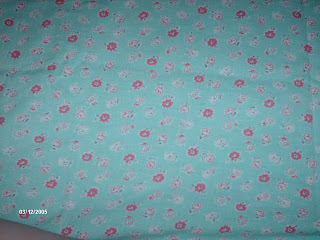 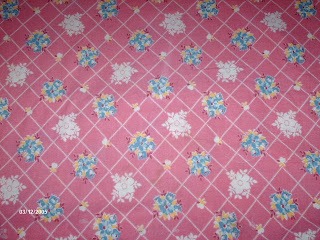 And a big piece of rosey feedsack material. This one is actually a big feedsack that has been cut into a flat peice of material. 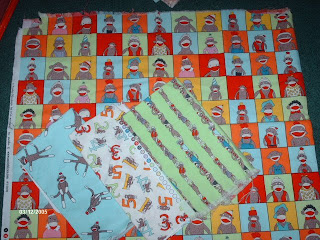 A variety of new sock monkey themed fabric that is so cute,it almost makes me wish I could sew. It would make a fabulous monkeybox Junkin' bag. 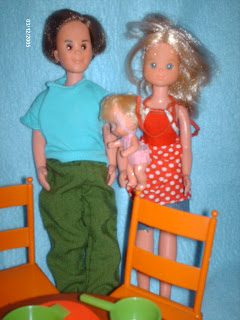 And, on the resale front, a nice and minty 1970's Sunshine Family. Complete! Mom, Dad, Baby, furniture, clothes trunk full of clothes, dishes, pans, sleeping bag, shoes, booklet of ideas to make for your family and on and on. I had the Sunshine Family when I was little. Oh, who am I kidding! I still have them. My little baby is nearly bald in the back because she was my favorite and I carried her in my pocket most of the time. The Sunshine Family is sort of the opposite of Barbie. They are all about family, nature, spending time outdoors and together, not spending money, etc. You were encouraged to make clothes and items for the Sunshine Family. My Mom crocheted my Barbie a Poncho and I nearly got laughed off the playground with that.
(Dear Mumsie, I liked it and I still have it. Love, Your Daughter).
The heat is expected to hit 107 this week. He have horrible humidity, so this will seem like 150! The Bean and I checked out an arsenal of movies from the library, bought the 36 ct. box of Microwave Popcorn at Sam's and plan to hunker down and enjoy the new Air Conditioning and enjoy our last two weeks of Summer Vacation. I might hit a thrift now and then, but I think I am done junkin' 'til the heat breaks. It is just too hot, makes me cranky, makes the Bean horribly cranky and just isn't that much fun in the long run. Come on FALL!!!!
Posted by Shara at 9:03 AM