The Parade, The Fireworks & The Highchair

Last Tuesday we went to the Rodeo of the Ozarks parade. We usually sit at the beginning of the parade route so we see everyone before they get hot and grumpy and are still in a good mood to cheerfully hand out candy to the kids. Another reason is that *hopefully* the horses (over 500 of them) can hold their poo until they get past us. Most of them do. Eeew. Anyway, we were seated and waiting for the parade when a sea of people came in from the right. It was the D*ggars. Nearly all of them plus over half of the H*lt family that lives in town and has 12 kids. There were nearly 30 kids!!!! The Bean didn't stand a chance of getting any candy with 30 of them hopping up and down with their plastic sacks held out for candy. It was pretty interesting, to say the least. In fact, I hardly paid attention to the parade because I was watching them the entire time! (*I am hiding part of their names to keep me safe from the D*ggar Googlers that keep finding my blog and sending me hateful comments and emails.) 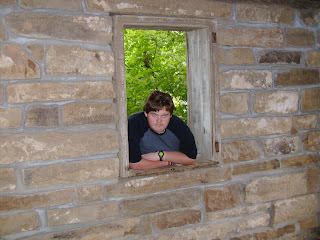 The Bean at the Museum last week.

Last night we went to our town's Freedom Fest. We have 5,000 people in our town, but they are able to budget in a huge fireworks demonstration every year. It is one of the best in the area, but we all keep it hush-hush to keep out the out of towners. Last night we were all sitting in our lawnchairs waiting for the show, when a huge bank of clouds came in. I have never seen such black low-lying clouds. People started leaving and some went to sit in their cars. Meanwhile, The Bean had ran into his old school crowd and went to be with them (which was terrifically good for him to so). As the lightening started, I tried to call him to get him to come back in case the storm hit. But, he couldn't hear his phone because his dumb ringtone is some guy saying, "Houz dat?" So, the very first time we actually needed his cellphone for a potential emergency, it failed us. Thankfully, we did meet up after the fireworks. The Superintendent came on the intercom and said that due to the storm they were going to "blow 'em fast and blow 'em low". And he was not kidding. They set the entire display off at one time. It was one of the most beautiful yet terrifying things I have ever witnessed. A twenty minute fireworks display went off in less than one minute. It was incredibly loud and incredibly bright. One of the 7th grade cheerleaders was siting at my feet and she yelled, "My heart hurts!" It just encompassed you and froze you in your chair. As soon as the last one went off, the rain hit. We made it to the car just as the rain hit hard. Happy 5th of July! 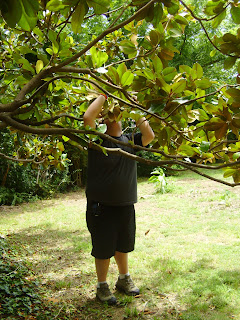 The Bean smelling a Magnolia Blossom. I have been searching for a bloom low enough for us to sneak a smell without trespasing. This one was at the museum. If you've never smelled a Magnolia Blossom - it is divine - like a freshly cut lemon wedge. But! Never pick a bloom - it will be brown within the hour.
Today we were getting ready for the A/C installation tomorrow. The Breadman climbed up in the Attic to see if we had anything up there. All I could remember was a bag of baby clothes from The Bean. He ended up finding his infant carrier, his high chair and all his sheets, blankets and crib bedding. Awwwwwww. I hadn't seen that stuff in 10 years. Boohoo. *Sniff*Sniff* I decided to throw out the baby carrier because it isn't safe to donate (My baby's infant carrier is an antique!), donate the high chair and donate most of the bedding. I decided to keep his crib quilt - a sweet Daisy Kingdom quilt and one of his blankies. ***BOO**HOO**MY BABY'S GROWED UP!*** So, we put the highchair in the truck to be donated tomorrow. Later, I noticed The Bean hanging around the back of the truck looking at his highchair. He was acting sad and being all quiet. I asked what was wrong and he said quietly, "I just saw my high chair for the first time since I was a baby and now you are just throwing it away."

Yep, it's back in the attic.

He may be growed up, but he's still my baby!