Today was Week One of the newly implemented "Free Wednesday" here at the monkeybox household.  Wednesday The Breadman is off so we always go do something as a family.  Sometimes we go to a movie, the arcade, the walking trail, grocery shopping, the library, a picnic, the park, whatever...
But, today I decided Wednesday's would be Free Days.  We could do whatever we could find to do - but as much as possible of it had to be FREE.
We started our day at Chick-fil-A for lunch and used coupons for three FREE Chicken strips from this year's Chick-fil-A calendar (that we got for FREE, I might add).  FREE lunch.  Good start. 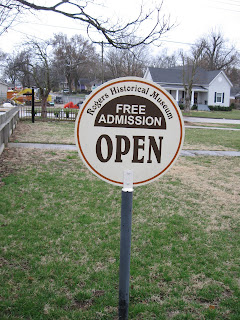 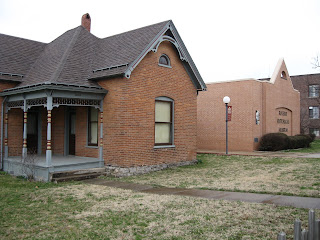 Next, on to the Rogers Historical Museum where admission is FREE.  We went on a really cool guided tour of a home built in 1895 that is fully furnished with the original furniture.  Everything was so interesting to look at that I had a hard time remembering I was in a museum and not a thrift store.  Boy, I would have loved to buy some of the things I saw in there! 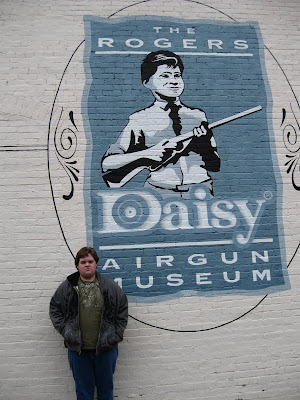 Next it was on to the Daisy BB Gun Museum where they had this in the window: 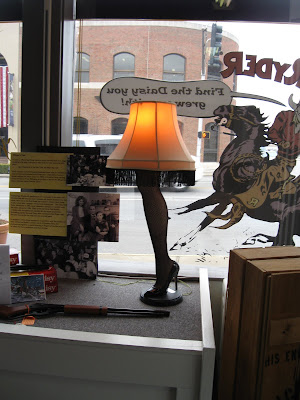 It's Fra-gee-lee.  It must be from France! 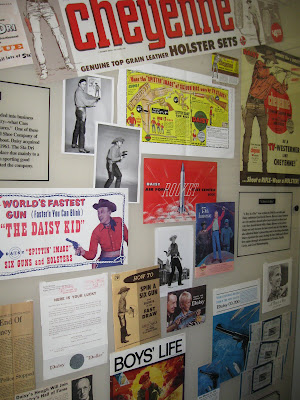 We looked at room after room of BB Guns and BB Gun related advertising and ephemera.  It was interesting, but a pretty quick walk through.  When we reached the back of the building, a lady appeared and announced it was $2.00 each for the two adults.  Okay, not FREE, but cheap.  After we paid, she handed us two collectible Daisy BB Gun Medallions that were price $2.95 for FREE.  So, I think we sort of came out $2.00 ahead on that deal. 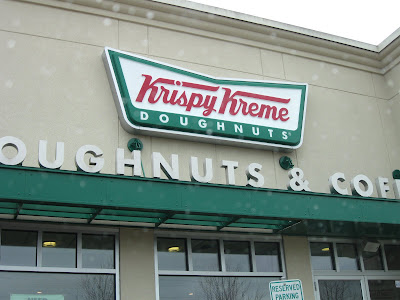 Next we headed for our first taste of Krsipy Kreme donuts.   We had never been to a Krispy Kreme, so we had no idea what a cool place it was.  They were making fresh hot donuts, so we lined up with the crowd at the glass and watched them come down the line through the oil and into the glaze.  I was lucky enough to be standing by a group of seven year old kids that were equally excited about the entire process.  They had been there before, so they talked me through it.  They didn't seem to notice that the 40 something old lady was hopping up and down saying things like, "On no, that one fell off!" and "Look at the glaze machine!" 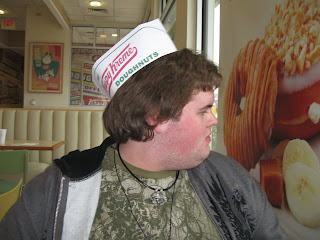 We even donned paper Krispy Kreme hats to thoroughly enjoy the experience.  Now, I know you all  probably already know this next tidbit, but we had absolutely no idea that the lady at the counter would bestow one of those hot fresh donuts on us for FREE.  Yippee.   I'm not a donut fan.  They always look much better than they taste and they give me heartburn, so I never eat donuts.  These, however, were a little bite of heaven.  Oh.MY.Word.  It's probably a really good thing that Krispy Kreme is about 30 miles away or I fear me and those 7 year olds at the window might get to be really good friends. 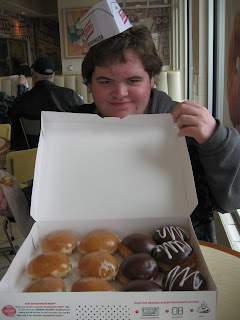 What a treat!  Those FREE donuts fit right into our FREE day just perfectly. The dozen we decided to purchase, however, did not!  But, how could we only eat on Krispy Kreme in our entire lives?  We had to have some to take home.   We still only spent $11.00 for our entire day out - lunch, two museums and Krispy Kreme.  Not bad, right?   What shall we do next week?           *For the record, we did go to an awesome Thrift Store packed to the gills with junk and I spent $18.50.  The Bean declared that I had blown FREE day, but I insisted that since I had pocket money, it didn't count.  It didn't, did it?  (Those thrifty finds to follow tomorrow).
Posted by Shara at 10:11 PM