Often I joke about "needing a drink".  Well, I don't drink.  Anymore, that is.  There was a time when I was quite the Boozehound.  Once I found myself at a party surrounded by a bunch of bikers sitting on motorcycles.  They had Apple wine.  It smelled good.  And I wanted some.  I went from person to person, batting my eyes begging them for alcohol.  Just a taste.  Everyone there knew that it wasn't good for me, but to appease my thirst for alcohol, each person gave me a teeny sip.  They had no idea that I was going to every person in the group and getting teensy sips.  Twenty five teensy sips make for a half a bottle of Apple Wine.  I was on top of the world, feeling good.  But, suddenly, my world began to spin.  My stomach lurched.  Suddenly, I needed to use the restroom.  As I sat on the toilet, the room began to spin and I fell to the floor in a heap.  It was the day I reached a new low point in my life.
Here is a photo of me at the pinnacle of my Booze fest.. 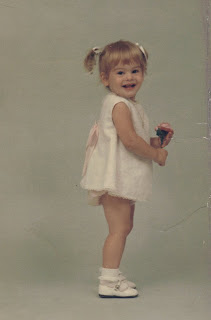 Yep, I was three years old and I wanted it bad!  I would fake a cough "Eh, Eh" to try to get a sip of Lime Vodka from my Mom.  It worked once, then they figured out I was faking it.  "Eh, Eh."
When I got older, I gave up the taste for alcohol, but I began Go-Go dancing.  I would go to the bar, stand at the top of the stairs by the Jukebox and dance to the Beatles.  "Hey, Jude" being my favorite.  I had Go-Go boots and everything.  I would swing my hips and the men would ply me with Beer Nuts and Shuffleboard money, all the while watching me dance.  By this time, I was four. 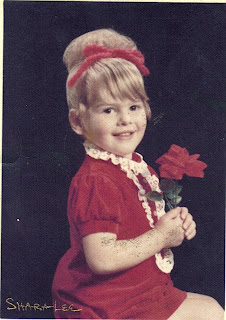 About this time, I also had the major hots for an older man.  I threw myself at him and quite frankly, he was quite smitten with me.  I had a photo shoot about that time, and when the proofs came in, I knew exactly the photo that my man needed to remember me by.  I took a copy and brazenly marched over to his house and handed him the photo, suggesting that he put it in his apartment. 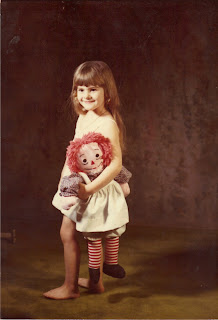 Me in my slip with the strap pulled down seductively over my shoulder.  What a tramp! 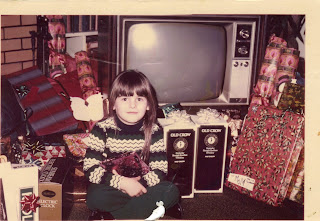 By the time I was seven, I no longer danced for money or drank alcohol.  Apparently, everyone else in the family did as is obvious by this Christmas photo.
So, at the tender age of seven, I cleaned up my life. 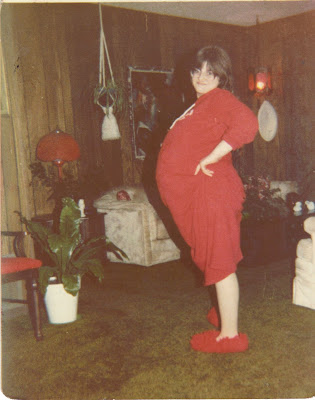 Until Junior High anyway.
But, that is a post for another day!
Posted by Shara at 12:28 PM