Yeppers.  You read that right.  I went to a CHURCH Rummage Sale and TWO Estate Sales this weekend.  Thank you, oh mighty Thrifting GODS, thank you.  The dry spell is over.  Winter is gone...almost.  Spring dune Sprung and all that crap.  Except for the fact that it is going to snow this weekend....
I knew there was an Estate Sale in town, but I hadn't planned on going that way because I had errands to run the other way.  But, my errands got changed a bit and I was able to go after all.  On the way there, I spotted a HUGE banner that stretched across an old restaurant - RUMMAGE SALE.  I don't know about you, but those are may favorite words.  I do like to rummage.  Dig through Stuff.  Good times.
I went to the Estate Sale first, since I was already headed there.  There wasn't a whole lot left, but I'm never looking for priceless antiques or expensive items anyway.  I like the junk that no one else wants.  I always head straight to the garage.  There's always good junk in the garage.  Case in point, a big box of Christmas stuff sitting in the corner of the garage and a few miscellaneous items scattered here and there throughout the garage.  I added it all to the big box and asked the magic question..."How much?"  Two bucks for it all.  Cha-ching.  SOLD.  I didn't really even bother to see what was in it.  For two bucks, that's a nights worth of entertainment for me.
The man that lived there played cards.  A lot.  I found twenty eight decks of cards here and there, some old Congress cards in the velvety boxes, some with neat old graphics, some regular cards and be still my heart....a box of Lawrence Welk cards complete with old Lawrence himself on the Ace!  The guy told me that I could have all the cards I could find in the whole house and all the bridge tallies and such for $1.00.  I also found a Gurley lamp post candle laying in the middle of the bedroom, completely out of place.  Not sure where it came from, but it came home with me.  There was a neat old Key Keeper hanging on the wall, so we grabbed that too.  In the end, the box of Christmas was heaping with the cards and all the other odds and ends we gathered up.  The man ended up just taking $5.00 for it all.  Plus he gave The Bean a book about Fossils when the basket of fossils we attempted to buy had already been sold.  I love it when they deal themselves down!  And give you freebies! 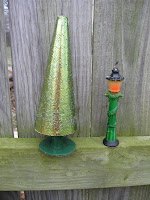 Miscellaneous Christmas items from the box o' stuff.  More in the following photos too.
On to the Rummage Sale.  It was for a 7th grade trip at a local private school and the kids were all there.  And they were loud, obnoxious and generally in the way playing with the merchandise, crashing into me as they ran about and generally being a bother.  I thanked The Bean for being a responsible quiet kid and got to shopping.  Stuff was strewn about in a haphazard way, I had to make several trips through there to see it all.  My first find was a neat old bottle brush tree - a three footer, still in the box.  When I went to see how much it was, the lady gave me a song and dance about how old it was and it was vintage and how much was I willing to pay for it?  I said, "Thanks, but no thanks".  And I walked away.  Then she said, "Two dollars?"  "That's fine, thank you," I said.  I do not like it when they pull the vintage card and start trying to make you feel guilty for buying something cheap.  If they knew it was vintage and they knew they wanted a big price for it, it should have been priced, for goodness sake!  She could have said $5.00 or $20.00 and I would have made my decision then.  I wasn't looking for it to be 50¢ or anything.  Honestly, two bucks was a pretty good price for them to get for a Christmas tree in March. 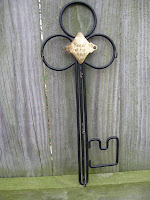 More Christmas, the Key Keeper and a happy find of three nesting nice - the biggest one is about as big as a golf ball.  They were in the original plastic bag and all dirty so I didn't really even realize what they were, but I threw them in the box "in case".   Lovin' that vintage pink and aqua tinsel. 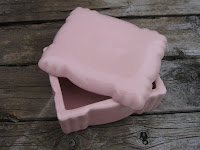 Saturday I went to the Estate Sale that I wrote about earlier in the week.  It was pretty low by the time I got there, and it was all nice new up-end stuff.  I did look around and find a couple items.  This lovely matte white Hull planter was only a quarter!  I was happy to spot it amongst the newer stuff on a table in the garage.  I believe I whined about not finding any pottery lately and now I have found two pieces in three days.  Oh, Thrifting Gods, thank you.  And, for the record, I haven't found any $100 dollar bills or winning lottery tickets either.  (Hey, it can't hurt to mention it!).  The pink pottery box matches a white one I already have in my pottery collection.
My favorite item of the day: 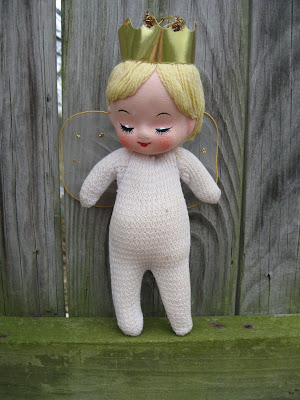 This incredibly adorable angel.  Oh my heavens, she is so adorable.  I love the fact that she looks like she is in her thermal undies.  I feel the need to gussie her up, but then again, I like her as she is.  She's a cutie pie!
I hope you got to dig in some JUNK this weekend!
Posted by Shara at 9:43 PM