***Photos are hopefully working now. I inadvertently posted this post on my other blog (You didn't know I had another blog, now did you?) and when I discovered what I had done, I simply cut and pasted the entire HTML post into a new post, but somehow the photos links didn't jive right or something. If they aren't visible, leave me a comment adn i will try it again. And, Thanks!

Friday morning I was up and ready to go out and set up at 6:45. With our Homeschool schedule, I don't really get up until after that, so I didn't realize it was still pitch dark at that hour. But, by 7:15, the sun was up and I started setting up. 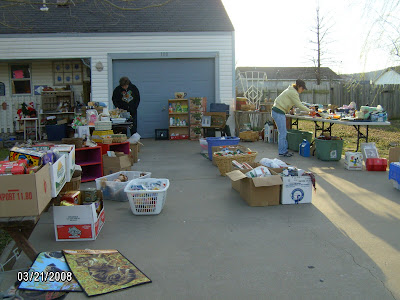 I had my first customer as soon as I opened the garage door to start emptying out boxes. The mood of the customers on Friday was extremely disheartening. Rude, rude old people. Offering me $1.00 for a $5.00 item. I'm a low pricer and if I think it's worth $5.00 at a yard sale, then By Golly, it's worth $5.00. One lady wanted to pay 25 cents for five dollars worht of stuff. Was she kidding? No, she was not.

It was also very windy and things were blowing around and glass was shattering and pottery was chipping and I just got all P.O.'ed and QUIT. I shut it down and put a big nasty note in the driveway "CLOSED UNTIL SATURDAY MORNING".

I decided Saturday that it was a new day with new people. The first guy let me keep 50¢ change. Well, that 50¢ helped my mood and my self esteem so much. I had a much, much better day after that. I bet he would never dream that 50¢ would mean so much to me. People were friendly, having fun and looking for deals. They still wanted to haggle, but instead of an insulting offer, they just wanted 25¢ or 50¢ knocked off the price. That, was do-able. One family spent $45.00 and didn't even haggle one bit. I did, however, knock $5.00 off as that was my biggest sale of the day. I had two big heavy leather end tables from Target that I didn't want to get stuck with and I really didn't want to give them to the Salvation Army for them to sell for $50.00 each. (Tacky, I know). So, when they swooped in on them, I was happy for them and happy for me too. 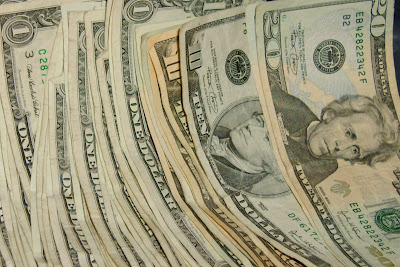 I wound up with $352.00 at the end of the day. I boxed up one small box of things that I had put out thinking they might sell, but knowing I would pull if they didn't. I will try them on ebay or on here soon. I boxed up a lot of stuff and donated it to the Salvation Army today and put some stuff by the road for FREE. I got so much darned entertainment out of watching people dig in those free bins that I should have put it all out there.

So, now I have some money in my pocket and a big empty space in the garage. I made a resolution to cut down on thrifting and not bringing so much STUFF into the house and letting more STUFF go. I will still go thrifting and saling, but I will be pickier and more selective. If I quit bargain hunting, I would literally have nothing else to do except educate my child and organize the house. HA!

Sadly, that resolution ended this afternoon when I purchased 40 pewter Wal-Mart Keychains. 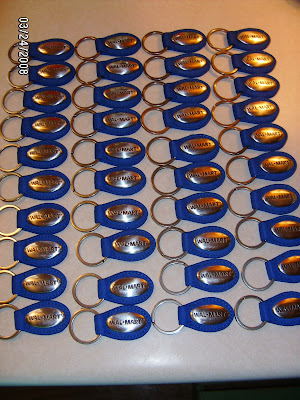 Apparently I have no willpower! I spotted these heavy pewter and leather keychains that say Wal-Mart on them today (at Wal-Mart, of course). They were $5.86, but today they were on sale for 5¢. Yep, a nickle. We go to the Wal-Mart Shareholders Meeting every year and people trade tchotkes for pins from other countries. I think these will makde great trading items and if they don't, a) It's only $2.00 and b) I can send them to you nice folks in swaps and Happy Mail! ;o) 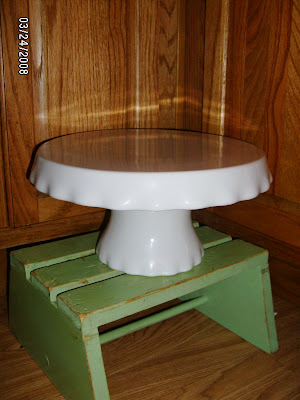 I also got this fabulous cake stand. I have been coveting these on people's blogs. I have never seen one at the thrift or at a yard sale. So, when I spotted this in the after Easter Clearance today for $13.00, I treated myself with some of those greenbacks you saw above.

Back to my decluttering. I am tossing like crazy!
Posted by Shara at 10:05 PM