It has been raining here. Ground washing, flooding the streets rain. Our street was closed yesterday and no one could leave the neighborhood. That was fine for us as The Bean and I were safe at home, but The Breadman was out and about delivering that bread to the hungry folks. Luckily, the city worked on the creeks and culverts and got the water flowing again and the street opened once again before his arrival. 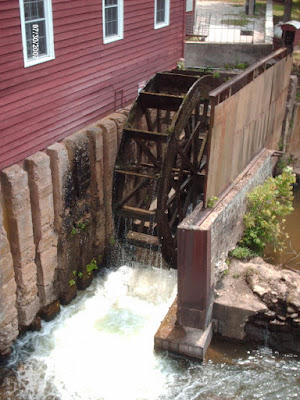 You might remember these photos from last summer. It has rained so much that this entire water wheel is completely underwater. The water is up to the second story windows. It is such a fabulous place - I do hope it isn't damaged beyond repair. 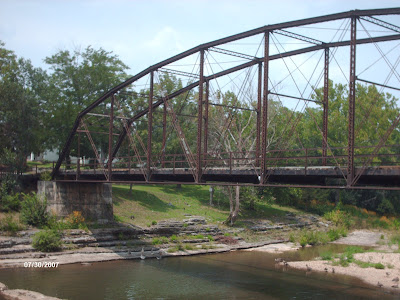 This bridge runs by the Mill. The water is within a foot of the bottom of the bridge now. On the news they showed people walking across it! I can barely stand to walk across it on a good day as it shakes and shimmies. Add a gazillion gallons of rain and I am not crosing that death trap.

Despite the wetness, my Yard Sale will go on as scheduled. The rain has stopped now, but the yard is muddy. I will throw everything on the driveway and up on tables and let the diggin' begin. I thought I would have a small sale, but it's going to be a humdinger. I hope to make money, of course, or I wouldn't even bother. But I really hope to just get rid of a ton of stuff. I priced everything, (and cheap too) but I plan on wheelin' and dealin' on Saturday and having a bag sale to boot. I want it gone, baby, gone. It has made me happy to get rid of so many things and see corners of the garage I haven't seen in years!

For instance - I found a bunch of boxes of Easter decorations that I hadn't seen in seven years. (Pathetic, huh?) I was so excited to go through the boxes, but you know what? I ended up seling everything except one large cool bunny and a handful of small vintagey things. I have diferent tastes now than I did years ago. Back then, all I could afford were cheap "Made in Ch*na" decorations and they look cheap to me now. Now I prefer my cheap thrift store/yard sale vintage goodies. Most of my thrift store goodies cost less than the cheapy items that I had, but are worth more and more very year! (As if I would sell any of them!!!)

So, out with the new and in with the old.

PS. The doll parts sold and I have interested people on the aprons, but everything else is still available.
Posted by Shara at 9:12 PM