Ooops, I Did It Again

No, not like Brittany Spears.
I went to Oops again. Oops is a freight salvage store in a nearby town. They have tons of home interior items, salvaged groceries, tool and a messload of candles. Hanna's Candles are made here and are the very same ones sold by Valarie Parr Hill on QVC. The mistakes go to Oops for salvage sale. Today I saw big blueberry cake candles - the ones actually shaped like a cake about 10" across with wax berries for decorations. Looked just like the real thing - Yum-O. I saw them being hawked on QVC for $24.95 not too long ago. Today, they were a mere $3.75. And, just because they are deemed mistakes doesn't mean they are ugly or damaged, just maybe the wicks aren't the same length or the color blue was a bit off from the rest of them. There are some real deals to be found at Oops.

Today I was amazed that they had reset the entire store and gotten in a ton of new home items. Such cool stuff. I showed restraint, but could have gone bonkers if I had a big old honkin' house to fill and not my little crammed to the gills house.
I thought of my blog buddies often as I shopped. Literally, some of you would have died to see the things they had and the prices that they were selling them! Ack! 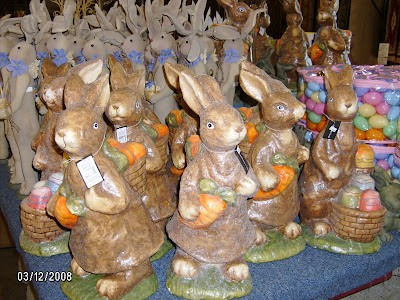 Right inside the door they had a huge table chock full of glittery Easter Goodness. These bunnies were about 18"tall and only........$6.75. 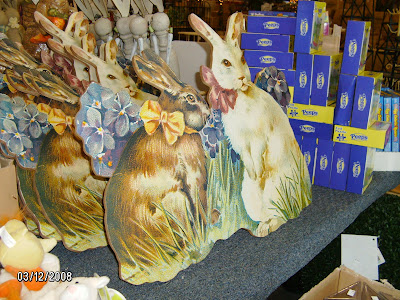 These bunnies were oh, so very vintagey inspried. They were mounted on chipboard with an easel back for displaying. They were quite large and I really wnated them. But, I showed retraint. They were $8.75. 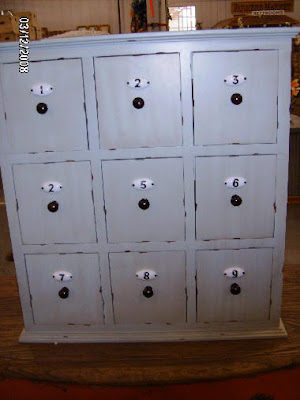 I loved this cabinet. Loooooved it. It was sort of a pale robin's egg blue and all chippy and grubby looking. The cabinet was heavy as lead and very well made even though it was a new reproduction, it really had the "look". The numbers were on porcelain plates and the knobs were cast iron. I left it there too, even though it made me sad to do so. I wanted to put ribbons in drawer #1, buttons in drawer #2 and Vanilla Tootsie rolls in drawer #3. ;o) Oh yes, how much you ask? $41.25. It had a $200.00 price tag on the backside. I know! 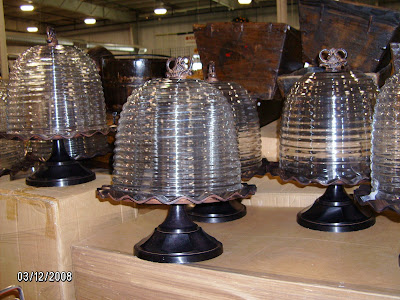 How about these beehive cloche? Cloches? Chochie? Whatever. I digress. These were to die for. Large heavy beehive cloche on top of the cast iron base. Ready? Sitting down? $16.25. 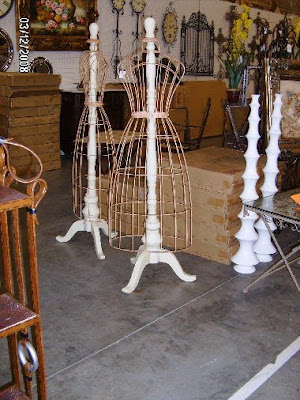 And these dress forms! They were 5 foot tall and heavy as all get out. The dress was made of heavy iron wire. These were $31.25. I pictured them on the "Trash to Treasure" segment on "Decorating Cents" on HGTV. I think they would make primo lamps. 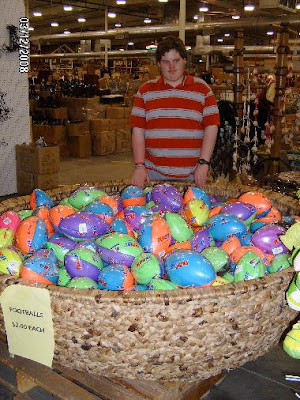 And, this wasn't for sale, but check out that basket. That is a bakset chock full of actual regulation sized footballs. Hundreds of them. Oh, I want an Easter bakset like that! Sans footballs, of course. Before I had The Bean stand there, it looked like a basket full of eggs.

So, what did I buy you may be asking? Well, I showed restraint and only bought things that were small and that I can use in projects. 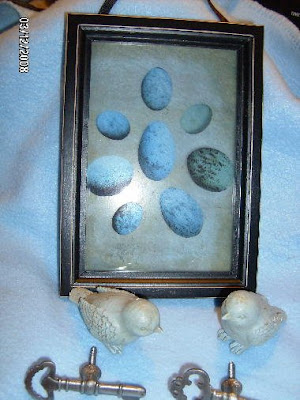 This painting of Robin's eggs is printed on glass. That's the blue blanket you see through the glass and not the background. It's in a black wooden frame with a black ribbon for framing. It was $1.80 and it just looked like a high class Springy thing to me. 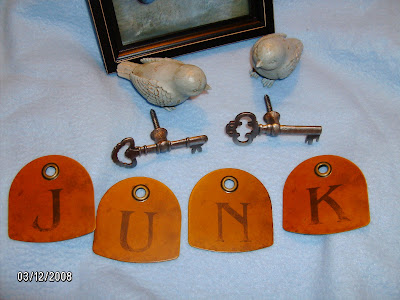 These sweet little birds were $1.80 each, the metal key knobs were 65¢ each and the J-U-N-K letters were 65¢ each too. The JUNK letters are printed on old rusty sheet metal with the grommet holes at the top. They were hanging on a fabulous wooden rack that said "Alphabet Letters" on it. I asked if they had an new entire rack in the back full of letters so I could buy it, but this was the last rack. Dad Gummit! I knew I could have sold the letters to my dear blog readers and kept some choice ones for myself. As for the rack on the floor, they were sold out of "S" which is pretty important for both my first and last name. They were out of a few other important letters like "A" and "E". I tried to no avail to think of something to spell out. Something, anything, in these fabulous rusty old letters, but just couldn't think of a thing. I considered "MOM", but that isn't really me. Even though it is me, you know? Then, as I stood in the check out line, it came to me, like all good junk comes to me - J-U-N-K - I could spell JUNK! I whipped the cart out of line and literally ran back to the rack, much to the dismay of the old DH. 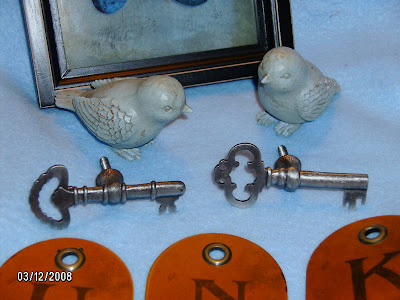 Close up of the cute birds and fabulous keys. The keys will go on an old cabinet I have in the living room that has been knob-less for three years. They were the last two keys in the whole place or I would have bought a sackfull. Too cool to leave behind! 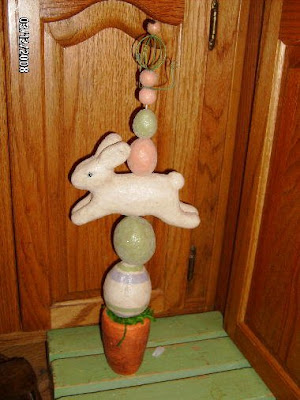 And, yes, one piece of glittery Eastery Goodness came home with me too. A glittery Easter-y Bunny and Egg Topiary. Everybunny needs one! Especially at only $3.75.

Tomorrow I'll be back with some thrifty finds and some "Good Eats".