I went Junkin' today. I mean really junkin'. Not to the flea market junkin' or yard sale junkin' or thrift store junkin' or even trash pile junkin'. All those things are way more high class and socially accpetable than what I pulled off today. I went down in the woods digging in an abandoned junk pile by the side of the river junkin'. Junkin' Ozark Style!

The Bean and I took my Mom for a ride out to see the river that we like to frequent. Next to the river there is a winding dirt road that leads back into town and is much more adventuresome than the blacktop that we took to get there initially. We went up the big hill driving slow as it is hilly and completely red clay Arkansas dirt and rock.
We were slowly driving along the road when I pointed over the edge of the cliff that the river was running beside the road. When I slowed down to comment about the river, a flash of blue caught my eye in the woods. Now, I'm a junker from way back and I know good junk when I see it. Enamelware! **Screeeech.** I pulled off to the side of the road and The Bean and I bailed out of the car careening down the hillside to the junk pile leaving my Mom alone in the car to fend off any hillbilly mountain men that might have come along.

I suppose this might be a good time to let you know that once upon a time, people just threw their trash into the hollar behind thier house. They burned what they could and threw the rest in the hollar. (*Hollar - a deep hill that you have to hollar into to find the bottom. That's what it means. Seriously.) So, all these years later, all that remains are the metal and glass items. Old bottles, old cans, metal buckets, enamelware, etc. Treasures if you ask me. Not trash!

Of course, nothing was in perfect condition. It was the junk pile for goodness sake. But, in the eyes of me, the Junkreator everything still had a ton of life left in it. 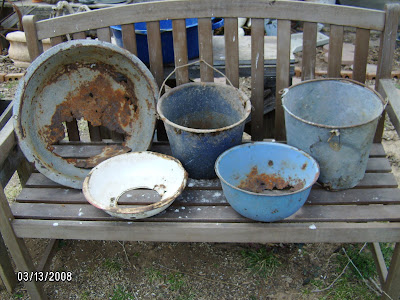 What do you see? Good junk or bad junk? I see a pile of good junk that needs some imagination and a little elbow grease. That blue enamelware bucket in the center still has most of it's bottom and it actually cleaned up pretty good. The white thing is a white washpan with a red rim. The big one on the back left is a gray and white splattered washtub. The bucket on the far right is galvanized steel. No bottom - but it will still hold a flower pot and hang on the fence. And, to think, it was all free. Oh, sure, I was trespasing and might have landed in Jail if I would have been caught, but who cares! Junkin' is good family fun! And, the best part is, I left a thousand things behind, so a return trip before snake/tick weather hits is imperative. I left behind an old wire dish rack from the 1940's that I must return for soon. (I thought The Bean had it, he thought I had it).
~~~~~~~~~~~~~~~~~~~~~
Before the Junkin', I went to the Super Cheap Thrift. It was nearly closing time, but I found a few goodies. While we were paying I overheard a lady talking about a big yard sale in town. She said it wasn't supposed to open until Friday, but they had everything "crammed in boxes and thrown out in the yard and it was very disorganized and you had to dig to find anything." She said it like it was a bad thing. Diggers are the best. I told The Bean to get in the car - we were finding that sale. Goodness, they had the stuff. And it was in boxes and it wasn't very organized and the lady having it could have cared less if she made any money or not. She just wanted it gone. Between the SCT, the digger sale and one other that I stumbled onto I got all these goodies. 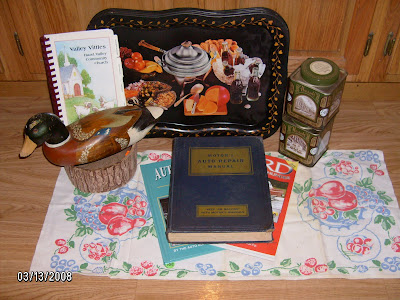 A Community Church Cookbook for 50¢ (that I intended for resell until DH picked it up and said, "That's Grandma's Church" and we found recipes by half his "kinfolk" in it so I suppose it's a keeper now), what I "think" might be an old duck decoy for 75¢, a cool planter that looks and feels like real wood for 55¢, three books - Cars of the 1950's, and Ford Thunderbird Anniversary Book (both brand new and for my Dad who owns an anniversary Thunderbird) and a 1935 Car Repair Book all for 50¢ each, a sweet vintage kitchen towel that has since had an Oxiclean soak and is whiter than white for 50¢ and two tea tins from Harod's in London for 25¢ each. The set of four trays in the back are from Coca-Cola from the 1970's or so. They were in a big box full of old kids TV trays (not cool old, just funky old) for $5.00. I asked if she would sell something out of the box for less than $5.00 and she said yes. I had a total of $5.50 in my head for everything before the trays were added in, but she came up with a figure of $5.25 total, so I guess she was a wheelin' and a dealin'. 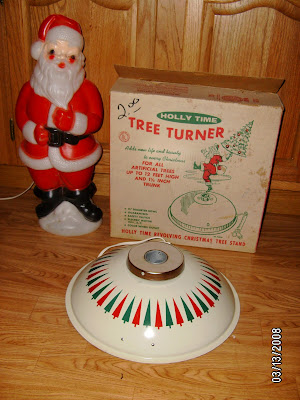 That $5.25 figure included these two pearls. The blow mold is dated 1973 and ws 50¢. The Holly Time Tree Turner is absolute perfection. I couldn't believe it when I spotted it across the yard. I sprinted to get to it. Sprinted! Me! Really! You can see how much it was priced. Why, oh why do peole take Magic Marker to perfctly good vintage packaging????? *Sigh* In case you don't know what the Tree Turner is - you put your Aluminum Tree in it, plug the color wheel into the back and turn it on. The tree then slowly revolves around so you can see all the ornaments. (No more hiding that Macaroni Baby Jesus the kid made in preschool on the backside!). The tree turner had never been used. It is pristine. I am torn. I should sell it, I'm sure it's worth far more than what I paid for it. But, I do have a Aluminum tree in storage. And a color wheel. And cool retro ornaments. But, alas, I have nowhere to display it. I paid $3.00 for my tree, $2.00 for the tree turner and the color wheel was a dumpster score by my Dad. So, I really think I will keep my $5.00 investment and hope that *someday* I will have room for it.
Yea, that's the ticket.