Saturday The Bean, my Mom and I went to a Kite Flying Festival. It is only $1.00 entry fee, so it is a very affordable and fun day for the whole family. It is held in a tiny community called Cane Hill on top of a huge mountain. It is always windy up there. Well, it is windy at ground level, but we are so high up that the air currents above us are very strong. You can really get a kite up high. And, it can be very cold. We were lucky that yesterday was a beautiful 73 degrees. Which is a good thing as there is a forecast of 6 inches of snow on Monday. Eye-yi-yi.... 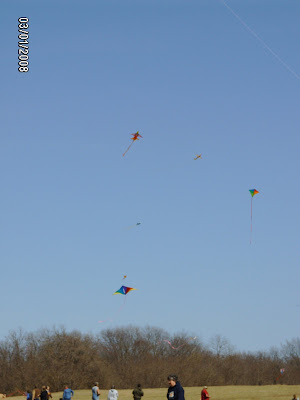 I counted 40 kites at once. There were fancy dragon windsock kites, box kites, cheap kites and every kind in between. I'll let you in on a kite flying secret. Those cheap Diamond Dollar Tree kites are the best kites. Lightweight and they get up very, very high. 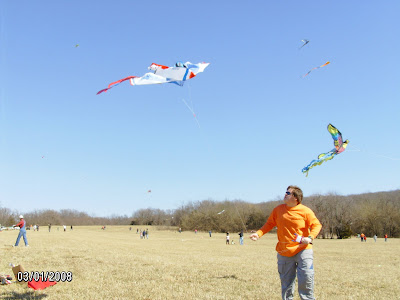 The Bean had bought a $20.00 Air Force One kite and had been holding on to it for over a year waiting for the Kite Festival. Yesterday was the day. He was very excited. Sadly, this is about as high as he ever got it. It just had too much weight to it and he was afraid it would get stuck in a tree or cut loose to float away forever. 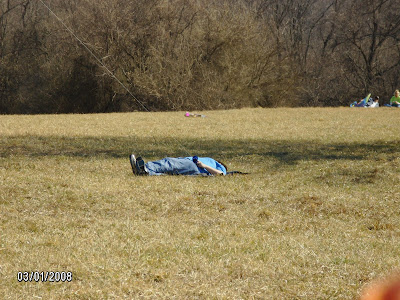 This lady laid down and flew her kite for about an hour. I really don't see the fun in that. And, she kept getting all cranky when The Bean would thunder past her keeping his afloat. How about you get up and let the kids fly their kites, Ms. Krankee? The Bean had his plastic Dollar Store kite go out the entire 900 feet on his spool. It was so far out that no one could see it on the field. And then a few people saw it, but couldn't figure out who was flying it. As the event wore down and people started to leave, one of the organizers came walking towards us. We started reeling in the kite and hurrying, assuring her that we were leaving soon. "On no!" she said. "You win the prize for last kite in the sky!" And she handed him a $5.00 Wal-Mart Giftcard. We're always the last ones to leave any crowded event. It's about damn time we were awarded for it.

Today we had a bit of a kite emergency at the house. The Bean was taking the kite out of the car and it was a really windy day today and *whoosh* it was in the air lickety split. He caught the spool and had it up pretty high when it slammed into the tree. Not good. This might be a good time to mention that The Bean is very sentimental and loves all his belongings. (Hmmm where'd he get that?) Leaving his kite in the tree was not an option. This might also be a good opportunity to say that DH is really not very coordinated and often hurts himself doing strenuous things like tying his shoes (pulled his back out of whack) or weedwhacking the yard (sliced the bajeezuz out of his shin). 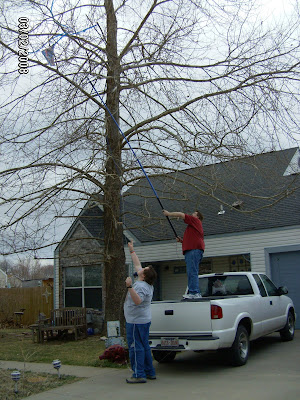 So, when I went in the front yard and found this little scenario, I sort of freaked. Well, I did go get the camera first. Then I freaked. The good news is the kite came down along with a few limbs on the tree and no one got hurt! Yeah! 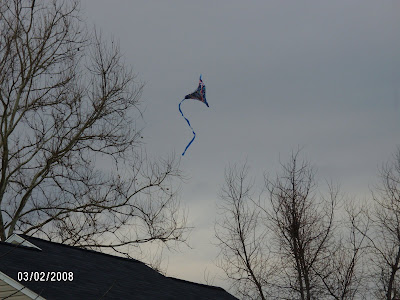 Up again it went. Until it got stuck in three more trees and I demanded that the boys "Come in the house NOW!"

~~~~~~~~~~~~~~~~
Last week we watched The Blue and The Gray which was a mini series about the Civil War made in 1982. It is a true account of the Civil War, but from the perspective of a family and not so much political. It was filmed in our area and I knew a great number of people in it. I hadn't seen it in years, so I thought it would be a good movie for The Bean to watch. After we watched one DVD (It's 6.5 hours long) we went out and found the area where the movie was shot. The movie was shot in entirety at the Prairie Grove Battlefield Park that we frequent. We could see all the building that we know so well and the battlefield below. Now that we've seen the movie and visited the location and studied the Civil War, we are going to write a report all about it. Real vs. Movie, Fact vs. Fiction, etc.

First we found the dirt road where they showed the Yankees marching towards the battlefield. The dirt road lead to this bridge. 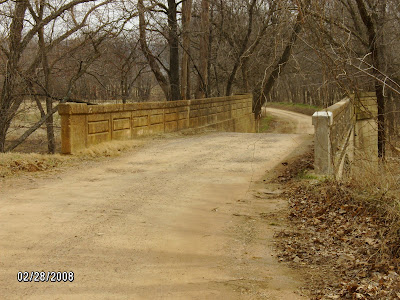 It's funny, we drive within 1/4 of a mile of this bridge several times a week and we never knew it even existed. In fact, it's not more than 1/2mile from the Super Cheap Thrift!) Who knew!
There were clips of the Yankees crosing the river shot here. 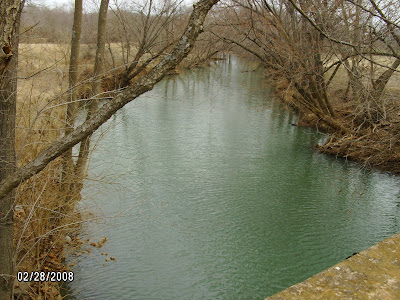 Here's The Bean recreating the Marching Scene over the bridge. Lord, he's a good sport! 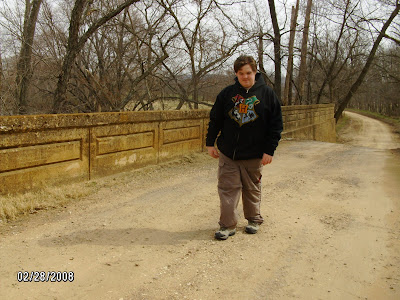 The Bean looking over the bridge over the river. 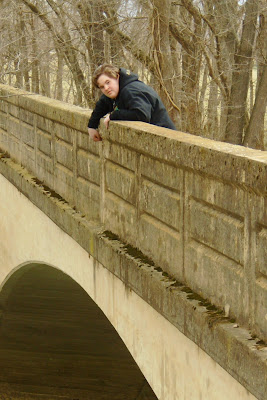 I could show a ton more photos and tell you a lot more about the movie and where it was shot, but unless you just spent six hours watching it like we did, you probably don't care to see all of it. But, we had a fantastic time!
Posted by Shara at 9:11 PM