Well, the weekend anyway.  Saturday morning was chilly but it was sunny and I had the JUNK fever.  There are only a handful of weekends left for good sales, so I feel it is my JOB to hunt them down while the gettin' is good.  I usually just get up and head out and see what I find where I find it.  I like to go to the small town to the West of me where everyone lives in little old houses where they have lived for 50 years and they still price things 10¢.

But, this time I had looked on Craigslist and planned out a route for my first few stops.  First sale on the docket said the had thousands of old wool spools.  Well, that, I had to see.  So, I headed that way.  They did have a lot of old spools in different sizes on a table and then tubs of different colored spools with different colored wool thread on them.  But, I would describe it more as hundreds of spools.  Not thousands.  Unless a dump truck came and bought most of them before I got there.  The big ones like I like were $9.00 each all the way down to $2.00 each for the think little bobbin type spool.  That was cost prohibitive of me buying my own truckload, so I passed on all of them.  I think they are still popular and have might have sold if I could have scored a bunch for cheap.   'Cause I am cheap,  You know. 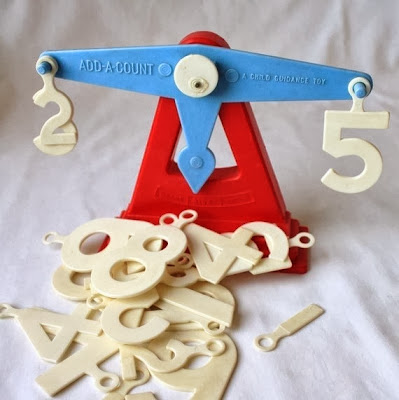 (Photo borrowed from the Internet because I forgot to take a photo....)
All I had found was a 1942 copy of "Fortune Telling for Fun and Popularity" for 50¢ so I was about to pay and leave.  That's when I spotted a vintage Add-A-Count Math Scale on the table.  I remembered that Eddie had found one of these earlier this year and I was enamored by it.  Who doesn't love red and aqua and numbers?  Forget that it is about MATH.  It is cool!  :)  It wasn't pried so when I asked about it, the lady at the sale told me it was $1.00.  Then she pointed under the table where there was a big box FULL of them.  It was about that time that the man of the house started telling people how he was ready to go in and he would about give stuff away just to get rid of it.  So I took that as my opportunity to ask, "How much for all the scales?"  The price was a winner, so I grabbed the box and took them all.  There were 25 in all, but seven of the scales were broken.  So, I ended up with 18 complete scales and a pile of extra numbers for crafting.  I think they are kitschy, don't you?

After that sale, I headed to a sale not to far away that was on "Munchkin Lane."  Now, who wouldn't go to a yard sale on Munchkin Lane, I ask you?  I got there a little after ten and they greeted me at the end of the driveway asking what I was specifically looking for at the sale.  When I said I just like to prowl around (my standard answer to that annoying question), they said that they were taking it all to Goodwill because the were closing up.  It was 10:00 am!  Who closes down at 10:00 am?  Geez, at least take down your sign and then start boxing it all up.  When I pulled away about five cars were arriving and I just laughed and laughed.

I stopped at a few more sales, but didn't really find much  - I did find some new unopened packages of postcards, labels, printer paper, stickers and photo paper for 25¢ each.  I love finding things like that for cheap.  I can always use it somehow.

I decided to circle back to my sweet little old lady town, hit the Super Cheap Thrift and go to one sale that advertised Vintage Christmas.  I hit the SCT first, found a little Energy Chime which you strike with a mallet and it rings forever.  I love it.  The cats hate it.  I bought one other thing for 50¢, but cannot for the life of me recall what it was right now.  Hmmmm.....

On to the Vintage Christmas sale.  I spotted a table full of little things when I walked up.  Not anything that great, but it was all old and kitschy.  I asked how much things were since none of it was priced.  She quoted me ten dollars for everything on the table.  Since I didn't want every single thing, I started picking up a few things.  As I gathered things up, her prices were getting near the "whole table" offer, so I just stopped and told her I would take it all after all. 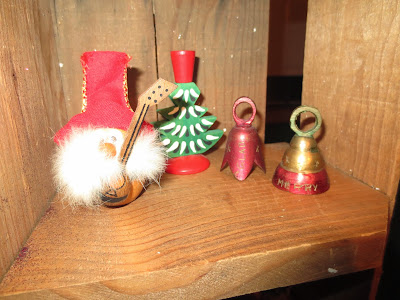 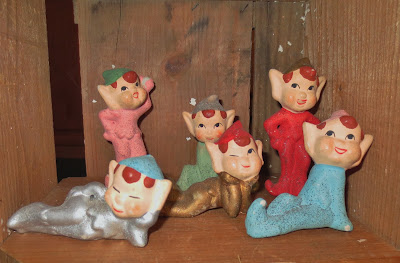 Six little pixies with glittery exteriors.  I didn't think the were old at first, but once I picked them up and saw JAPAN on the bottom, I knew they were vintage. 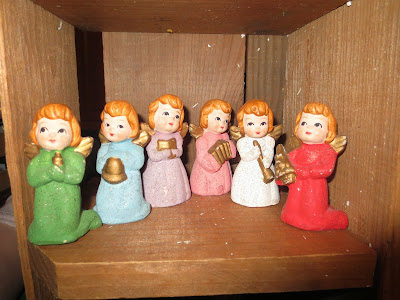 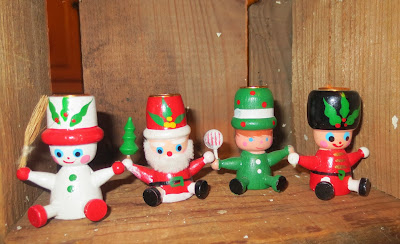 Made in Sweden Candleholders. 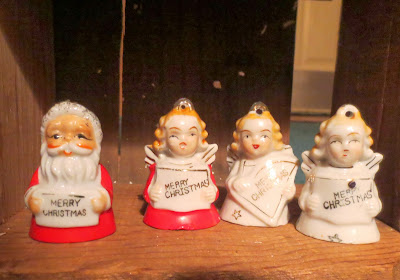 Four little porcelain bells.  The three angles gets a bit more strange in the face the farther over you go.  The last one reminds me a bit of one of the Three Stooges. 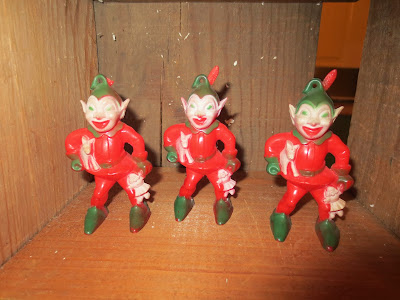 Now, let's discuss these "elves" for a minute.
I say they are the spawn of the devil.
What do you say? 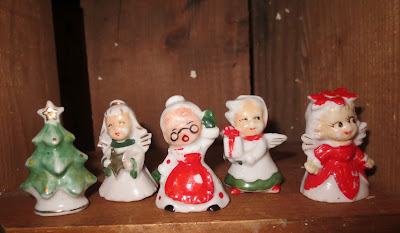 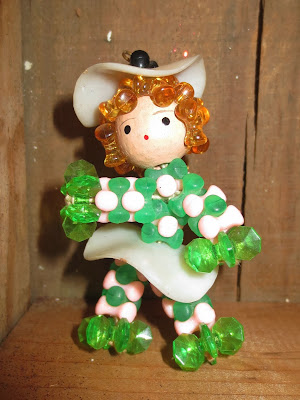 I am not usually a fan of this sort of craft. But,her little glued on bead curls make her a winner in my book. 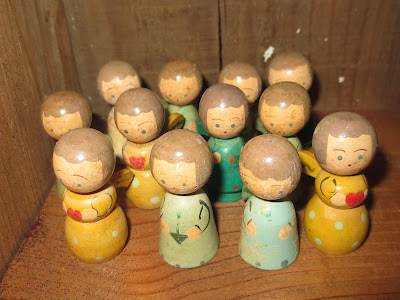 This assortment of tiny angels are just adorable. 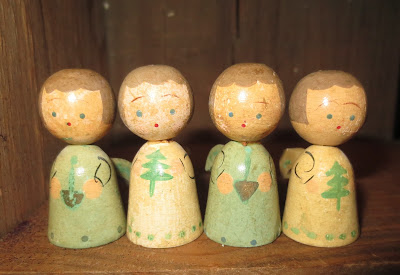 I love their little chippy faces and their pouty expressions. 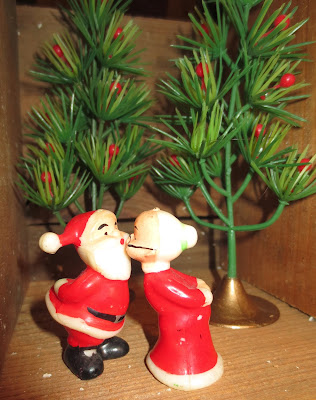 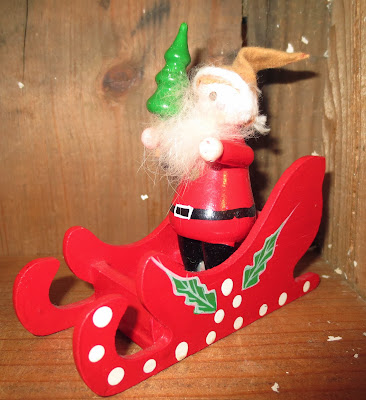 Santa in a sleigh. 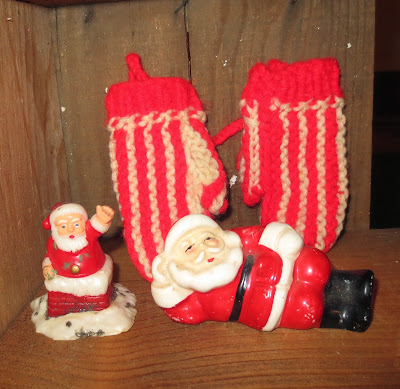 Demented "thumbs up" Santa in a chimney, sexy "come hither" Santa and a sweet pair of mittens. 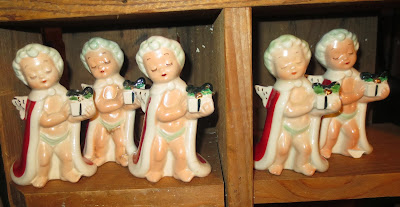 And, last but not least, five vintage cherub slash angels that appear to be in their undies. 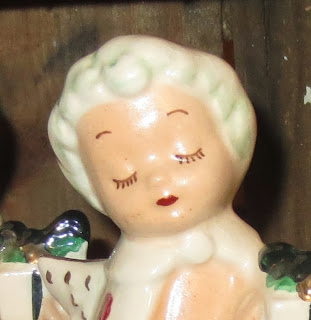 They do have really sweet faces though.  It almost makes me forget they are in their undies.

As I was leaving, I spotted another box for $5.00 that was full to the brim of Christmas tree ornaments.  I bought it site unseen and took it home.  It was full of probably 150 ornaments, some as small as one inch tall and every.single.one of those ornaments was wrapped up in a paper napkin.  Every.single.one.  I do not who had the time to wrap each one up individually like that.  Or why in heavens name they did it in the first place. Not one of then was glass.  Most of them went straight to Goodwill, but I did keep a lot for my wreaths.

I guess I did okay after all what with all the vintage Christmas and those fun Add-a-count scales.  But, next weekend, I think I will just follow my hunches and go my favorite direction as usual.

Did you go junking this weekend?
Posted by Shara at 11:47 PM