A Thrifting Tri-fecta Plus One

Today I felt a certain thrift store calling to me.  I didn't have plans to go anywhere, but then again, I didn't really have anything else pressing to do - so I decided to make a quick dash.  You just can't ignore when you get that feeling.  There's something there -  you just have to find it!

On the way there, I stopped at a yard sale that I go to a couple times a year.  They never have a lot that interests me, but they are good country folk and nice and have low prices.  So, I usually go.  I once bought a $4.00 Longaberger Basket that I sold on ebay for a Buy It Now of $104.00 FOUR MINUTES after I listed it.  My fastest sale ever!  Of course, whenever I see that yard sale, I remember that and have to stop and see if they have any more Longaberger baskets......they never do....:)

Among the newer knick knacks and the piles upon piles of fishing items, I found one thing to buy. 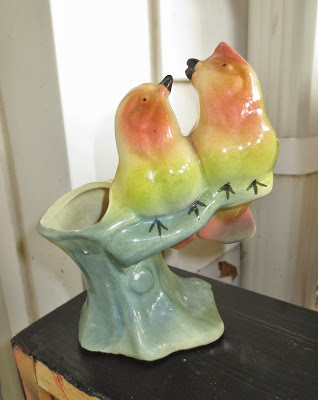 This sweet old piece of pottery fit my bill of things worth buying.  It was $1.00.

As I went to pay, the lady said, "Did you go in the Christmas shed?"  THE WHAT?  She pointed to a shed with a propped open door and told me it was all full of Christmas.  I could barely keep my knees strong enough to get there, I just KNEW it was going to be a kitschy vintage dime store mercury glass Shiny Brite rubber faced Santa spun head angel nirvana. 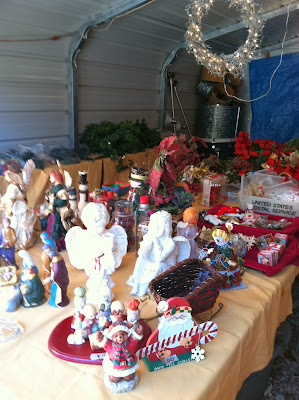 It wasn't.
Not one single thing to buy in there.  It was all new and just not my kind of thing.  At all.
Booooo. 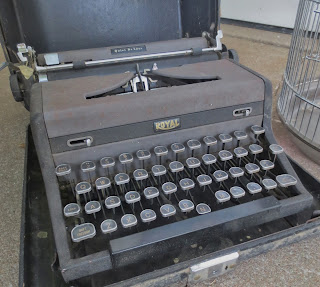 When I was shopping I did notice an old Royal Glass keyed typewriter sitting on a table but it wasn't priced.  As I was leaving, I heard myself ask, "How much is the typewriter?"  Then I started hearing "Oh, what would you pay for it?" and "That's an antique" and "I'll have to ask Mama".   I kept on heading towards the car when the lady yelled into the house at her Mama - "How much for that old antique typewriter?"  and she said, "Ten dollars."  That wasn't a bad price for a glass keyed typewriter, but since I already own three *cough typewriter hoarder cough*, I didn't need another one.  But, then the man yelled at me - "Give me five bucks and get it out of here!"  I told him Mama wasn't going to be happy and he said, "Mama doesn't need to know..."  So, as you can see, I bought the darn thing.  The case was super beat up and really filthy.  I looked at the typewriter and it was dirty too - some keys were stuck, there was some sort of a paint over spray on it and it kind of smelled weird.

So, I did what I have always SWORN I would never do. 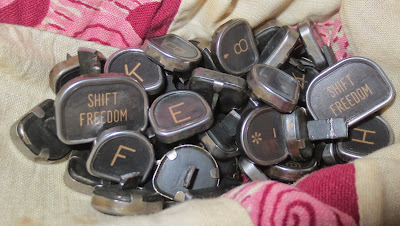 I cut off the keys.  I CAN"T BELIEVE I DID IT! I am SO against taking apart old typewriters.  But, I think I did the right thing since it was in bad shape.  At least I saved the keys, is how I will look at it.  I will use them in some jewelry projects.  Do you know they call that "raping a typewriter"?  That's why I have never been able to do it.  (Those tin snips I scored a couple of weeks ago for 50¢ did the trick!) 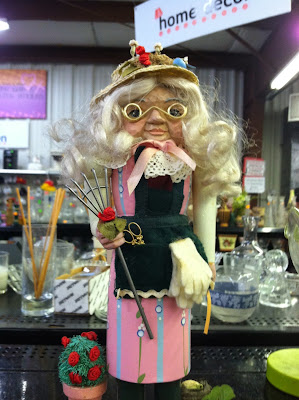 On to the thrift store where I saw this scary ass nutcracker.  There is just something about her head that freaked me OUT. 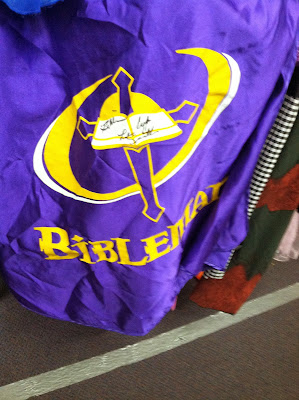 Also this cape to be Bibleman.  I don't know- this was weird to me too. 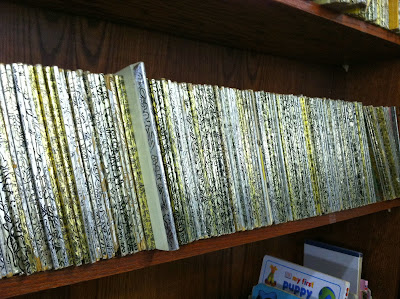 And someone had donated hundreds of Little Golden Books.  There were multiple copies of every book and the were all used and read.  I don't know where they got so many though.  They all had UPC's so they weren't old copies, so I passed.

This thrift has a revolving color coded system that changes every week.  The have these huge signs on the wall in front of the store, but because of the way the store is laid out (and the fact that I am short), I can't  see the color chart once I get past the second aisle.  The reason I am telling you this is because today I had THE BEST IDEA EVER!!!!!! 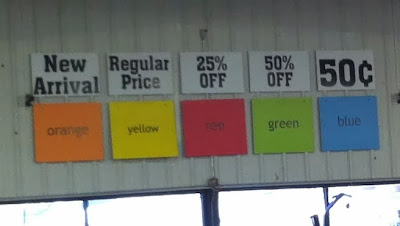 I took a picture of the signs so I could refer back to it while I shopped.  I know it is an idea that I should have had ages ago and you probably already do this - but I was pleased as punch at myself for figuring it out.   You would think I could remember the colors and percentages while I shop.  But, you would be wrong. 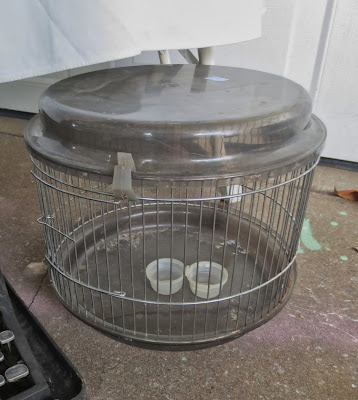 I bought this bird cage which had reached the end of it's time at this particular thrift and was in the 50¢ color code.  I know I saw some sort of a project using an old round bird cage somewhere, but I honestly don't remember where I saw it or even what the project was - but by GEORGE, I have the birdcage now for if and when I ever find that darned project again.  And, if I don't - well, I'll just get a bird!  (Not.) 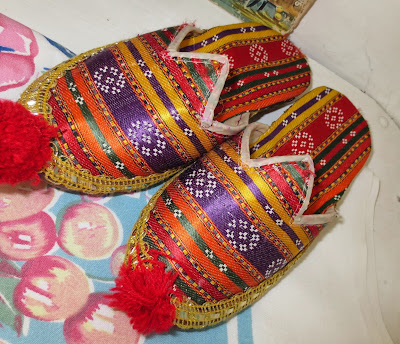 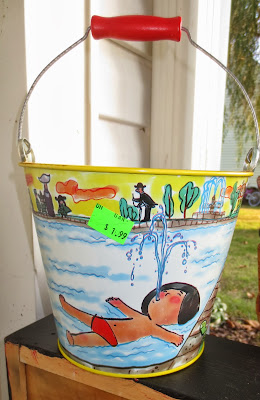 Three old books for 50¢ each.  Such cute graphics in these old books.
These will go in the collection that I have apparently started for my grandchildren.
*sob* 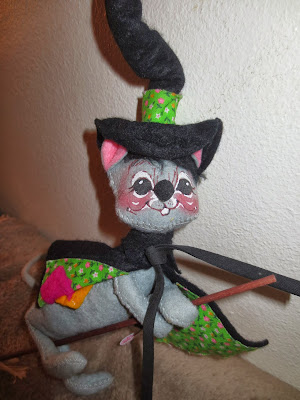 An Annalee witch!
I think this is what was calling me as it was the first thing I found and one of the things I always WANT to find.  Shes fits right in with my Halloween decor. 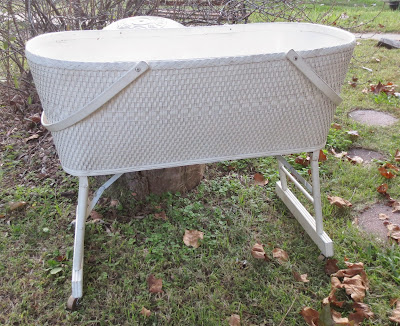 I want to use it to display linens, quilts or pillows when I do sales. 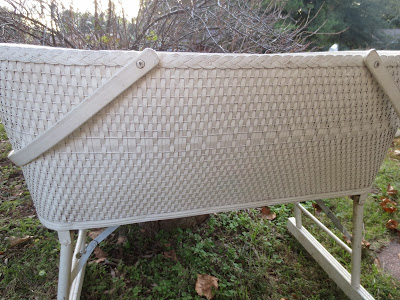 It's in such nice shape.  Usually they are all warped from being in the attic or have holes in them. 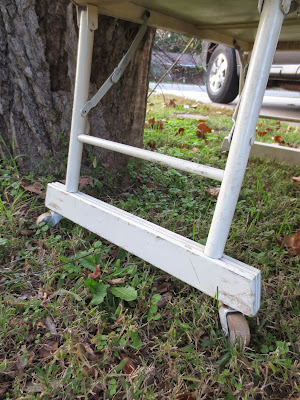 This one even has wooden legs and wooden wheels, so I know it's old.  I had one before, but it had plastic legs and wheels.  I think it will be great as a display piece.

On the way home I stopped at a different thrift that I have only been to a couple of times.  I used to go, but they moved and I don't like it much anymore.  But, today I felt the urge to stop. 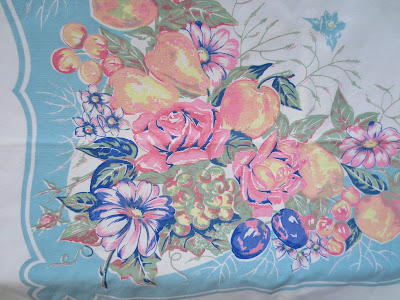 I knew why as soon as I spotted the beautiful vintage tablecloth peeking out of the linens. 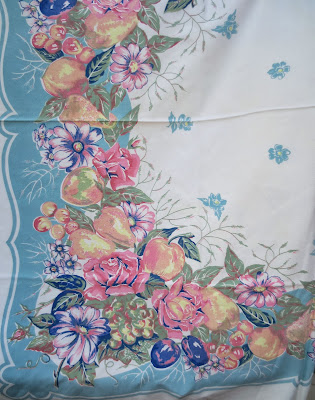 It's absolutely gorgeous and it is perfect.  A shining jewel in my tablecloth collection.  It was at the high end of my tablecloth pricing - $4.00.  Yes, I am cheap.  But, I usually do find them for a dollar or two.  This one is a beaut, so I had no problem paying the $4.00.

Pottery, a basket and a tablecloth - that's my thrifting tri-fecta.  Throw in an Annalee doll and I just had the best thrifting day EVER!