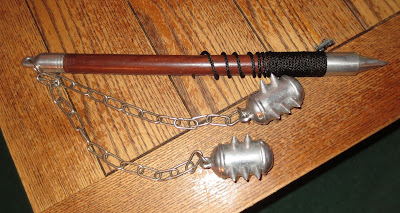 Today while out thrifting, The Bean purchased this deadly weapon, a Mace.  Question.  Who would donate a WEAPON to the thrift?  Weird, right?  He collects things like knives and swords but he just looks at them.  They are not weapons in his hands.  He likes historical weapons.  He also bought a Rated "M" Video game.  I asked him if he wanted me to swing through the Liquor Store for some beer and cigarettes to complete his day.  He declined.  ;)

I found a few items today and a couple over the past week.  No garage sales for me since I have been busy and really, it is just too darn HOT to go.  It was  101 today.  Boo. Hiss. 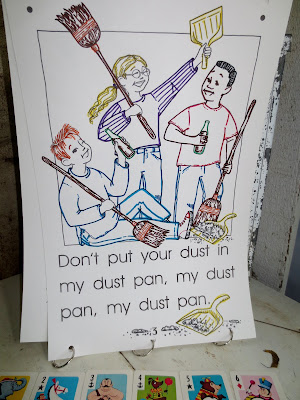 "Don't put your dust in my dust pan, my dust pan, my dust pan."  Catchy, right?  At the thrift I went to today, orange tags were 25¢.  The clerk had just gone down one aisle gathering up all the orange tags and she let me dig in her cart.  I can across a bundle of school posters including this Dust Pan poster.  There are few about Pop Bottles that were cute too.  Good fodder for the Barn Sale. 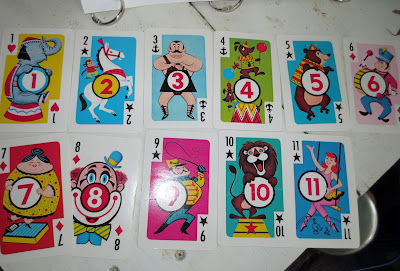 A deck of old Crazy 8 cards with fun graphics. 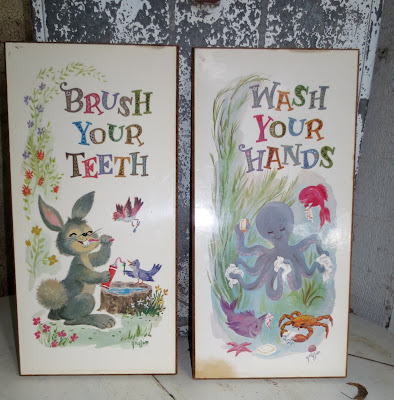 I found these two plaques at Goodwill yesterday.  They will go to the Booth.    Goodwill had done a complete rearrange this week and I HATE it.  I love blowing in and out of a thrift quickly when I know the layout.  They did have about a twenty foot layout of bric-a-brac as they call it.  Now they have moved it and condensed it down to four feet.  The laundry hampers are were the kitchen stuff was and the holiday stuff moved and I don't like it one bit.  I know that once I get used to it, they will move it all around again.  I don't know why they don't call me personally and ask permission first.  You'd think I was kidding, right? 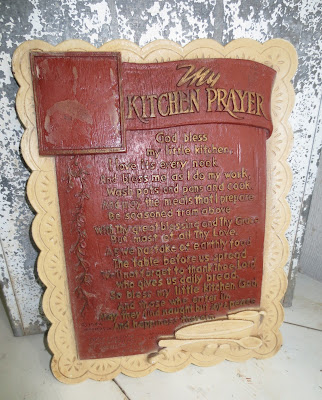 This old Kitchen Prayer plaque isn't something I would normally pick up, but it was only 50¢ and it has a date of 1944 on it.  I'm not sure what used to be in the upper corner, but I need to disguise it somehow. 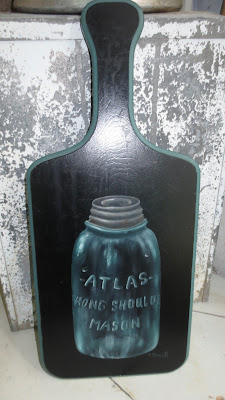 Someone painted up this old cutting board with an Atlas mason jar.  Now, I'm not  a fan of tole painting or the Country look, but this looked pretty modern to me.  And, by modern, I mean Pinterest-y modern. 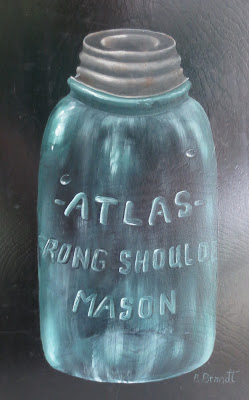 Pretty awesome representation of a Mason Jar, don't you think?  I've been making some glass tile pendants with blue Ball jars on them. 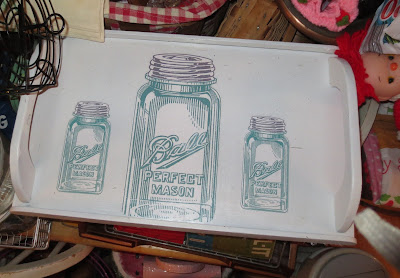 And, I decoupaged this serving tray the other day.  'Scuse that crap around it.  It's in my "stash" and I was just too lazy to move it out for a professional photo shoot. 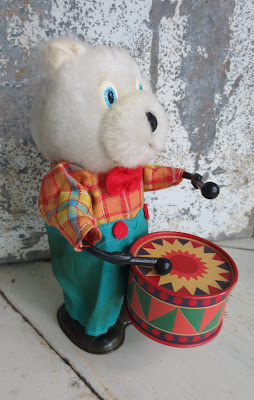 This funny wind up teddy bear plays his drum at an alarming speed and is quite annoying.  I did not know that, however, when I made the decision to buy him at Goodwill.  He's pretty cute though.  He's not new, but not that old either. 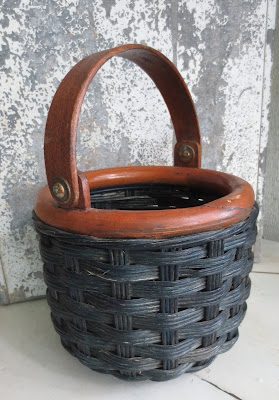 This little basket is marked Dansk on the bottom.  I thought Dansk stuff was worth money, so I went ahead and grabbed it.  It's not the usual Dansk things, so who knows. 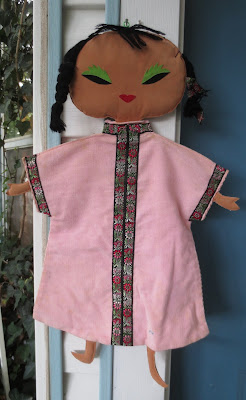 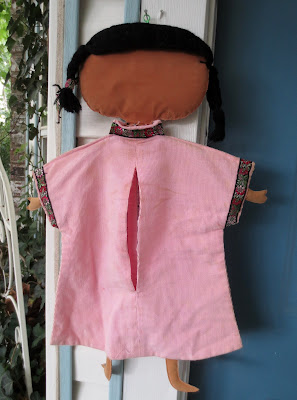 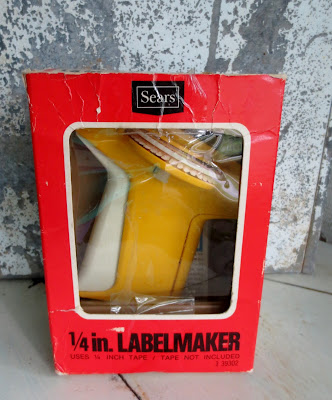 A new old never used label-maker.  Scrapbookers like these, I think.  It's sort of cool.  I have a bunch of the tape that goes in it, so I  might use it to make signs or tags. 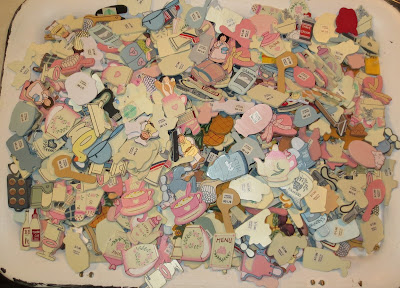 For weeks, I have looked at this huge bag of wooden cutouts.  They are kind of country and kind of dated, but then again, plenty of people still like that look.  There are hundreds and hundreds of cutouts.  Each one is marked 2/$1.00 at Hobby Lobby.  I had seen them in the toy department for weeks, but they were priced too high.  Today they hit the magic 25¢ price, so I grabbed them. 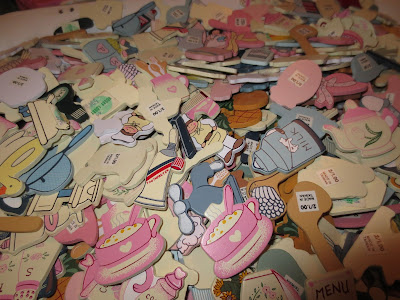 So many people out in blogland find the most darling vintage tin stoves and kitchen items.  I have found a few items like that, but where I live you are more likely to find the sort of stoves that people actually used. 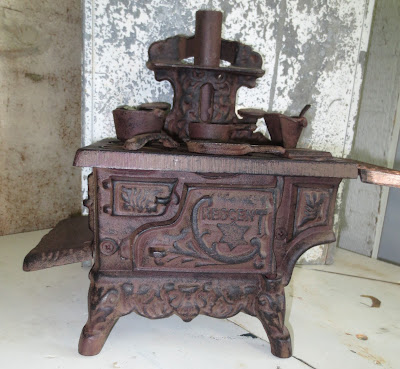 I grabbed this sweet cast iron stove right as the clerk sat it on the shelf today.  It's a reproduction, but still older. 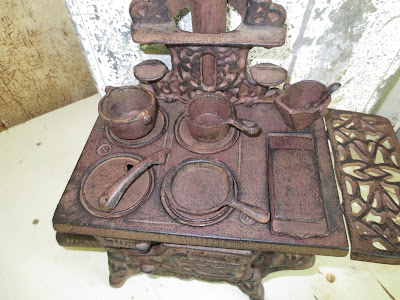 I think it came with everything except the muffin tin.  I'm not sure what I will do with it.  I kind of like it right now, so it's on a shelf in the living room.

Lots of sales in the paper this weekend as usual.  I might go to an Estate Sale that some friends are running.  But, family matters are pressing and that's what's still the most important.  Junk can wait - family can't!