Junkin' With The Joneses

Wednesday I dropped the boys off at the movies (to see Pacific Rim - totally NOT my kind of movie) and I met my Dad for a couple of hours of thrifting.  First stop was the thrift where I found the fabulous tin dollhouse a couple weeks ago.  It is a Church run thrift - but the church is one of those mega churches with three huge local campuses.  They get a lot of new and upscale items there, so it is really not my favorite thrift.  but, lately they have been getting some vintage items in and since they prefer new and shiny over old and dusty, they price the vintage items cheap.  So, now it is one of my favorites IF I am in the area.  We also went to my favorite old lady run Hospital Auxiliary thrift where things are still priced 35¢.  After that, we went to a big thrift where their focus is feeding schoolkids and where they often have Day Old Stone Mill Bakery Bread for free with purchase.  I taught my Dad to go there and buy a 25¢ book to get a free loaf of $8.00 bread.

On the way to meet him, I dropped off a big box of kitchen items that I had culled out earlier in the week.  I smelled a musty smell and discovered some mildew under a drawer.  So, we took out the drawers, sprayed everything with bleach and ran a fan on it for about five days.  Since all the drawers were out, I cleaned out a bunch of weird items and things we had doubles, triples or, I'm afraid to say EIGHT ice cream scoops. 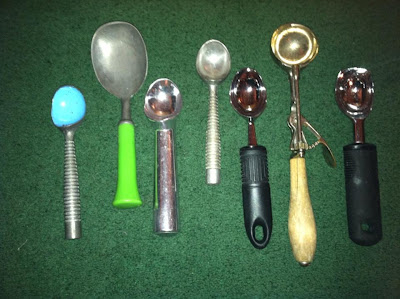 In addition to these seven, we have a big plastic spade that we keep in another drawer most of the time for ice cream scooping.  So, since we have eight ice cream scoops, what do you think I bought at that first thrift? 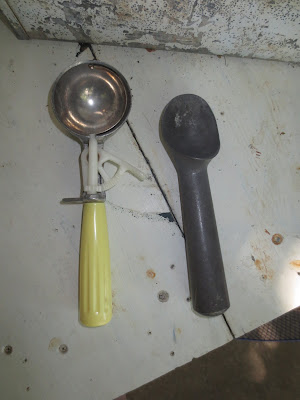 Ba-Bam!  TWO more.  Now we have TEN ice cream scoops.  The one on the right is old, so it might go to the booth.  And, the bigger one will go in the cookie making drawer for scooping my super famous Chocolate Chip Oatmeal Walnut cookies.  Mmmmmmm. 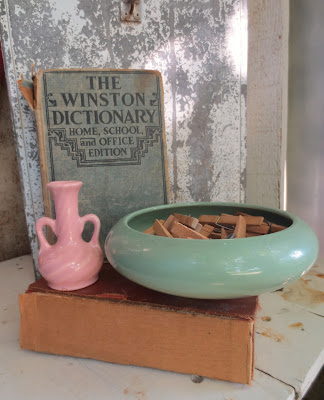 Found the sweet pink pottery at the Hospital thrift for 50¢, two very old dictionaries that, when asked "How much?" the clerk responded, "I should pay YOU to take them!"  but instead charged me 50¢ for both, and a nice piece of jadeite green pottery from the Church thrift for 50¢. 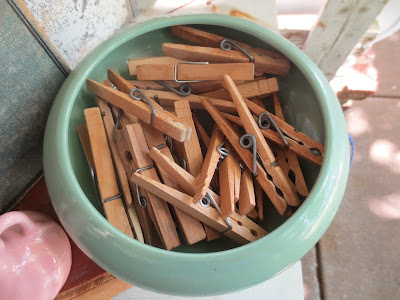 A nice big bag full of old clothespins was 45¢ at the Hospital thrift.  I want to hang baggies of ephemera on those old lampshade skeletons at the Barn Sale. 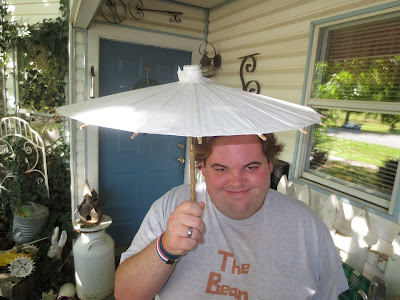 I found two paper parasols at the Day Old Bread Thrift.  One was white and one was pink, but they both had rips in them when I opened them.  I found this little child's sized one on a different aisle and it is in perfect condition.  We like to watch "How's it Made" and we recently saw paper parasols being made.  Not in a factory, but by a group of about five people that make the paper by hand, an soak the reeds, make the frame, apply the paper, coat it with wax, then more paper, etc.  It was really interesting and made me appreciate what I figured was just a Made in China thing.  (I know you think I make The Bean (see his shirt?) do these thing,s but he usually just does things and I happen to have a camera at the ready!) 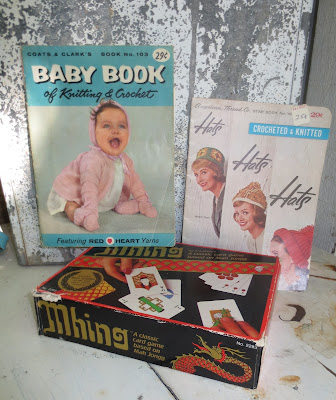 Two old crochet pattern books - one of the most precious baby clothes and one of the most attractive and atrocious hats all in one.  The Mhing game is a card game based on Mah Jong.  The cards looked neat if nothing else. 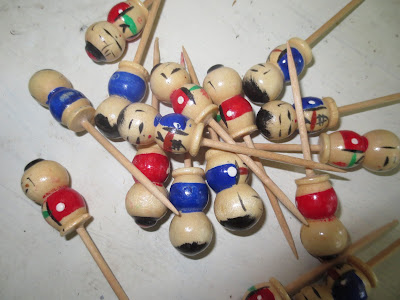 My Dad picked up a plastic baggie and showed it to me, "What the heck are these things?" he asked.  "I squealed and threw them in my basket.  I thought he knew I would love them, he thought they were UGLY and I had lost my mind. 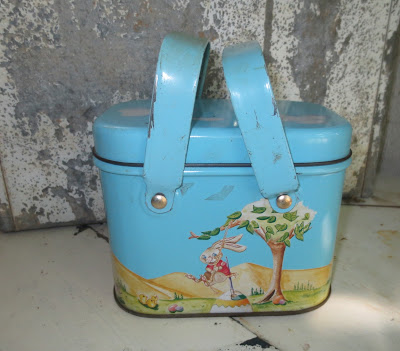 This sweet old tin was from the Church thrift and was 50¢.

My deal of the day occurred at the last stop.  I spotted a shelf full of Reader's Digest Condensed Books. They all had their dust jackets, but I could see the pretty patterned covers peeking out on the top.  There was a sign that said all books were Buy One, Get One Free.  But, there wasn't a price on the RD books.  I asked at the register and she told me they were 25¢, so they would be 2/25¢.  I told her I was going to go back for some more and I headed that way.  My dad said, "I'll wait here while you go get another one."  Silly man.  I went back and got 47 more! 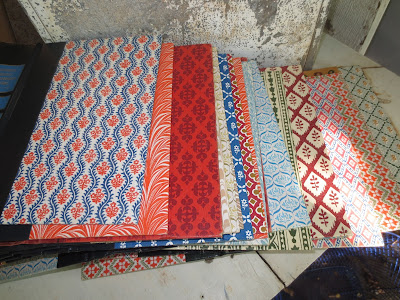 I brought them home, cut the book out and rescued the lovely covers.  The books from the 1960's have the best covers.  Bright and happy. 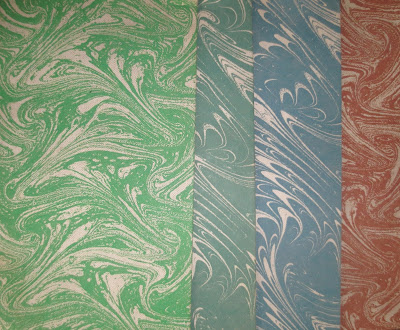 I also realized that some years had themes - like these swirly paint covers are all from the same year. 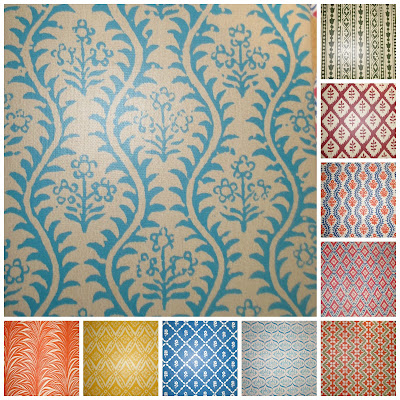 Here's a sampling of my favorites.

When I opened the very first once, there was a nice bookplate on the inside cover and it said, "Mrs. Harvey Jones".  Harvey and Bernice Jones founded Jones Trucking in Springdale, Arkansas.  They lived a frugal, yet nice life, in spite of the fact that they were multi-millionaires.  They left behind land and money to build the Jones Center which is FREE to anyone that "behaves like ladies and gentlemen", Har-Ber Village in Grove, OK which is a outdoor museum of collections, Har-Ber High School, Har-Ber Meadow, Har-Ber Acres, and the list goes on and on.  I went to Jones Elementary School from first to sixth grade.  I met Harvey and Bernice (pronounced Bur-niss) many times.  I went ahead and cut apart all the books, but I kept one from 1965 with her nameplate and signature in it.  A little bit of local celebrity in my own home.

I need to find some more ideas and projects for these covers - I think I have about 100 of them now.  I can only sell so many clipboards!  I tried making the boxes, and it did work, but it wasn't as streamlined and as perfect as I would have liked it to be. I need to try again, but I hate to ruin a lovely old cover!

*I was typing htis up last night when the power went off, so I was scared it would all be GONE.  Thankfully, it was still here this morning - so her goes PUBLISH.  Happy weekend and happy junking to you all!