My stepfather is in the hospital with a bad infection in his foot.  It might have been a spider bite, but not sure. I'm going out to stay with my Mom for awhile since she still had limited mobility and mostly because I enjoy her company.  Hoping and praying that my stepfather is well enough to come home before very long.  Stuff just keeps happening to out little family and it is difficult.  The Bean is a strong young man, but he hates to see his family suffering and sad so he takes it hard himself.  He is a dandy kid, I tell you.

When he was three years old, I took him to the local 4th of July Rodeo parade and I was obsessed with getting his photo in the newspaper.  I dressed him up all patriotic in a big Uncle Sam hat.  We sat on the curb waiting for the parade and suddenly, a man with a big camera appeared and aimed it git at my kid!  Woohoo!  He came over and asked his name and age and then left.  The next day I could hardly WAIT to get the local newspaper.  I looked all through it but he wasn't in there.  I was crushed!  He was certainly the cutest kid at the parade (I know, I know....that's my opinion).  Why wan't he in there?  A little later in the day, someone called to say that he was on the FRONT PAGE of the newspaper from LITTLE ROCK that goes out to the entire STATE.  Holey Toledo, that's BIG! 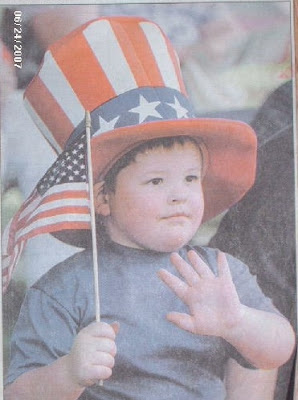 Being the super cool good sport that he is, I talked him into recreating that photo this year. 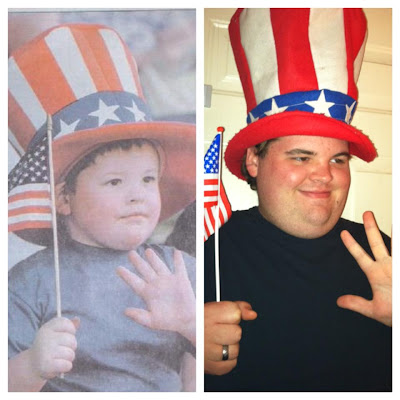 God, I love that kid.