My Dad likes to go to yard sales.  But, he rarely ever buys anything for himself or anything at all for that matter.  Occasionally he will pick up something for me and bring it to me.  He knew about my love of picnic baskets, so he started picking those up for me.  But, they would end up being newer ones with the plastic cups in the lid and matching plates inside.  They were nice and great for a picnic, but not really what I collect.  He isn't computer savvy and has never seen the blog, so he didn't have much to go on.  I appreciate him trying though.

Earlier this week he called to tell me that his neighbor was putting some things out in his yard to sell.  It was on a Monday, so it wasn't really a yard sale.  He was just seeing if anyone would stop and buy something for a little pocket money and fun.  My Dad referred to it as "old junk".  That got me curious.  So, he went back for a second look and gave me a call.  He said he bought a star, a fan and a set of scales for me.  Then last night he called back to say he had picked up a picnic basket and an old milk can.

Today he came to visit and delivered the goods. 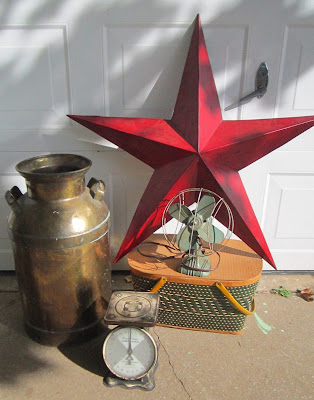 The milk can is brass - marked BUHL Detroit.  I did a little research and found out that it is a brass milk can from Buhl Dairy in Detroit Michigan and is intended for the railroad.  The set of American Family Scales is in great condition.  The old metal blade fan is in great shape and has even been rewired so it's actually useable!  The giant red star is awesome.  It's not old, but I have one of these hanging above my bay window and have been wanting one for the back of the house too.  And, that picnic basket!  Well, that's a Redmon and precisely the ones I LOVE.