Thank You's and Other Stuff

Hi.  I really wanted to thank everyone for the so very nice comments that you have been leaving.  I had already been feeling the love from all the postcards everyone had been sending to me and The Bean.  And, then everything happened here and I got even MORE love from all of you.  I really can feel it and I appreciate it so much.  No one from The "Bread"man's family has even called or left a Facebook message to him.  Kind of breaks my heart.  But, I had him read all the comments on here and all the messages on Facebook and it really helped him feel better.  Yesterday we went grocery shopping at Wal-Mart, which was his first and biggest stop of the day.  For some reason, half the people hadn't put two and two together until they saw him in civilian clothes shopping on a Monday.  The other half came running up and telling him what a great guy he is, asking for his number to pass on to someone that they know, etc.  One guy walked past and simply said, "Hey Breadman".  He said, "Not anymore".  Then the guys face just fell as he figured it out.  Then he said, "You're the hardest working guy I've ever known."  All that meant a lot to him.  So, thank you to everyone.  He signed up for unemployment because he has a right to it and now the job hunt begins.  He has some lines on a few things.  Need to hold out for the right amount of money or close to it - can't afford to take just any job.  But, that's the point of unemployment - it allows you to find the RIGHT job.  He has  a leg in with another bread company, so the Breadman might just remain.  This time with Sara Lee.  Which for me, Shara Lee, that is just plain WEIRD!  He does need a job, but I have told him to relax a bit - it's really only been two days that he hasn't had a job.  He's been sleeping about 12 hours a night, so I know he's exhausted. 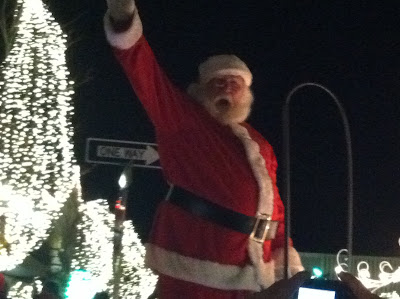 Saturday night we went to see the jolly old elf at our first Christmas parade which got me into the spirit big time!  Tomorrow begins the switching out of regular stuff into full on CHRISTMAS mode.  Woot!  The Breadman has a Razorback game to go to on Friday, so I can get some things done without him following me around.  (Yes, friends, he has only been home four days, but he is beginning to get on my nerves.)  MOney might be a bit tight, but to me, Christmas has never been about presents - it's about decorating the house, Christmas music, baking cookies, being together, etc.  (Oh, I do like presents, but it's just NOT all about the presents.)

I worked at the Flea market today and the Christmas stuff is flying out the door - not only my stuff, but from all the booths.  They told me that one lady came in on Saturday - she drove to that town to come to that store to come to MY booth because she knew I would have vintage Christmas out.  :)  She spent $50.00!  Woot again!  I have a lot in there, but I hope I can keep finding more to put out.  We may be short a job over here, but I still have to get my thrift on!  (It is how I contribute, of course.) 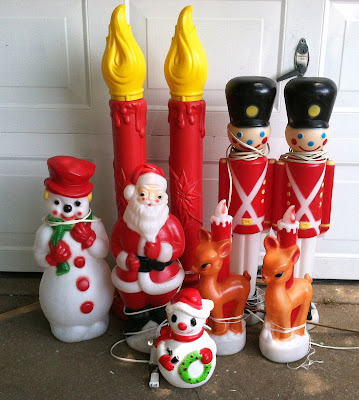 Today I took a load of blowmolds out to the booth.  I bought all of these this summer at one sale.  I had to keep the Snowmen and the Santa, but the rest are out there.  I hope someone else appreciates blowmolds.  I also took two huge wreaths that hung out side JCPenney's.  My Dad bought them when they built a new store.  They are about five feet tall and super nice. 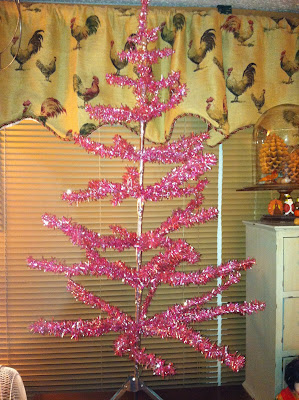 Do you remember my beloved vintage PINK tree?  Well, gulp, I've put it on ebay.  I do love it, but I have never actually worked it into my decorating scheme.  'Tis the season for vintage Christmas items, so I listed it.  I did put a fat Reserve on it, which I really don't like doing.  But, I'm not willing to just give the darn thing away.  It's a beaut and I hope it goes to a good home.  My Mom said, "Stop panicking and stop selling your stuff!"  (This was after a full day of listing on ebay, Etsy, YSJunkies and Craigslist).  But, I'm not.  It's just the ideal time to list a lovely vintage PINK tree.  *Sniff* :)