Christmas at the Flea Market

Want to see a billion pictures of my booth?  Huh, huh, do you, do you?  I have worked on it for two days for a total of about seven hours.  That's a lot of time to stay in one small area working!  I pulled a ton of stuff.  I am getting a feel for what does and for what does NOT sell, so I pulled the dredges.  I have six full totes of items to sort tomorrow (some items coming to my Etsy store...) and then take to a thrift store far, far away.  I cannot stand to see the things I have donated on the shelves.  I feel like a Mom that left her baby on the curb when I see my castoffs sitting there. So, I take big donations to a thrift in the next city where I never go.  That way I can still go to MY thrifts and look for junk without saying, "That was mine, that was mine, that was mine.......".

In the place of what I took out, I brought in a ton of vintage Christmas.  Two carloads, in fact.  I have been pricing it for about two weeks.  After working seven hours, loading in two carloads of Christmas and getting it all set up, the first lady in asked me..."Are you going to be putting any more out?" 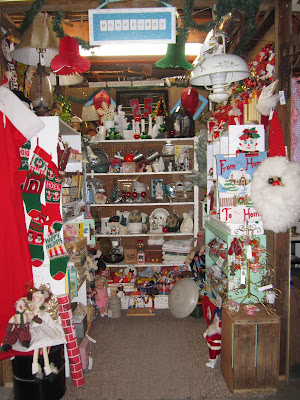 Welcome to Booth #33.  There is a lot in there!  My booth is the only one in the entire flea market that is like a little store - everyone walks into it and does a 360 looking at everything.  I love it like that.  All the other booths - people just walk past while they glance inside.  Of course, most of the booths have big pieces like furniture and home decor and you can see it all when you walk by. 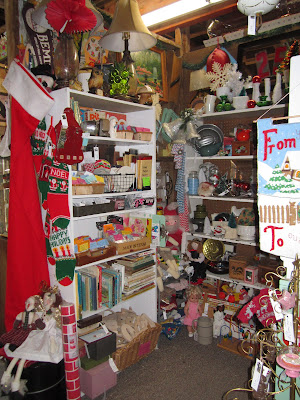 How do you like that 6 foot tall stocking?  I found that not too long ago.  I would hate to have to fill it up!  I mean, for SANTA to have to fill it up.....*Cough*  The tall white shelf holds the ephemera - letter car packets, Scrabble letter words, Scrabble tiles, Marquee letter words, old books, wooden letter cutouts, ephemera packets, packets of old keys and vintage games.  On the top shelf I have the owls and 60's stuff that I really don't care about buying or selling, but the do sell, so I do buy them.  I believe it using all the space I have - from the floor to the ceiling.  There's a lot to look at, but it's all neatly organized so people generally see what they want. 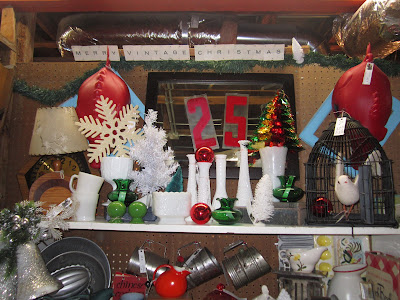 I attempted to get a little artsy with my displays this time.  It looks better in person.  There is a huge fluorescent light above my booth which makes it the best lit booth in the store, but makes it really hard to photograph.  Not to mention that lovely silver heating duct that is up there.  Only in Arkansas can you use Hog hats as Christmas display. 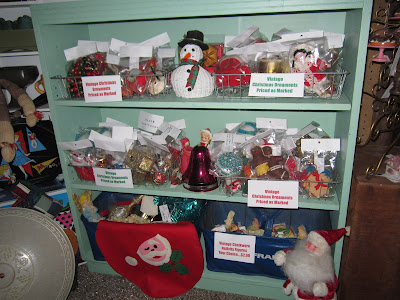 I've had this green shelf in the booth since the beginning.  It was actually in my old booth before that.  It cost $5.00 and was an ugly brown, but I painted it the lovely minty green.  People are always wanting to buy it...but, NO! 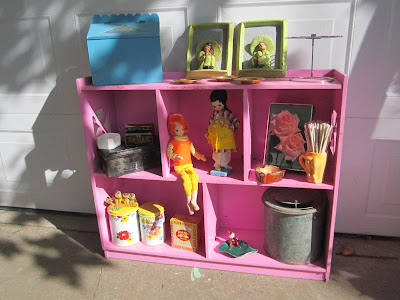 When I bought this pink shelf last week for $5.00, I hoped it would fit on top of the green shelf I already had.  I painted it white and hoped for the best. 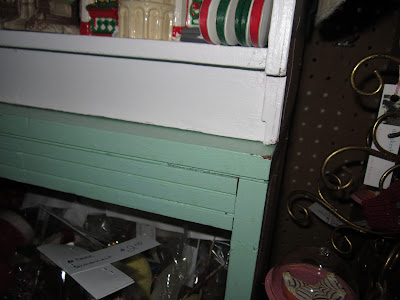 When I sat the white one on top - perfection.  They were exactly the same width. 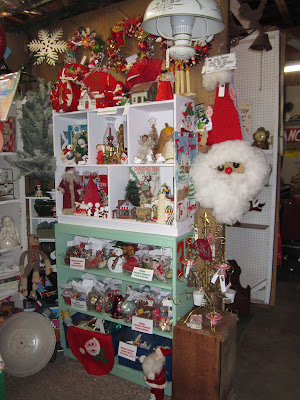 So, $10.00 for the shelves plus FREE paint I got in the mail and I have a wonderful display area.  I love the cubby effects of the white one.

I had a lot of individual ornaments that I wanted to sell.  I didn't want to try to work in a tree to display them on and I knew they would get tangled up in a tub or a box.  I ended up putting one to four ornaments in a cellophane treat bag, stapling the top then adding a folded over index card to make it look like a package.  I put them in old metal letter trays and now you can pull out a tray and look at the ornaments.  One lady was looking at them today and said my packaging was "brilliant".  Now, I don't think I would go that far, but I do think it worked out well.  I also used a couple of the Ben Franklin baskets on the bottom shelf.  One holds miscellaneous items I could't find a spot for and one holds about fifty Chalkware Nativity figures. 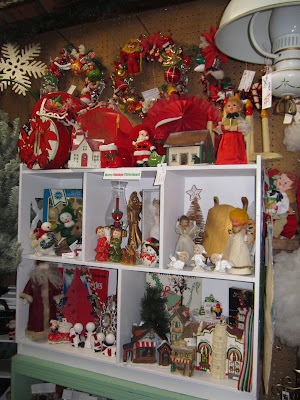 The cubbies each hold like items, snowmen, angels, Santas, Village items, etc.  More vintage on top and an assortment of my "Kitschmas Wreaths" on top.

Thanks for coming along on the tour.  Now, wish me luck that it all SELLS!

*My favorite and least favorite quote of the day:  "I bet all you do is shop."  Uh no, I don't, thank you.  I have a nice stockpile and, yes I do shop, but not all the time!

**One lady came in to work her booth  - her arms were loaded with Lowe's and Walmart bags.  She had stopped to buy garland, lights and ornaments to decorate her booth.  I needed those same things this morning, but I stopped at the Super Cheap Thrift and picked up a trash bag full of new garland and LED lights for $2.00 plus two dozen new red glass ornaments for 75¢.  I don't see how people can make money when they spend $50.00 on decorations.  Also, I am amazed when people come in and work their booth, then walk around and spend $50.00.
Posted by Shara at 11:38 PM