Thrifting Without Leaving the House

I have a cold.  A really bad head cold.  The kind that makes you nose drain without any notice one second and then, inexplicably, the next second, you cannot breathe because it is completely stopped up.  The kind of cold where you wake up and your pillow is stuck to your face due to the aforementioned nose draining and the drool from sleeping with your mouth open.  And your hair is all greasy and sticking up in weird directions from the Vicks you smeared on your throat the night before.  You know the kind of cold I mean?  Oh, it's great fun.  (Sorry for the terrible awful images I just put in your head.  Too much information, I know.)

On to the thrifting.  Tuesday I made my usual quick run through the Super Cheap Thrift Store on the way to open the Flea Market.  I was looking for vintage Christmas stuff for me.  When I was looking in the kitchen area, I spotted a box full of plates that looked like ice cream cones with cherries and sprinkles.  There were twenty plates and they were only $5.00.  When I saw them I told myself that they were cute, but a) they were heavy, b) I was trying to watch my spending and c) I had no use for 20 plates, so I left them there.  Then about ten minutes I arrived at the Flea market I thought, "Helloooooooo, I could have put them in the booth!  Ack!"  Proof that to this day, whenever I go thrifting, I am primarily looking for things for ME.

I thought I would g back to see if they were still there on Thursday, but that's the day I woke up with my cold.  I was in no mood or condition to go out of the house, so I figured they were gone for sure.  Even though I knew they were most likely gone, I looked them on on ebay anyway.  I learned they were Oneida Waffle Cone Dessert Plates.  But, oh well, they were gone.

Fast forward to today.  Saturday.  I'm still sick and not in the mood to get out, but I still wonder about the plates.  The Breadman calls on his way home to tell me that he has had to backtrack to deliver some bread to a store and is on his way home....."Did I need anything?"  He meant bread, milk, a malt, some Kleenex, cough syrup, etc.  But what I did I ask?  "Could you stop at the thrift store and go to the kitchen aisle and see if you see a box of plates that look like waffle cones and then buy them?"  Uh.......He couldn't really think of a way to get out of it so he said, "Ohhhhkay?" 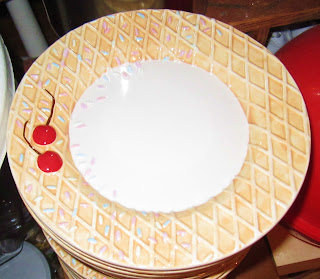 Ten minutes later he arrived at the door with the plates!  He didn't have to call me to guide him through the store or anything.  He just walked in and found them. 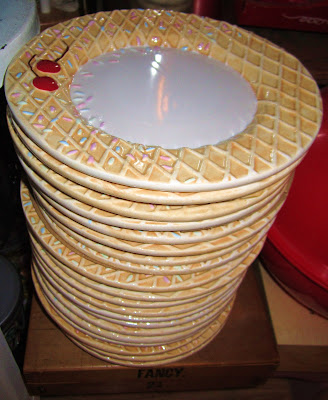 All twenty of them!  I think I am finally training him right! 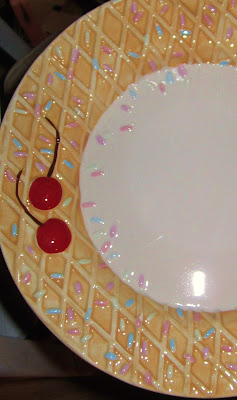 Aren't they sweet?  I mean they literally ARE sweet.  Wouldn't they be fun at a party for a kid or a grownup or just about anyone?  I don't know what I am going to do with them for sure, but I GOT 'EM!  Whenever I get my taste back, I am gong to have something on one of them.  Mmmmmm!
Posted by Shara at 11:24 PM