Thanksgiving: Trying to Be Thankful

We are having Thanksgiving Dinner in my family on Sunday.  So, I better show my decorations before I send them all to the garage for another year.  I have more Thanksgiving/fall things than I should, but after I take down the Halloween and before I put out Christmas, there is a whole lot of empty space, so I fill it up with Fall stuff.  Any excuse to buy something if the price is right and hoard it. 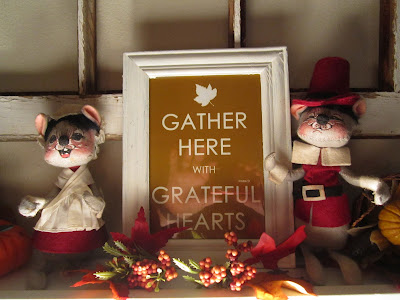 Annalee mice Pilgrims are a must. 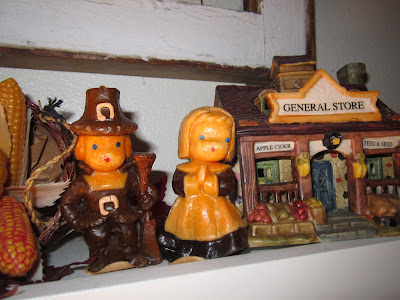 Gurley Candles too.  Have you noticed the Gurley Pilgrim candles in my header?  Waaay over on the far right?  Obligatory General Store for my Grocery Store collection. 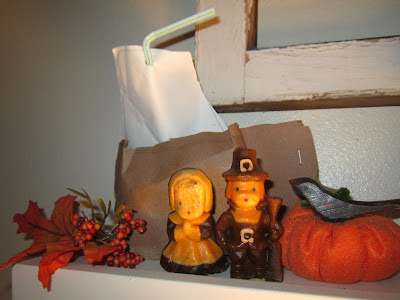 Sad half melted Gurley Pilgrims.  Face kind of has a burlap texture to it.  But, I saved them for a sale for 25¢, so they have a good home now.  What's that behind them?  Why, the Mayflower of course!  Constructed of a milk carton, construction paper and a straw by a much loved Kindergartner Bean.  (Those are the best kinds of decorations.) 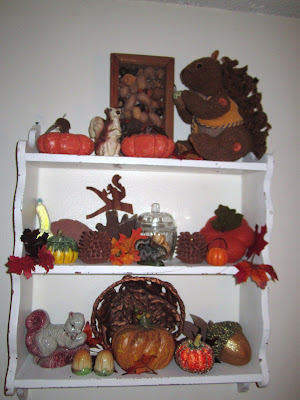 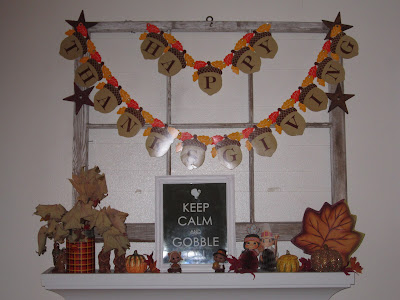 Window above the couch.  Nice view, eh?  :)  The vintage thermos on the left had pretty fall leaves in it from the tree out back.  But then only lasted about three hours before they were brown. 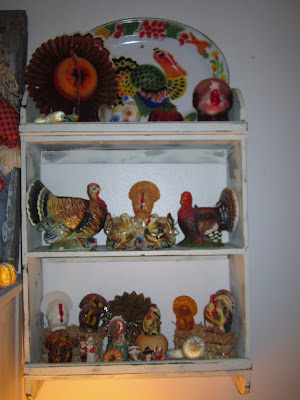 The turkey collection.  Mostly salt and pepper shakers, but no only one pair.  I find single turkeys all the time.  But, only one pair.  And it was such an UGLY pair, I can only imagine that they were never used so they remained intact all these years. 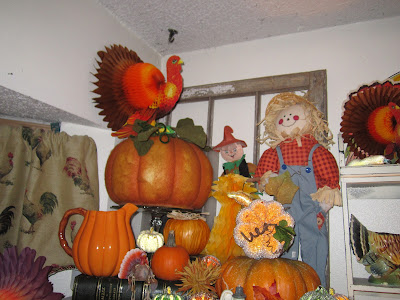 Pumpkins, turkeys, and scarecrows.  I like to pile it all up. 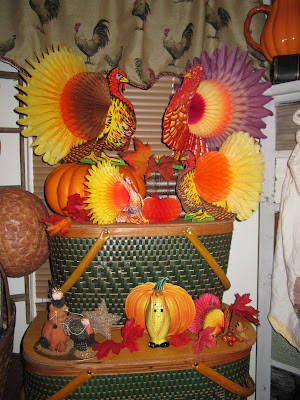 One of my favorite areas - I love the old honeycomb turkeys.
I think they look good on the picnic baskets too. 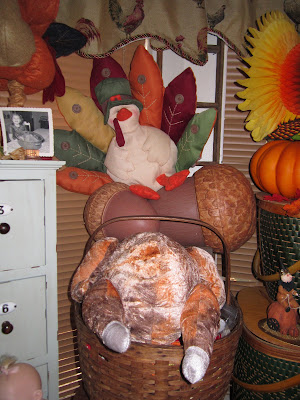 Now here's a weird area.  See that turkey?  Not the gobble gobble one in the back, but the "Mmmmmmmmmm......Tear me off a drumstick" turkey in the front?  Well, that's not just any stuffed turkey.  It's a HAT.  And it plays "Turkey in the Straw" while the drumsticks dance.  What?   You don't have one of those?  Hmm.  Don't tell anyone I do, 'kay?  (It was a recent find at Lowe's on Halloween and was reduced 80% so it cost about $3.00.) 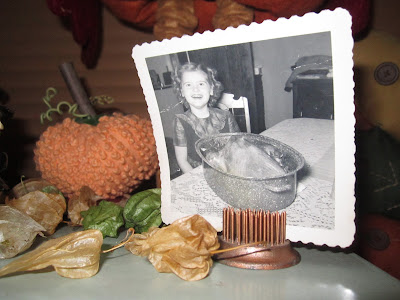 Now, this is my favorite thing.  That is my Mom when she was a little girl posed by the turkey. And, she certainly looks happy about it.  I showed it to her not long ago and she said, "Well, I have always enjoyed a good turkey." 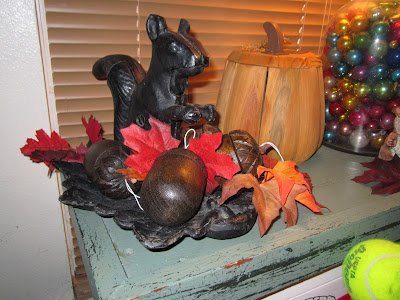 Another squirrel, a pumpkin and a hint of what is to come......

**Trying very, very hard to be thankful this year.  But, it is super hard.  I'm sure everyone has seen on the news about Wonder Bread/Hostess.  As I write this, no one really knows what is going to happen.  The Breadman might not have a job soon and that is absolutely the most terrifying thought I have ever had.  He isn't even employed by Hostess.  He works for a distributor that gets the products out into the stores.  So, the people striking are affecting a lot more people than the 18,000 people they are quoting on TV.  Also, it seems to be a bit of a running joke - "Oh well, no more Twinkies.  Big loss. Ha ha."  Interstate Brands makes so many other products than just Wonder Bread and Twinkies.  They make the generic store brand breads that Wal-Mart and other stores carry.  They make the buns for Sonic, Chickfil-A, Hardees and many more National Chains.  They service school systems.  Sure, they make snack cakes like Twinkies and Ding Dongs, but also fruit bars and granola bars.  They make breads like Wonder Bread, but also Whole Wheat, Whole Grain and all sorts of healthy varieties.  They make tortillas that are used in restaurants and sold in stores.  They service Mom and Pop stores for their shelves and for their delis.  They service small town restaurants for their hamburgers and hot dogs.  They supply buns for high school football concession stands.  It's not just about the Twinkie.  It's about the lives of thousands of families.  Maybe mine.  And, that, is some scary stuff.