The Week In Junk: Christmas in July


Thursday morning I spotted a Craigslist ad for a sale at the house across the street from the house directly behind me.  Now, there can't be a sale within walking distance that I don't go to - so off I went.  It was advertised as a HUGE sale.  HUGE flop, is what it should have said.  Pile of clothes on a tarp, misc. crap on a tarp and some baby stuff in the garage.  Boo Hiss.  I did buy a new expanding cutlery tray for my kitchen that was still wrapped in plastic - but what a B-O-R-I-N-G purchase!

Since I was already out, I decided to make a drive to the end of the town both directions.  I'm not sure if I have mentioned that I live in a itty bitty town.  It is 1.8 miles from one city limit sign to the other.  So, it doesn't take long to drive through the whole city.  Luckily, at the stoplight (yes we even have three stoplights!) I spotted a bright yellow YARD SALE sign with an arrow on it.  When I got there, there were two ladies carrying out tubs and I was the only customer.  I asked it they were ope and they said that they were setting up, but come on in and look.   It was noon, by the way, so I wasn't exactly an early bird.

They had a lot of items, but only four categories of items.

Category #2:  Porcelain mask collection.  You know the ones - white with black decor, maybe a jewel or a feather on it.  Not for me. 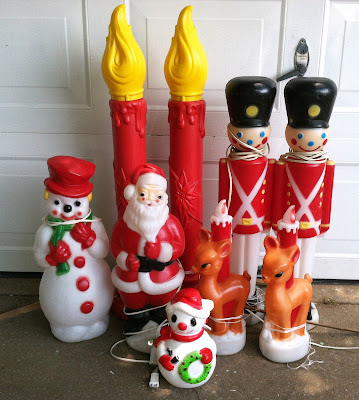 I pulled out the Santa and the two snowmen to buy no matter what and asked the price.  "Oh, just give us what you think they are worth." she said.  Ack.  I hate that.  I said, "I'd really rather you tell me what you want for them," I said.  "Oh, ok.  How about 50¢ each?"  So, you can see that I was greedy and took them ALL!  Nine blowmolds for $4.50.  I'm keeping the three I had picked out and will be selling the rest.  Although The Bean keeps telling me that the candles are "cool".  I told him that if I can work them into my outside decor without it crossing the line of vintage kitschy cute to "Holy Hell look at that house with all the Christmas Crap" we can keep them.  We are seriously riding that line now.  Gotta be careful! 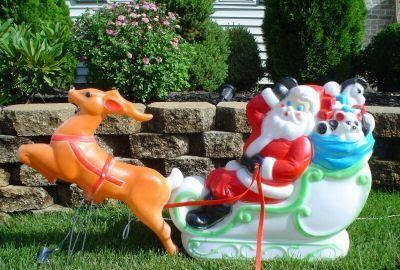 I left behind a big Santa in a sleigh like this one but it had three reindeer.  I was buying so many, and they were big, so I thought they would cost more, so I just left them.  But, all night long, I kept thinking about them.  Even though I just bought nine that very day and they are siting on the porch and I look like a complete lunatic on this 109 degree July day.  So, I decided it would be crazy to go back for them.  I had enough.  Nine blowmolds is enough for anyone.

HA-HA-HA Of course, I went back for them.  What am I crazy?????  Paid $5.00 for the Santa in the sleigh plus the three reindeer.  Tomorrow I have to attempt to shove them in the storage building.  Those things do not condense well.  :)

The ladies told me that their "Daddy" started collecting elephants in the 1950's and he got them from everyone for every holiday from then until he died in 2003.  They had boxed them up because "Mama never liked those elephants" and they hadn't been unearthed for nine years.  They said he had over 5,000 at one time, but the family had taken some and they had donated the big ones.  So, they had five of the BIG totes chock full of elephants.  I love collections like that because even though I don't collect elephants nor do I know anyone that collects them, I still knew I could find a treasure in all those elephants. 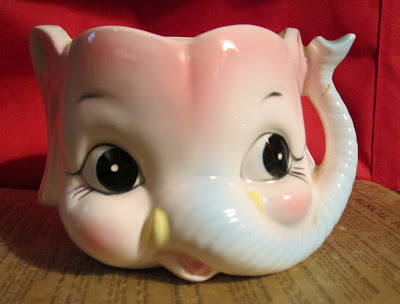 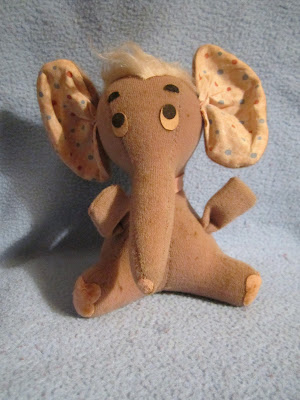 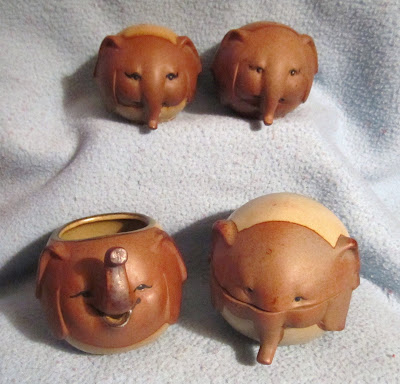 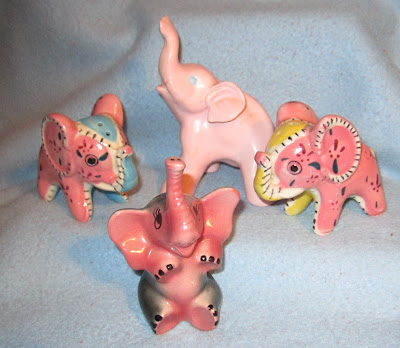 Elephants of the PINK variety. 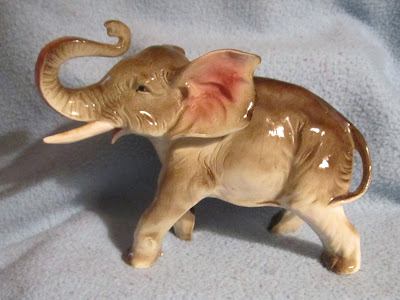 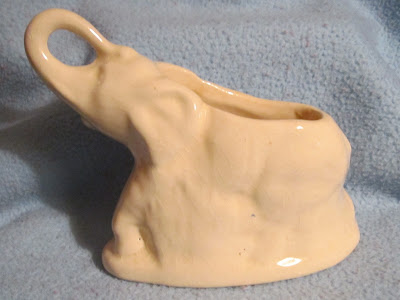 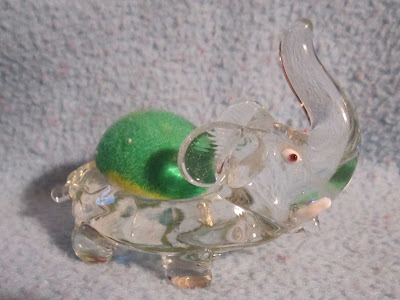 Vintage glass elephant pin cushion to keep.  I have a cat just like it.
(Oh no, that is two....you know that three makes a collection.....) 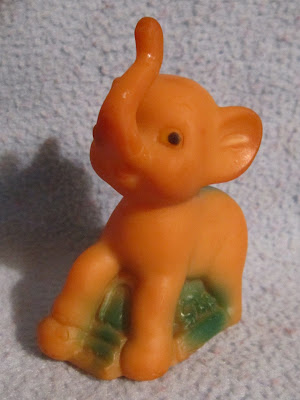 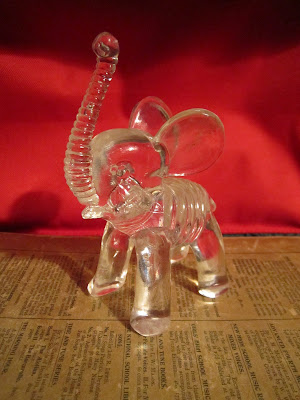 A vintage plastic carnival toy elephant to keep.
(Have I ever mentioned I collect these?) 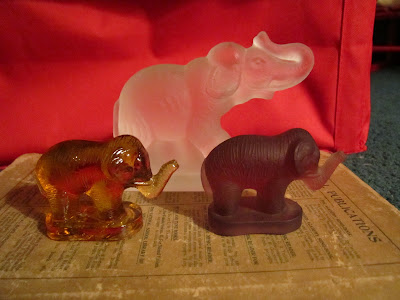 Elephants made of glass.  The clear one looks like it could be something good.  Something to research.

But, there's this one block over:

And a sale at the grocery store parking lot.

And a fundraiser at the garden shop.

So, you know what will happen.  I can always do that other stuff on Sunday!