Today it was hot again.  Nearly 100 for the millionth day in a row.  I know it is hot everywhere, so no one wants to hear me talk about that.  My Mom had a doctor's appointment today and I wanted to be with her for it.  So, she left her house and I left my house and we would meet there.  And, from the time she left until I left, a HUGE storm came out of nowhere.  The temperature dropped to 68 degrees and it rained and rained.  Which is a good thing.  Something we needed so badly.

I like to stay off the Interstate and I am a big fan of "back roading" it whenever we go anywhere.  I was on my normal route to the doctor when the storm came up, so I pulled off the road for a minute for it to clear up.  You could not see twenty feet in front of your car.  It cleared up a bit, so I sent on up the road.  The road I usually take was closed for construction so I had to detour through a residential area and that brought me out on the road I needed to be on, but farther out that I wanted to be.  But, I had to take that road, go down to the light, go down that street then back track to the street where the doctors office is located.  But, i never got that far.  I came over the crest of a hill and the traffic was really thick because of the re-routing.  The traffic was backed up, but I had time and room to stop, so I applied my brakes.  The car stopped, but it kept on going.  I was sliding straight for the car in front of me.  I had time to see there were cars coming towards me in the other land, so I couldn't go that way or I would be hit head one.  And, if I took the ditch, the car would flip over because it was so deep.  So, I had to watch us slam into that car. 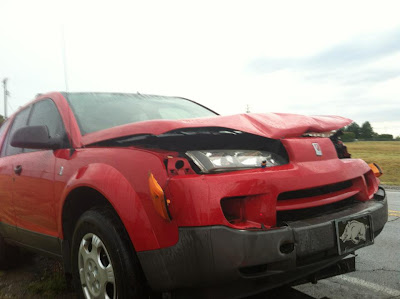 I did the good Mom thing and braced my baby in the seat next to me.  :)  He was okay except for a red mark on his neck from the seat belt.  I was fine.  The lady I hit was fine.  The guy she hit was fine.  Both of their cars had very, very little damage.  But, since I hit them, it's my fault according to the ticket I got.  It was raining so hard and it was on a hill so the water was just pouring down the street.  I stopped the car, but the car didn't stop.  It was an accident.  I am just sick about it.  The Officer kept asking The Bean his name and birthday at random times whenever he passed by.  I guess he thought maybe he was driving, but the lady said she saw "the lady in the red car coming at her".  :(   The Bean took care of me and was really worried about me.  When it was all over and they towed the car away, he broke down.  He is such a strong kid for him Mom.  But it upset him to see my upset, knowing I was worried about my Mom, the ticket, the money, the car, etc.  I love that boy.

The ironic thing was that I was just talking to him about driving in the rain and being so careful and watching out for the other guys.  Then, BAM.  I had also just expressed a wish for a rain coat.  Who knew I was getting ready to stand in the rain for the next hour and a half.

Now I have a Court date and I don't know what that means (I know I have to go to Court).  But, golly, it was an accident.  The Officer sort of hinted that maybe it wouldn't go on my record because of the rain.  But, he also mentioned "fighting the ticket with a Lawyer".  I'm not fighting it, but it was an accident.  I wasn't speeding or driving carelessly.  I hydroplaned - plain and simple.  The Officer said there were wrecks all over.  I don't want to plead "Guilty" or pay a ticket if I don't have to, but the thought of Court really freaks me OUT.  Anyone else been through this?  I is skeered.

*For the record, my Mom's appointment went fine - she could have received some potentially scarey news, but she is FINE.  And, that is worth a smashed in car any day.

**Edited to add - The adjuster called.  My insurance may go up, but only a tiny bit.  I don't have to go to court.  Just pay the ticket and forget about it.  In AR, if you hit from behind, you get a ticket - no getting out of it.  Pbbttt.  The car is going to be fixed like new.  I hit someone with the same insurance company as me, so as a weird and wonderful "reward" my deductible is waived - how insane and fabulous is THAT?  Enterprise is picking me up at 1:00 in my spiffy little Chevy Aveo.  We don't have to pay a deductible, free rental car, towing is paid and the car will be fixed with zero out of pocket.  Yeah, Shelter!  So, today is a BRAND NEW DAY!
Posted by Shara at 10:45 PM