I love smalls.  I collect smalls.  I sell smalls on ebay.  My booth is packed with smalls.  You do know what smalls are, don't you?  Small stuff.  Little things.  I watch American Pickers and I see them buy HUGE signs and old motorcycles but they walk right past cabinets full of cool old smalls.  I guess they only buy Bigs.  Not that that is an actual thing.  But, you know what I mean.

The people that own the Flea market let me put things throughout the store and not just in my booth.  I only have vintage things in my booth, but from time to time I see something that I know would sell, but wouldn't necessarily fit in my booth in style or in size.  It's nice to be able to put things in the window display, outside on the sidewalk or in the furniture room.

This week I started picking up some bigger things that I normally wouldn't have in the past.  First I bought an old metal toleware light fixture.  I never would have bought it in the past since shipping it would have been a nightmare. 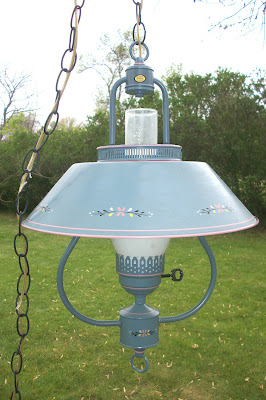 Mine looks like this one except it is white with gold accents.  I think it will sell quickly.

I bought a very old framed mirror with beveled edges.  It weighs a ton. 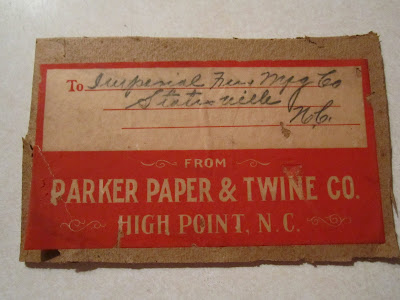 It's nearly impossible to photograph a mirror, so I didn't even attempt it.  This old paper label was on the badly dilapidated backing.  Parker Paper and Twine started in 1906.

This afternoon on the way home I saw a house had been cleaned out and there was a pile of stuff by the street.  Being the chicken I am, I waited until the cover of darkness and went back to see what was there.  The things I had spotted that looked promising were gone, so I didn't get anything.  But, I decided to take a ride around the neighborhood and have a look at the curbs. 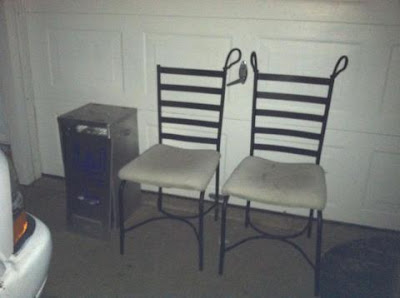 I found a new in the box Electric Smoker.  Brand new, never used.  Not sure if we will use it or not, but I know I can throw it on Craigslist.

The chairs were stacked on top of each other right by the curb so I knew they were in the trash.  But, there was a lady out watering her plants (in her nightgown, I must add!) so I didn't stop.  I went around the block many, many times, but she was still out there.  Finally, I just got my nerve up and asked her - "Are those chairs in the trash?"  "Oh sure she said.  Take them!  I think I saw you drive past a couple of times.  You should have just asked then"  I told her that I love going out looking for curb finds but then I get chicken to actually grab stuff.  She said, "Well, if it makes you feel any better - I found them on the curb myself but never got around to fixing them up."   They are in good shape, just need to be painted and recover the seats.  I'm going to paint them a pretty Robin's egg Blue and cover the seat with an old cutter tablecloth I have.  The curly Q things on the top come off - one is already missing, so I will just take the other three off.  I think I have some interesting cork bottle stoppers that will fit in there to give them a little pizzazz!  Off to the booth they will go and we will see what happens.  Wish me luck!