This morning I saw there were a lot of sales right in my area so I took an hour to go hit as many as I could.  Here's the rundown....

Sale #1 - Sign on the corner said, "Sale" with an arrow.  When I got to the dead end street there was a house with no cars at all.  There was a guy sitting on the porch wearing a wife beater, backwards hat, smoking a cigarette and no shoes on.  The sign on the door said, "STUFF INSIDE".  Since you are reading this, you can see that I did not go in and I am still alive.  Whew.

Sale #2 - Followed the signs with the brightly colored balloons tied to them all the way down a street, across an intersection, turned right then down another street to see more signs with brightly colored balloons in front of a house that was completely void of cars, junk or people.  Not sure what happened, but couldn't they have taken down the sign?

Sale #3 - Spotted old lady handwriting on a sign.  You know, the old shaky YARD SALE with an arrow.  My favorite!  Pulled up and spotted two older ladies sitting on the porch with boxes surrounding them.  Old lady boxes - woohoo!  Went up on the porch only to discover jeans, sweatshirts, old man shirts and three pieces of very bad home project pottery pieces.  I fussed over the dog a bit to pacify them and hightailed it out of there.

Sale #5 - I followed signs farther than I should have but I was desperate!  This sale had tables full of Pharmaceutical items out for sale.  I used to be able to sell a lot of that stuff, but I don't know if any of it is worth anything anymore.  I spotted a no touch soap dispenser in the sealed box for 50¢, so that became my first buy of the day.  I've been wanting one of these for the kitchen for when I am handling chicken.

Sale #6 - There is a lady that has a few sales a year that I LOVE going to when I know she is having one.  I happened by her corner and saw her signs.  FINALLY!  A good sale.  When I got there she said, "I was hoping you would have come yesterday.  We had a LOT then."  Boohoo.  She never has anything very valuable at her sales, but she always has lots of little stuff and big grab bags full of oddities.  I can spend $10.00 and bring home bags of stuff.  She has several booths, so she really is just selling off the extras she gets in box lots at auctions.  But, I still find good stuff there. 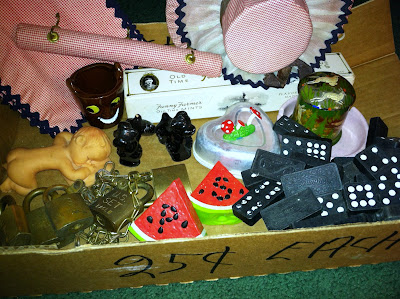 I called The Bean to tell him I was on the way home in about ten minutes.

Sale #7 - These people buy storage units and always have a mix of items.  Today I spotted a bunch of old racing trophies with cool cars on them from the 1970's.  There were about ten in the box and after much hemming and hawing, they decided that $50.00 would be a good price.  Do you think I bought them?

I picked up The Bean and we did our running around for he day.  When we got home, we discovered a HUGE box of Shari's Berries on the porch.  I took it in the house and opened it to read the card and the box was ALIVE with ANTS.  They went everywhere.  They were in the cardboard, the Styrofoam cooler, the ice packs, the packaging, and crawling all over the beautiful strawberries.  I have such a hatred of ants in the first place, then to see them all over those gorgeous strawberries, well, I went a little nuts.  Then I spotted the ants crawling down my cabinets.  Noooooooooo!  I threw them in the driveway.  I was upset - the UPS man should have set them up on the table by the door.  He should have left them with a neighbor.  He shouldn't have left them two inches from the landscaping on concrete in the sun, no less.  I decided to call Shari's Berries and tell them what happened.  My goodness - the lady that answered was SO NICE.  He was freaked out about the ants.  "I hate BUGS!" she said.  She filed a complaint with UPS and is sending me a replacement order next week on a day that I will be home all day.  I still can't believe how very nice she was - thank goodness!

I got all the ants cleaned up and out of the kitchen.  Threw out the strawberries and decided to go through my yard sale purchases.  I picked up the cardboard flat of 25¢ items and the end of the box popped open and everything hit the ground.  Five things broke.  This was turning out to be a great day.

I opened the soap dispenser to get it working.  The box was sealed, but the packet of soap had turned very brown, burst and adhered to the dispenser resulting in a disgusting mess and a brown stained dispenser.  In to the trash went the whole contraption.

My one last thing was to take the watermelon salt and pepper shakers out of the box.  While doing that, I proceeded to dump about a pound of pepper in my lap.  Come ON!  One dust busting and five sneezes later, I had that mess cleaned up.

I'm kind of glad that there is a 100% chance of rain tomorrow.  I don't think I can handle another day of saling like today.

Have you ever just had a generally rotten day?