Today we went to the small country cemetery to put out flowers.  I had never been to a small country cemetery until I married The Breadman.  I'd never had a grave to visit anywhere before we got married.  The only cemeteries that I knew where the big ones in the bigger towns - nicely groomed grass - one arrangement on or near the headstone.

Then I met The Breadman and married into his hillbilly country life.  Honestly.  The stories I could tell.  (And, I really should,  There are some dandies).  Anyway, the first Memorial Day he said we had to go to "Decoration".  I didn't know what that meant, but he told me that it was the weekend that everyone decorated graves at the cemetery where his Grandfather was buried.  I assumed that meant we would wear our Sunday best, drive out to the cemetery and lay a wreath on his Grandfather's grave.  I wasn't warned their would be fiddlin'.  And pie.  At the cemetery.  But, indeed, there was fiddlin'. And pie.  Lots of pie.  A pie auction in fact.  In the cemetery.  People balancing paper plates full of pie on their knees while they sat precariously balanced on old headstones.  While a couple of old men (that appeared to be moments away from actually being in the cemetery) played the fiddle.  Children ran around the cemetery chasing each other, people walked around looking at each grave, something on the people, the flowers and remembering things about each person.   It was just not how I thought anyone should behave at the cemetery.  But, after awhile, I realized that to them, the cemetery and Decoration, well, it's just a part of life.  The people buried there had done the same thing - bought a slice of pie and then walked around the cemetery looking at the names and remembering each person.  It's simply what was done.  We still go and put flowers at his Grandfather's and Grandma's graves.  But, we don't eat pie.

Decoration at that cemetery included fiddlin' and pie.  Decoration at the other family cemetery, which is miles away from the other, also includes it's own oddities.  No fiddlin' - but a big potluck dinner at the church which is smack dab in the middle of the cemetery.  Everyone brings card tables and lines them up in a long row, covers them in tablecloths (I spotted three today that I would have loved for my collection) and then out come the potluck dishes.  There are two main family branches at this cemetery - one of the families has this big potluck dinner - they are not our branch, so we are not included in the dinner.  Which is a blessing to me - I do not think I could sit in the cemetery and eat fried chicken.  But, every year the other family does and and more and more people come so it seems to get bigger and bigger.  It's a nice tradition, I suppose.  If you don't mind eating in the cemetery.

Another thing about country cemeteries is the decorations on the graves.  Not just a saddle on the headstone, or flowers  in an urn.  There are solar lights, Christmas wreaths, Razorbacks, colored rocks, mementos and lots of other interesting things.  Things that will touch your heart.

When we started going to the cemetery all those years ago, the only grave we had to visit was TBM's Grandparents, Great-Grandparents and his stillborn sister.  But, as the years have passed, there are almost more graves to visit that we have time. 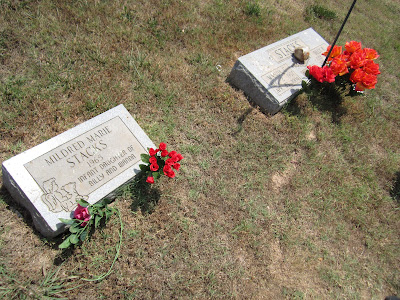 His sister and both of his parents have passed.  All of his Aunts and Uncles except two, friends, neighbors, people he knew when he was a kid, cousins.  Really, it is so sad that so many people are gone.  But when you've been married nearly 21 years, these things tend to happen. 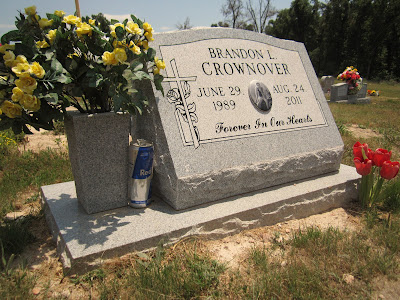 I don't know this young man, but someone had left him a Red Bull.  I'm sure that was something special between him and a buddy. 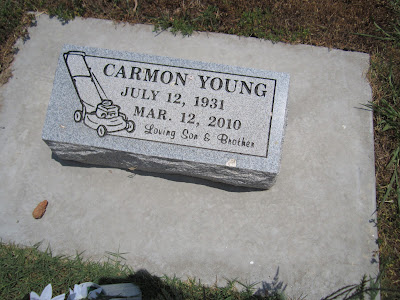 Do you suppose he loved to mow?  Or he owned a mowing company?  Or he liked to tinker on old mowers? 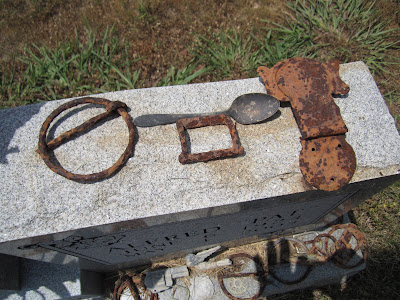 This headstone had lots of old artifacts on it - things that had been dug out and found with a metal detector. I wonder why they brought them to the cemetery.  Did they find these things on his property or did he love to go looking for buried junk?  There was part of an old car hood ornament, an old Sheriff badge and some other things that actually had value.  But no one would ever think of stealing them out there. 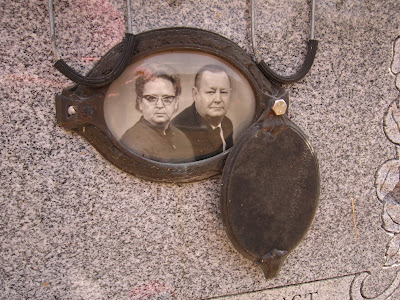 Initially, seeing photos of the person was weird to me.  But, now I like it.  This old photo is sweet and sort of funny at the same time. 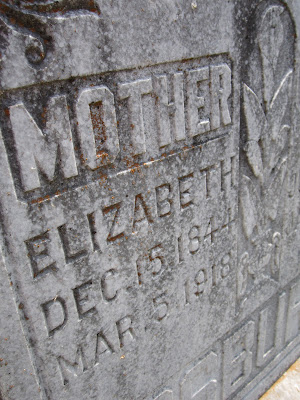 Some of the graves are very old and no one puts flowers on them any more.  Every year I think to myself that I should do it, but I never do.  I really should. 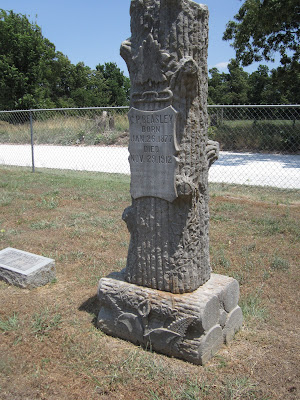 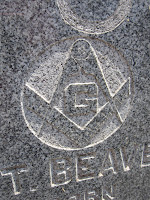 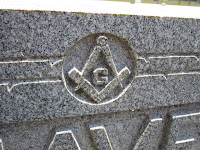 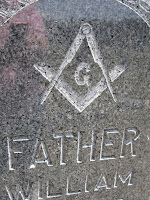 We found a series of headstone dating back to the 1840-1870's and they all had the Masonic symbol on them.  The Bean is fascinated by the Masons so this was very interesting to see.  They were Mason's during Lincoln's presidency.  Isn't that amazing? 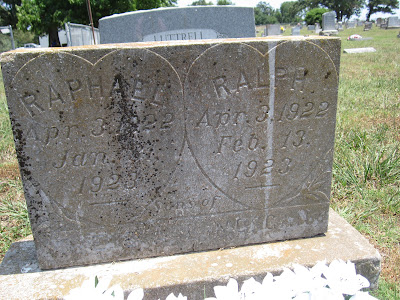 Twin boys - Ralph and Rapheal Born April 2, 1922.  Raphael died nine months later and Ralph died a month after that.  I suspect the Mother's heart broke too. 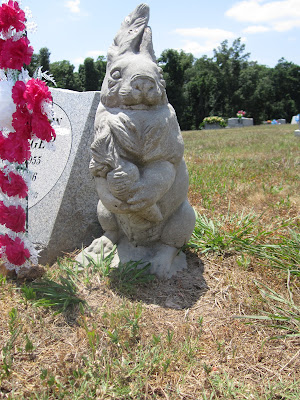 I loved this big concrete rabbit by one headstone. 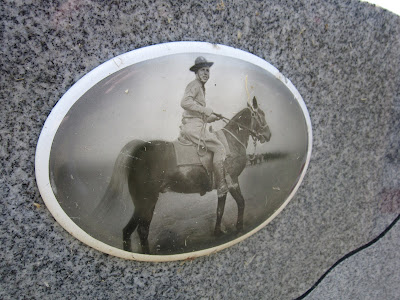 Another photo  - this one is cool too. 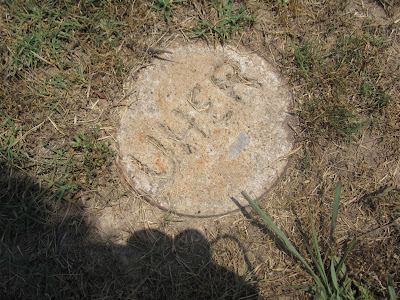 A very simple handmade stone.  It's as sweet and thoughtful as the fancy granite ones. This giant headstone towers above all the rest.  It's about 5.5 feet tall and about 8' long.  The granite is about a foot thick and it is engraved front and back.  I'm sure it cost more than our new car.

I honestly never thought I would be blogging about cemeteries and headstones.  But, they are a part of life and part of our journey.

I hope you had a safe and happy Memorial Day.
Posted by Shara at 11:05 AM