*First and foremost - thanks to everyone that came over to the new monkeybox facebook page.  I was surprised to see so many people LIKE monkeybox!  So many new faces!  Feel free to leave a comment on the page to let me know who you are and how you came to find monkeybox.  I promise not to clog up Facebook with lots of entries and I also promise to keep on blogging.  I love blogging and writing and I will keep on blogging LONG after everyone else has given it up for whatever new techno thing is out there.  :)

Today we had to have brakes put on my vehicle, return our faulty cable box and remote, get gas grab something to eat and buy groceries.  I am sort of a one errand a day kind of girl, so that was a lot to do in one day.  Plus, I was car-less until 1:00 before we could even start errand running.  After doing all that I really needed to get home and put up the groceries, do my chores and make dinner.  But, I had that pesky GIANT dollhouse in the car to donate to Goodwill and since I was out there donating - well, you know the drill.  I made the fastest run through possible.  I had discovered last week that one of the plates was missing from the picnic ball set I bought there and I thought maybe, just maybe it might still be siting on the shelf somewhere.  So, I had to look.  Right?  (It wasn't).

I have a route I take in Goodwill - the same pattern every time.  Today when I went to take my first turn down the first knick knack aisle, I came face to face with a lady holding a folding table and she had the aisle blocked.  Since I was trying to hurry, I went down the next aisle over - an aisle I don't usually go down since it is baby clothes on one side and Halloween costumes on the other.  But, when I started down the aisle, something was peeking out from under the Halloween costumes.  A small round piece of green felt.  And, I knew what it was INSTANTLY. 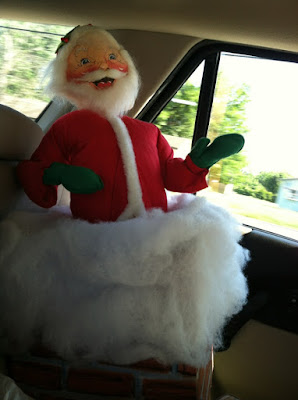 An Annalee doll!  Santa's mitten to be precise! 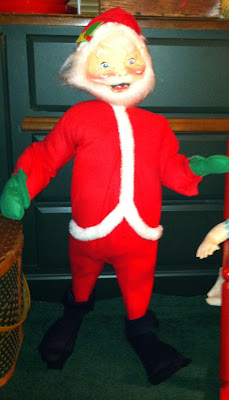 This Santa is 30" tall - my largest so far.  I couldn't believe it when I pulled him out from under that Halloween stuff and saw what he WAS!  I held my breath until I read his price, because you just never know.  Lucky me - the price was only TWO DOLLARS.  He came in a big cardboard chimney with snow on it and I think he might be a store display since he is so big.  TWO BUCKS!

I KNOW some of you don't like Annalee doll's. and I can appreciate that.  I don't like Pyrex.  (DON'T HATE ME THAT'S JUST MORE FOR YOU!)  But, I just LOVE them.  They were one of the very first things I ever learned about when I started buying and reselling and collecting.  And, they were one of the first FINDS I ever had too. 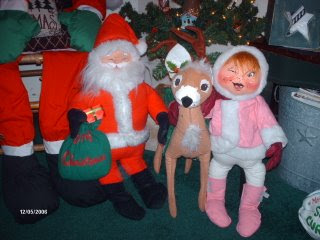 Here's a previous entry about them:
These are my only big Annalee's. The girl in pink and the reindeer were one of the first things I thrifted (when I really began thrifting after The Bean was born and I knew I needed to make money, so ebay seemed the right fit). I saw them in the back of the thrift and my memory is that I vaulted over a couch to get them, but I doubt that I ever vaulted over anything, let alone a couch. But, I knew I had to get them before anyone else spotted them. They were $1.00 each.

Lesson learned:  Never get mad at the lady blocking the aisle. You might just find something that you would have missed.
Posted by Shara at 11:33 PM