*First - APRIL FOOL on that Chocolate Chip Cookie laundry Detergent post yesterday!  I am a member of the Insiders and that was a little April Fool joke from them.

Now, on to the junk!

Friday morning I left alone and hit a couple of yard sales.  Later in the day I went to one of my thrifts stores and to the Salvation Army.  I shy away from the SA on most accounts - there is just no vintage to speak of at all.  But, yesterday I was getting brainwaves that I HAD to go to the SA.  So, I did!  I also only wanted to go to that particular thrift because one of the Volunteers had recently died and I hadn't been in since to tell his wife, who also volunteers there, that I was so sorry.  He ran the register and he was a nice guy and he gave me lump deals on piles of items.  But, he had a deep gravely voice and when you would walk in, he would say, quite loudly, "WE CLOSE AT 4:00."  Now, that was okay when it was 3:30 or 3:45.  But one day we went in and it was 1:15.  He said, "We close at 4:00!" and I said, "It's only 1:15" and he looked at me like he wanted to strangle me, then he threw his head back and laughed and said, "It has been a long day!"  I will miss him. 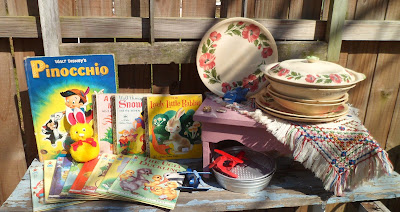 All the loot from all my stops. 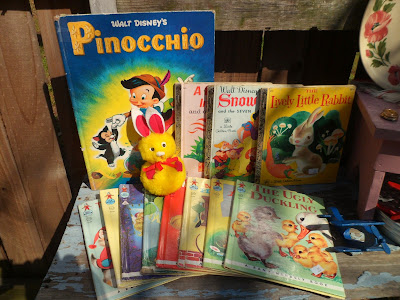 I found all these great vintage books at the Salvation Army.  So, that's what my thrifting mojo was telling me to go find!  One Big Golden Book and three Little Golden Books.  The bunny was bought at the thrift store. I also bought an old wooden play yard, but I didn't take a photo of it.  It's the sort of play yard that you put around your kid while he played in the sand or grass.  I can't believe they had it out at the thrift since the rules on selling baby things are so firm.  I thought I could use it in the booth to wrangle things. 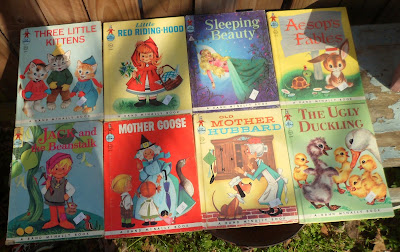 Eight Junior Elf Books which I was happy to find.  They were in a neat little clump on the book shelves, so I am sure they came from the same family.  The Graphics in these old books are just so darn cute.  They were only 25¢ each, so I can keep them guilt free on my bookshelves until one day, yes, I am starting to think about this - the grand babies come to visit.  That is a LONG way away, but I can justify keeping cutesy  things if I think of them like that!  :D 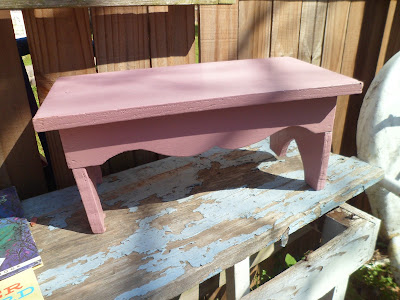 This little vintage pink stool is adorable.  Just the right height for little ones that cannot reach the top shelf in the kitchen.  (That would be ME.)  Also great for staging JUNKY photos. 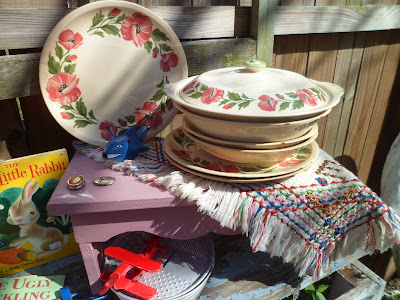 *Also pictured, "toy" airplanes turned out to be VERA, which is odd, plus a neat old metal grater.

I drove farther than I like to get to one sale in particular.  It was on two miles of really bad gravely rocky dirt roads.  I was afraid that I was going to shake the bejeezus out of the car or get a couple of flats.  But, did that stop me?  No.  I just kept on jostling along.  When I finally got to the sign, it led me up a steeply graded rockier than H-E-double hockey sticks driveway.  But, at least I was there.  Whew! 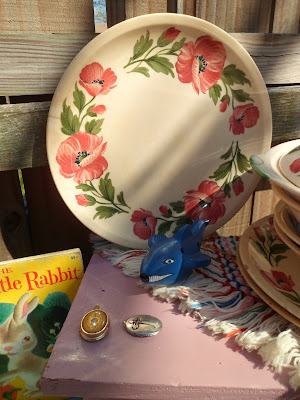 As soon as I saw the lady having the sale, I knew I had stumbled onto Bill and Margie's Sale.  This is a family that inherited all their Aunt and Uncle's belongings and have been selling them off slowly over the past ten years or so.  Not just the usual stuff like linens, clothes and knick knacks - but really personal things like Bill's Purple Heart and personal effects he carried in his pockets while he was at war (I bought this and sold it to a Military Museum in West Virginia), their family portrait (which hangs in my living room now and can be seen in the link above) and a handmade feedsack quilt (which has been at the last three sales, but is higher than I can pay.  But, I have hopes it WILL be mine someday!) 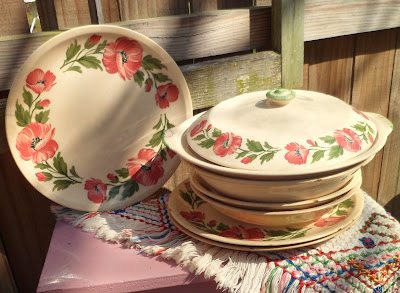 As I visited with the lady she told me that she normally has sales at her daughter's house that is in town, but this was where she actually lives.  That's why I hadn't made the trek through dirt road hell before.  I spotted these dishes and thought they were so pretty.  They aren't perfect - a few chips, some crazing, etc.  but they are pretty just the same.  The top one was priced $2.00, but she told me that was for the whole pile.  As I picked them up, she said, "Those belonged to my Aunt."  "Margie?" I said.  She was not expecting that!  I told her I had bought the Purple Heart and researched the family a lot. (I bet I know way more about her family than she does!) And that I had bought their portrait too.  She seemed proud that I liked their things, even though it is obvious that she doesn't seem to care about them. 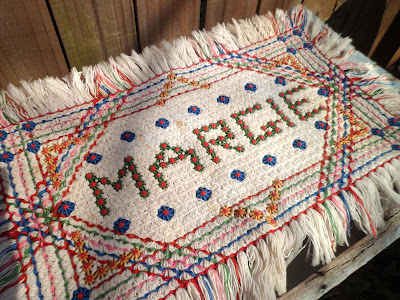 On my final walk through, I dug in a box of linens. It was full of old sheets and towels, but you never know what you might find in a box of things, so away I dug.  I spotted something that looked old and looked handmade, so I pulled it out and saw this old hand made wall hanging!  Margie!  She told me that Margie learned to sew and do things to keep her busy while Bill was in Germany during the war.  I think I might have to frame this - I love it.  Wish me luck on getting that quilt next time! :D

So, what did you find this weekend?
Posted by Shara at 4:36 AM