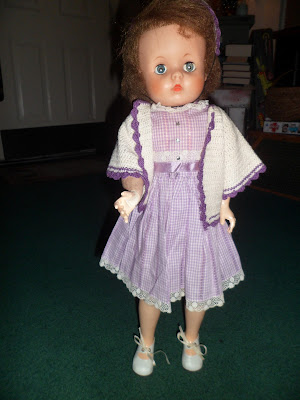 She's an older Walker Doll.  But, what I adored about her is her handmade gingham dress, tiny crocheted sweater and matching hat.  I can't believe the time someone took to make all those things.  She was only $3.00.  I also bought a wooden set of nine pins, which is a tabletop blowing game, for us to play.  That was only $2.00.  And, The Bean scored a Marshmallow Shooter, which was $2.00.

When I went up to pay for those three thins, I spotted a massive amount of vintage Boy Scout items in the glass case.  I have sold a fair amount of older BS items for pretty good money, so I took a closer look at it.  I ended up buying tow gallon size baggies stuffed full for $15.00 each plus an Order of the arrow beret, a bunch of Kerchief slides, belt buckles and pins to round it out to $74.00 for everything.

I have 42 of the items listed on ebay tonight.  Still lots to sort through and list.
Here's the link if you want to see if I do okay or suck. Boy Scout Auctions
Let's hope I don't suck!

*Those paper eggs in the last post are cool - glad you guys  liked them.  They aren't marked Germany, so I think they are Japan.  Not as old as the Germany ones, but still old enough to be vintage and cool in my book.  They have that same paper lining as the Germany ones.  I was so happy they were affordable because I do not think I could have left them behind!  Although, there is one old German one in another booth for $48.00.  I have had NO problem leaving that one behind!
Posted by Shara at 10:49 PM