When I was little, I was a model.  Not a paid for model.  But, my Grandmother owned a portrait studio and she always took a couple of photos of me each year for my parents.  But, sometimes she needed a model to pose for her so she could tryout new lights and lenses and backdrops.  Sometime she would take 100 or more photos of me.  I know that doesn't sound like much now in the days of Digital cameras - heck I can take 100 pictures of trees in the park (and I have) nowadays.  But, back then, the lights had to be reset and different lenses added and removed from the camera and different backdrops had to be raised and lowered.  Oh, and heaven forbid I sore the same clothes in more than a handful of photos - I had to change clothes and redo my hair with coordinating headbands and Yarn Doodles.  If you don't know what a hair doodle is, well, then you are too young to be reading my blog Missy.  :)

When I was five years old, we moved to Arkansas which meant the photo shoots became rarer only when I visited Kansas.  But, when my Grandmother came to visit us -- well that was a great excuse for an OUTDOOR photo shoot.  In the heat!  In the sun!  In the woods!  In the rocks!  On a hill!  On a cliff!  Near some snakes!  Ack!  It's really no secret why there are no photos of me since 1988.  I had a camera in my face for the first fifteen years of my life. 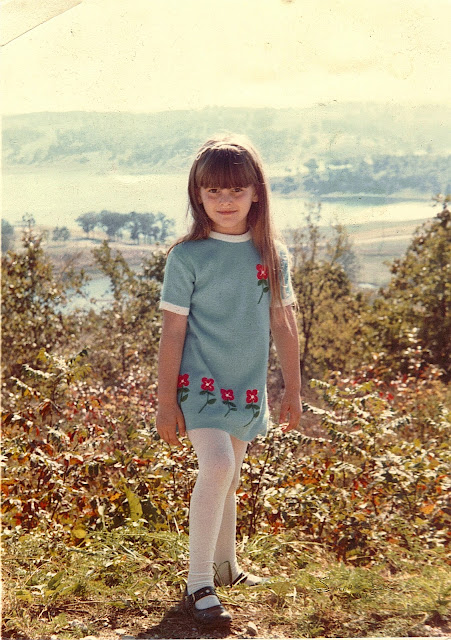 This photo was taken in Arkansas, right down the road from our house on a part of the highway that overlooked the lake.  It became a family favorite.  One of my Uncle's recently told me that this still his favorite photo of me.  This was the first photo we took that day but we progressed to the woods and to the lake and to other hot and dirty places before the day was over. 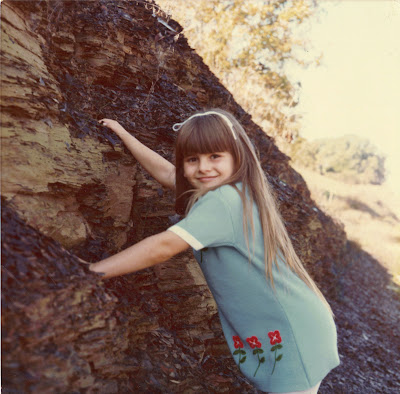 I particularly remember my Mom's face when my Grandmother suggested I jump out of our VW Bus (oh yes we did....) and climb into the Shale Pit in my white tights and new dress.  But, we both knew not to argue, just get it done.  So, into the Shale Pit I went.  **That is not a Yarn Doodle in my hair - that is just an ordinary piece of white yarn.  I remember my knees and hand were black with Shale soot. 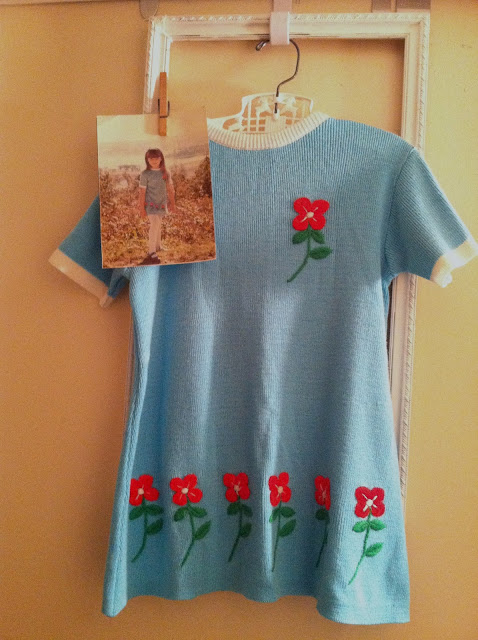 I still have that dress.  It hangs on my office door with a photo of me in it clipped to it.  I love seeing it everyday.  It recently occurred to me how very 1970's it is and how current it also looks.  I think if I had a little girl, she would be wearing it!